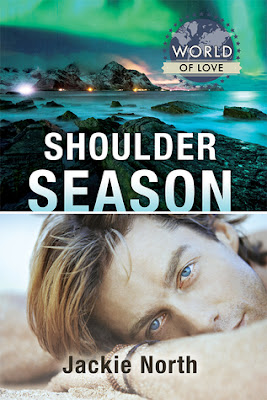 
Two young men from two different countries find a common language as they recover from broken hearts and broken bones. Can they rebuild their lives together?

My favorite MC in Shoulder Season was Iceland. I liked the descriptions of the setting, culture, and people.

Ben is the sole narrator of the story; he's an American who's come to Iceland during "shoulder season" (when it rains all the time) after being dumped by his abusive boyfriend.

Almost immediately, Ben meets Solvin, a true Icelandic god but an injured one. Solvin is still healing, and Ben helps him unload some groceries. Solvin volunteers to be Ben's tour guide. They go shopping for an authentic Icelandic sweater (the "discount" Ben receives was utterly heartwarming and my favorite part of the story) and visit the hot pools.

Sadly, Solvin's character wasn't particularly well developed. We know he's an architect but not much else.

Ben is a rather flat character as well; we learn nothing about his family or background. He talks about his ex-boyfriend incessantly, but Solvin seems to be the cure for all his maladies.

This is a quiet, relationship-driven story. The writing is languid, with more showing than telling.

The ending is rather abrupt: a HFN or tentative HEA if you're the optimistic sort. I had some serious doubts about these two.

Shoulder Season is slow and sleepy. It moves gently and ends with a whimper.