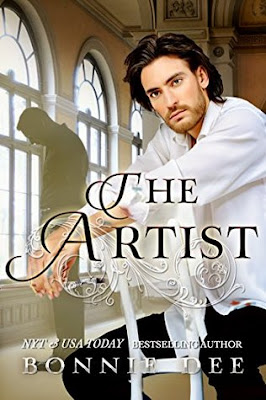 
Creating love from darkness is the greatest art…

Living a bohemian lifestyle in Paris is wonderful for Teddy Dandridge, but disastrous for his finances. His unconventional artistic creations find few buyers. After a year of failure, he returns to England to fulfill a portrait commission for a wealthy family, but he finds a different, source of inspiration secreted away in their sprawling house.

Isolated and rejected by his family, Phineas Abernathy haunts the west wing like a ghost. A physical deformity has locked him away from society for all his life. Filling his days with reading and drawing, he dreams of a life that seems unachievable…until irreverent, opinionated Teddy explodes into his quiet world.

Intrigued by the kind and creative man beneath the ungainly exterior, Teddy gives Phin nightly drawing lessons. A private friendship is born as the men share life stories, future hopes and a growing attraction. Phin agrees to pose for a portrait in which Teddy tries to illustrate the depth and beauty he sees in him. He also guides the eager virgin in the ways of love between men.

When persecutors from Phin’s past arrive at the house, the slights and hurts he has suffered his entire life boil over. He must at last be brave enough to emerge from his cocoon and venture into an often cruel and judgmental world. And Teddy must decide what matters most to him.

Set in 1902, The Artist begs the question, What makes a person beautiful?

Phineas has been hidden away by his family for twenty years. Born with a craniofacial anomaly (close-set, asymmetrical eyes, protruding forehead, weak chin) and meromelia (a shorter malformed left arm), Phin thinks of himself as a monster because it's how he's been treated. He keeps to his wing of the house and loves his wild garden where all kinds of creatures live; the garden is his sanctuary.

When an artist is commissioned to paint his younger sister's portrait, Phineas finds color in an otherwise grey and drab world.

Teddy is dashing and lives outside polite society. Once a bohemian in Paris, Teddy is trying to make a living painting respectable portraits of young ladies. Teddy wears his hair long, and his eyes sparkle.

I loved the way Teddy and Phi's friendship developed. Teddy pushes Phin outside his comfort zone and makes Phin question his lot in life. Teddy becomes Phin's teacher, his one and only friend. Phin doesn't think someone as handsome as Teddy could desire him, but Teddy sees much more than Phin's external appearance. Teddy is an artist; he sees beauty where others don't.

This is a slower-paced novel completely focused on the relationship between the men. The MCs are vibrant, complex characters. They spend time together in the evenings: Teddy giving Phin art lessons and painting Phin's portrait in an abstract style, and Phin yearning for Teddy's touch.

Hurt/comfort stories are my kryptonite; watching Phin become a man—not a child as his butler would have it and certainly not a feeble-minded "cripple" as his family treats him—made me tear up something fierce. Phin's family made Phin feel like a burden, an eternal source of shame.

I hated Phin's mother. She was a capricious, judgmental, selfish woman who expected gratitude and obedience for not putting her son in a mental institution—her kind, intelligent, beautiful boy. How could anyone be so blind?

I can't say I liked Phin's father, cousin, or brother more, but his sister, initially appearing as superficial and mean as the rest of her family, showed some maturity as the story progressed.

The most interesting secondary character, however, was Ledbetter, Phin's butler and caretaker. I happened to agree with Teddy regarding Ledbetter's vile behavior, but Phin had allegiance to the man, even after all Ledbetter had done to keep Phin and Teddy apart and make sure Phin never escaped his misery. I think Ledbetter relied on Phin as much (maybe more so) than Phin depended on him.

The story is lower on the steam, but Phin's sexual awakening is a wonder to behold. The last scene in the book makes creative use of paint on a rather unusual canvas.

My one criticism is that the ending, a tentative HEA, feels somewhat rushed. At one point, months go by while Phin and Teddy are apart. Phin makes a brave decision and truly grows as a person, yet we're not privy to this on page. It's merely summarized in retrospect. I was terribly disappointed.

Even so, The Artist packs much emotional depth into a shorter novel. It's well written, descriptive, and nuanced. I highly recommend for fans of historical romance.