Review Tour: Stag and the Ash by Sam Burns 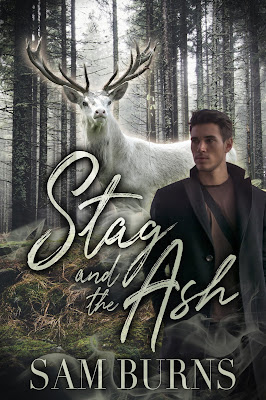 Jesse Hunter is finally trying to be an adult, but it still feels like an act. His place on the town council is a sham. He’s rarely called on to do anything. His boyfriend is grieving the loss of his mother, and while everyone seems to think he’s doing a great job caring for Sean, Jesse feels like he’s more of a distraction than a real help.

March is shaping up to be a bad month. First, random chance leads him to the realization that the town’s recent trouble is his fault. Then new werewolves come into town, and it turns out they’re also Jesse’s responsibility. He feels like he may be at his breaking point, and he doesn’t want to drag his friends and loved ones down with him. But how will he handle it alone?

This is the 2nd book for Jesse and Sean, continuing shortly after where Hawk and the Rowan ended. Jesse still struggles with his place on the town council, with being the Alpha wolf, with having to be in charge of things, and he's finding it equally difficult to help Sean grieving the loss of his mother and finding his stride in dealing with his powers as a succubus.

There were some humorous moments to lighten the mood, which is mostly somber throughout the book, which was to be expected after the events of book 4, as well as considering what we find out in this book.

At around 30% or so, I had an inkling on how this would unfold, after finding out who sent the troll that killed Sean's mother, and the three young wolves showed up in town.

The book is told entirely from Jesse's POV, and he's a somewhat unreliable narrator, as his perception of how people feel about him isn't entirely accurate, something that he's starting to learn. His guilt stemming from mistakes made in the past, and how they are affecting the present, is obviously not helping him see himself clearly, and he continues to feel as if he's not good enough and can never measure up.


I would have liked to find out more about what makes Sean ticks, but perhaps that's still to come. I wish Jesse could see himself as others do, and it seems that by the end of this book, he's starting to get there. Their relationship gets a chance to grow in this book also, as Sean towards the end forces some honest conversations with Jesse instead of both of them fumbling with what needs to be said.

As the focus of this book is mostly on the new wolves in town, and Jesse struggling with his guilt and his keeping secrets from Sean and others about the true reason for the troll attack, we don't see a whole lot of the townsfolk in this book, at least not as much as we did in previous ones. Of course, all the main players make an appearance, and everyone contributes to the plot unfolding, but this book felt to some extent as a transition, a bridge, a set up for the next one. It also felt shorter than the previous ones, but certainly covered what it needed to cover.

Of course, the writing is as awesome as always, engaging and entertaining, and I continue to be fascinated with this series. Fletcher's 2nd book is next, and if the first chapter is any indication, it'll be a wild ride. I can hardly wait!

Please note: These cannot be read as standalone books and must be read in order.


** I received a free copy of this book from Signal Boost promotions as part of this tour in exchange for an honest review. **