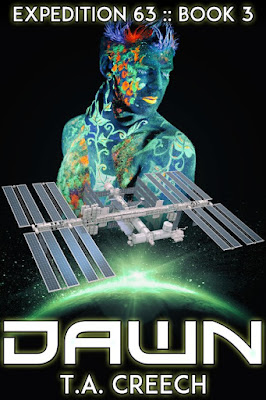 Yakecen Sinohui can see the end in sight for the stranded crew of the Station. Each breath is a countdown until they’re able to return to Earth, until the poison clouds have cleared enough to leave. Though it’s a bad idea, Yakecen is drawn into the orbit of their resident biologist, Eli, someone who has kept Yakecen’s head in the game with his sunny presence.

The universe, however, has one last middle finger to give the weary crew.

Eli Palamo doesn’t object to Yakecen’s covert attention. He’s pined for his friend from the first moment they met, and isolation has strengthened their bond as the hardships forced them lean on each other completely. Yakecen is all he’s ever wanted. Nothing will be enough to tear them apart, if Eli has anything to say about it, not even Yakecen’s own demons. Definitely not the end of their disastrous mission and their fight for survival.


I am a house-parent to a rambunctious small child and happily mated to an equally rambunctious military spouse. My adventures in writing began with fanfiction, and once I was hooked I never looked back.

While I've always tried to make my fanfiction unique, what I enjoy most about creating original work is the ability to delve into my stranger ideas without worrying about how I might apply them to someone else's world and characters. With my own creations, I take pride in twisting familiar tropes into something new and unexpected.

When I write, it is with the intention that my stories will leave a lasting impression. I hope you enjoy the characters and the worlds I create, and that they help you to find a place to exist, for a while, outside of your own.