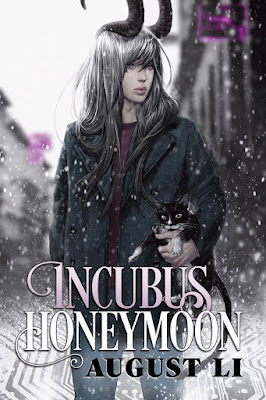 As the so-called magical creatures go, I’m low on the hierarchy, and my powers aren’t much good to human mages. I’m a lover, not a fighter, through and through. I’m also selfish, lazy, and easily bored. But I’m damned good at what I do.

Too bad that won’t get my arse out of this sling.

Do one—granted, uncharacteristic—good deed, and now I’m held hostage to an arrogant faerie prince, trying to track down the one who summoned him while dodging gangbangers, gun runners, and Nazis. Add the powerful mage guilds scrambling to gather firepower for some doomsday event they’re sure is around the corner, and my cushy life of leisure might be nothing but a memory. On top of that, something’s compelling me to change on my most fundamental level. I’m not sure what I’ve got myself mixed up in, but nothing will ever be the same.

When I was at school for creative writing, my professor introduced us to a game called Smoke as a way to get at the essence of our characters. The object was to ask someone a series of questions and, based on their answers, try to guess the well-know person they had in mind. The questions were things like “What animal are you” or “What city are you?” Not what city you like, where you live, or even where you grew up, but at your heart, what city are you? If you take a moment and try to answer it about yourself, you’ll find it’s fairly difficult, and it’s also abstract if done right. When you hit on the perfect answer, it’s undeniably right, though often with no way to articulate why it’s right. You can’t try to think of logical reasons or list comparable traits. It’s all intuition.

Sometimes it’s best to go with the first thing that comes to mind. But later, as you reflect on your choice, you begin to uncover facets of your character you weren’t aware of. You realize that while Rio is all sex and sunshine and idle pleasure on the surface, it has a tumultuous history. It’s new in the grand scheme of things. It’s still defining itself, and it’s trying to reconcile its vast diversity of cultures, some of which have been lost and will never be recovered in the name of progress. It has a shiny surface with deep waters beneath. It’s both welcoming and indifferent, celebratory and tragic—as all cities are, but that’s what makes this game fun. It’s celebratory and tragic in its singular way, like a person, because of the precise combination of innumerable factors. I could go on, but you’re probably beginning to see how all these revelations can teach an author about their character. Consider all the implications and hidden meaning in pruning shears. They’re domestic. They cut living things…. The fact they’re kept in a shed could even have significance. Why not a machete? What clues does that give?

It’s all a way to get at the treasure in your subconscious and bring that to the page for the characters and the readers.

My professor’s favorite example was that Audrey Hepburn is Paris. Why? What about Paris? They share a spirit, an essence. That’s why it’s called Smoke; it’s ephemeral.

So after writing many posts and out of a desire to do something interesting here, I thought I’d play with my characters a little. Even after spending literally years with them, it was still challenging and enlightening (though some I knew instantly). See if you get a sense of these people without the details of their ages, occupations, histories, talents, preferences, or fears.

Name of a boat?
Inky: Joie de Vivre
Emrys: Calypso
Dante: Ever On
Jet: Luck Be A Lady
Blossom: Twilight Caressed Her Melancholy
Raf: A Light in August

Want to know more about these people?

August Li plays every game as a mage. He thinks the closest thing to magic outside of games and fantasy is to bring things into existence from nothing, which he does in words and images. As a proud trans man, he hopes to bring diversity and representation to all those who want to see themselves in the art and stories they enjoy. He’s a perfectionist, travel enthusiast, and caffeine addict.

Gus makes his home on the coast of South Carolina, where he spends his days in search of merpeople, friendly cats, and interesting pieces of driftwood. He collects ball-jointed dolls, tattoos, and languages. He believes in faeries and thinks they’re terrifying… but still wants to meet one.