Hi! Kim Fielding here, and I’m so excited to share my newest release—my 21st novel!—with you. Blyd and Pearce is a fusion of some of my favorite genres: m/m romance, medieval fantasy, and noir private eye. I hope you enjoy reading it as much as I enjoyed writing it.

Today I’d like to talk about my favorite films noirs. If you’re unfamiliar with the genre, you can start with the Wikipedia entry to get a sense of what it is. Film noir perhaps reached its peak in the 1940s and 50s, but some wonderful movies are still being made.

Here are a few of my favorites in the genre:

—Almost anything with Humphrey Bogart. Probably the most notable are The Big Sleep and The Maltese Falcon, but I’d argue that Casablanca edges in on noir too. Bogart’s characters are quintessential noir heroes: smart, cynical, tough.

—The Night of the Hunter. I guess you could argue whether this is noir or gothic, but either way, you should see it. Robert Mitchum plays a supremely creepy villain, and the almost surrealistic cinematography is stunning.

—Vertigo. I’ve seen people argue that this isn’t really noir, in part because it’s shot in color, yet it follows many of the classic tropes. Besides, it’s Hitchcock and it stars Jimmy Stewart. If you haven’t seen it, you should.

—Fargo. I think this film has some lovely shots, and the characters are darkly quirky and wonderful. Perfect dialogue too.

—LA Confidential. A more contemporary film that manages to capture the feel of 1950s Los Angeles, where it’s set. I really love all the characters in this movie, plus the strong sense of moral ambiguity.

—Blade Runner. Yes, it’s science fiction, but it’s also undeniably noir, and it’s one of my all-time favorite films. The newer sequel, Blade Runner 2049, isn’t as good as the original but didn’t disappoint me, and it still does a good job with noir traditions.

—Dark City. Another speculative fiction/noir, this one with Rufus Sewell, who’s accused of murder and can’t remember if he did it.

—Brazil. Is this one really noir? Maybe. In any case, its tale of dystopian bureaucracy strikes similar cords, and I think it’s underappreciated.

—Diabolique. I still remember watching this one in my high school French class. Again, I guess you could argue about whether it’s noir or suspense, but why bother when you could be enjoying Simone Signoret’s femme fatale character instead? 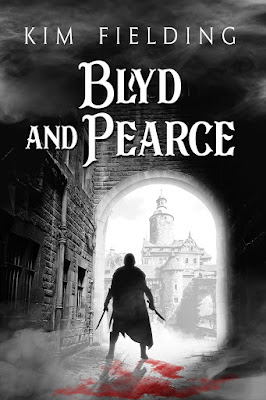 Born into poverty and orphaned young, Daveth Blyd had one chance for success when his fighting prowess earned him a place in the Tangye city guard—a place he lost to false accusations of theft. Now he scrapes out a living searching for wayward spouses and missing children. When a nobleman offers him a small fortune to find an entertainer who’s stolen a ring, Daveth takes the case.

The narrow stairway rose steeply, each step creaking under our feet and taking us into increasing darkness. I smelled onions and fish—a bit strong, but better than my apartment’s odors—and blindly held on to the banister. It occurred to me that Pearce was in a good position to attack me, since I’d have trouble defending myself in the blackness of unfamiliar territory. But I wasn’t afraid of him. Maybe some of his enchantment lingered.
We climbed four flights to the top floor, where he unlocked another door. A few scattered spiritlights flared to life at once, but he lit two lanterns as well.
It wasn’t a large apartment, and the roof angled steeply on both sides so that he had to stoop a little when he hung his lute and midnight-colored cloak on a hook. Bright fabrics adorned the walls—silks and embroidered cottons—and a thick mat and pile of pillows were heaped in one corner. Rag rugs and pillows for seating covered the wide floorboards. The apartment held little else other than a dry sink, a few shelves, a little stand with a chamber pot, a painted wardrobe. But it was a cozy space, and two pottery vases of flowers squatted on the windowsill.
“Do you want some wine?” he asked.
It wasn’t what I expected, so I didn’t answer at once. “Uh, yes. Sure.”
He took a green glass bottle from the shelf, pulled the cork, and poured a red liquid into a pair of plain clay cups.
He was no longer wearing the gauzy silks he’d performed in, but his current outfit was hardly understated. Embroidered snakes—matching the bright blue of his chausses—trimmed a sunshine-hued tunic, and instead of sensible boots, he wore scarlet stockings and yellow slippers with curled, pointed toes. On another man, the clothing would have been gaudy, but it suited him well.
I remained near the closed door. With a tiny quirk to his lips, he prowled closer. He held out one cup of wine, which I took, and when I hesitated to drink, he took a dainty sip of his own. “It’s mediocre, I’m afraid.”
Not being able to distinguish good wine from bad, I swallowed a mouthful. It tasted fine to me.
“What shall I call you?” he purred, standing quite close. He was older than I’d thought, but the fine lines at the corners of his eyes didn’t make him any less beautiful.
“Daveth Blyd.”
“It’s a pleasure, Citizen Blyd.”
“I’m not a citizen.”
He tilted his head. “Oh?”


He wore a scent—something spicy and warm—that made my head swim. And his voice….
When I was newly signed on as a city guard, my duties had included carting my captain’s soiled uniforms to the laundry. It wasn’t one of my favored tasks. But she’d been a showy woman and had her capes trimmed not with dyed wool but with velvet. I’d rarely felt anything so soft, and I used to give the velvet surreptitious little pets as I carried her clothes.
Jory Pearce’s voice was like that velvet: soft and rich and plush. And, I reminded myself, expensive.