Callie, a Classics major, flees home to protect her family from a monster straight out of mythology.  Visions lead her to Nectar and Ambrosia: the weirdest pub on Earth, where inter-dimensional travelers with attention seeking issues get drunk in between the A-list celebrity lives they create. They can't pretend to be gods anymore—not since a treaty with the current Supreme Deity promising they won't intervene in human affairs.

The Doorkeeper of this threshold, Florian, rides herd on the rowdy Amaranthine and offers her shelter and a job. Callie likes the lonely, mysterious bartender more than she should. For Florian, her presence is a ray of light in the gray monotony of his sentence behind the bar, but he keeps a cautious distance—the truth of how he became Doorkeeper could change Callie's perception of him forever.

When angels show up for a war council over Zeus's irrational mutters about a comeback, Callie has uncontrolled visions of an apocalypse.  Ex-gods realize she’s the first Oracle Priestess in generations. All Callie wanted was keep her parents safe, and now it seems she must sacrifice her future to keep the rest of humanity safe, too. Ambrosia could be the key to harnessing her visions— or it could cost her life.

War is coming. The threshold between worlds has never been more fragile. Callie must discover who is pulling Zeus's strings and avert the final battle—before the immortal vying to become the next Supreme Deity kills her first.​

"Maybe Florian should sell popcorn. It might make this more interesting."
Callie jumped. A smiling Puck stood at her elbow. She took a step sideways to increase the distance between them. The hair on her arms prickled, like she stood next to a live wire.
"Do you think it's enough to make people believe again?" He leaned against one of the empty tables casually, head cocked as he waited for her to respond.
"The show is satirical enough that maybe no one will take it seriously," Callie admitted, rubbing her goose bumps. She took another step away with the pretense of getting a better look at the screen. "Having famous celebrities screams Hollywood production."
"Hmmm. You're right." Puck frowned and crossed his own arms. "I didn't think about it that way. But like the almighty Zeus said, we're not talking about belief, are we? The real issue here is intent: Zeus's intent to violate the contract against divine intervention and material apparition. Do you think this is enough to cross the line?"
"I hope not. But I'm afraid so."
"Why afraid, love? What's so terrible?"


Callie stared at him, aghast. "You know Ares and Michael are going to war over this, right?"
Puck gestured dismissively. "They used to fight all the time, back in the beginning. Back about the time they wiped out the dinosaurs."
"They killed the dinosaurs?" Dizzy, Callie wondered if there was more than one of the 'last' times that Hermes let slip.
"When they opened the first threshold between dimensions. That was unfortunate. I liked those big ones with the little arms and the giant teeth." He tucked his hands in at chest level, clawed playfully, and roared with a grin. Puck shook his head in regret. "Then the other bunch came. When they tried to open a threshold in Mesopotamia it caused the big flood. Clumsy bastards."
Callie shivered as an echo of the tsunami vision she and Bridget shared returned unbidden to her thoughts. Puck continued, "That one took out the breeding grounds for my favorite creatures. No more unicorns, no more dragons or griffins. A shame. I loved those, so bloodthirsty and fierce! I managed to save a few and relocate them, but not enough to last forever."
Something was happening on the news channel, the anchor speaking in urgent tones. Callie couldn't tell what they were saying. The Amaranthine, already bored with Zeus's reality show, drifted back into the booths and the gaming area.
"Now that you know they exist, how do you feel about asking for intervention?" Puck examined his black-polished nails.
"I don't know." Callie hazarded, distracted by the screens. "I've never been much of a believer in anything religious. I loved the stories, the art, and the poetry for what they were, more than believing the gods were real."
"And now that you've met them?"
"I can't imagine asking any of them for anything," Callie admitted.
"Good, because they're not really gods, you know. They're a bunch of idiot scientists who came to this planet looking for energy, stumbled into our paradise and never fucking left." His sharp features took on a fiercely indignant expression as he spoke, his eyes on Zeus's nattering figure projected on the big screen. "Word got out. Others followed, stomping all over the place. Then they started competing for the attention of you lot. It used to take something small like a volcano or an earthquake, but now it takes computers and text messages and cat memes. Things are too fucking complicated."
She wanted to listen, realizing this was important, but the silent cacophony of her early warning system made it impossible to concentrate.
"It's a rare beast, a practical romantic like you, Callie. But you're something even rarer than that, I think."
"What's that?" she asked automatically.


"I'm not sure yet. But I'm going to find out." His voice, soft and thoughtful, held the edge of something sinister. 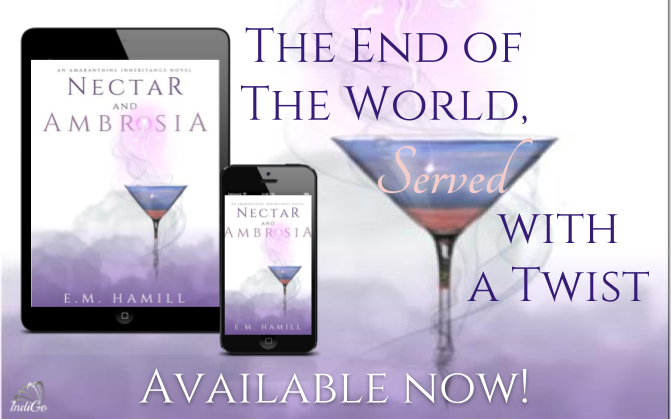 Elisabeth "E.M." Hamill is a nurse by day, unabashed geek, chocoholic, sci fi and fantasy novelist by nights, weekends, and wherever she can steal quality time with her laptop. She lives with her family, a dog, and a cat in the wilds of eastern suburban Kansas, where they fend off flying monkey attacks and prep for the zombie apocalypse.​