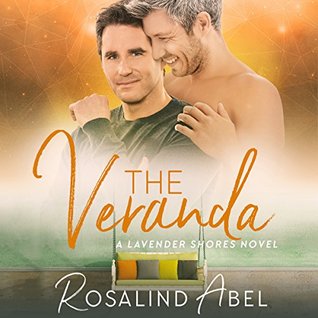 
Donovan Carlisle helps countless people in Lavender Shores with his skills as a therapist. It seems, however, that his ability to enable others to live their happiest life only works outside of himself. Donovan truly loves his life but isn’t able to find a relationship that satisfies his heart’s craving. Maybe the problem is that the only man he wants is off-limits.

Spencer Epstein came to Lavender Shores to find himself. Instead, he married one of the local town beauties. He’d thought his prayers had finally been answered. Then he met his pregnant fiancée’s brother. It turned out those answered prayers were just cruel twists of fate.

A decade later, after a divorce and the crumbling of all Spencer thought was set in stone, he sees his brother-in-law at a masquerade sex party. He takes full advantage of the anonymity and acts on the desires he’s held at bay all those years.

The problem is those silent and frenzied moments didn’t satiate anything. The fire and heat between the two men only grows as secrets are uncovered, and they must determine if the cost of their passion is too high....

I was honestly enjoying the hell outta' this one...and then...

well, then came the ending but we'll get to that; for now let's talk about what I liked...which quite honestly was most of this book.

'The Veranda' is the third book in Rosalind Abel's 'Lavender Shores' series and the third one that I've listened to on audio. Once again Kirt Graves is the narrator for this series and once again he's done a rock solid job of narrating this book. This is my 6th book narrated by Kirt Graves and I've absolutely enjoyed them all. From the Lavender Shores books  to Wolfsong and everything in between the narration of each one of these books has without fail done justice to the story and with this most recent installment to the Lavender Shores series I've been reminded of the fact that I have yet another narrator whose backlist I need to investigate further. So from an audio perspective this one's definitely recommended.

Now on to the story. We've met Donovan in previous stories and I really liked him so when I saw that he was one of the MCs in this book I was more than happy to check it out. I have to admit though if Spencer has shown up previously he's not as solid of a memory in my mind but maybe that's because he was probably over shadowed by his less than likable sister...seriously can that woman just die without a fuss.

She was without a doubt a manipulative, conniving, self-serving b!tch! Couldn't stand her and from start to finish but given that we got to see her in action in previous stories this did not surprise me and quite honestly my less than warm fuzzy feelings towards here made it a whole like easier to get past that fact that Donovan's love interest is her ex-husband...yeah, that may have made me a bit squimish...but, hey, it's just a siblings thing. You date my brother or sister and for me that just automatically takes you off of my 'things I'd like to do' list.

While Donovan and Spencer may have seemed like 'insta-love' they weren't this was more a case of unrequited love come to fruition and there was just so much about these two was was sweet and adorable. For the most part I loved their story, how things progressed and how these two were together. While everyone may not be on board with Donovan and Spencer's relationship I love that they are. They each know what they want and what they want is each other and when push comes to shove both men are willing to speak up for what they want and yet in spit of that they're smart enough to not push things.


Along with Donovan and Spencer it was to say the least delightful to catch up with the MCs from previous books as well as some other secondary characters...such as Robert Kelly...that man is cray, cray in the most adorable way, Lamont...who can we please have his story

Ok so overall as you can see I enjoyed this story and now without benefit of specific details I'm going to explain how 'The Veranda' went from 4 stars to 3 for me and I really, really want you to keep in mind this is a 100% subjective opinion here. Yes, i have some friends who share my thoughts on this but I also have friends who either didn't care or really liked what happened...and yes, I'm talking about the ending now. I'm not going to go into the details here because if you've read the book whether you liked it or not I'm sure you know what I'm talking about and if you haven't but you plan on it than I'm not going to be the one to spoil it for you but for me it was just too much.

I can do OTT, I really can...there are more than a couple of authors that I read who have done their share of over the top and I've loved it, but, in the case of this story for me it was just too much and it just didn't work...it really did spoil things for me.

So at the end of it all I was frustrated and I'm taking a star back because of that, but as I said it's a very subjective rating that we're dealing with here because honestly if that ending had been just a tiny bit different there'd be 4 stars or 3.5 at the very least on this one and I'm still waiting for Lamont's story which I know from the e-books is the next one on the list...so I'ma just gonna' wander of and read a few books to pass the time while I patiently wait.

An audio book of 'The Veranda' was graciously provided by the author in exchange for an honest review.