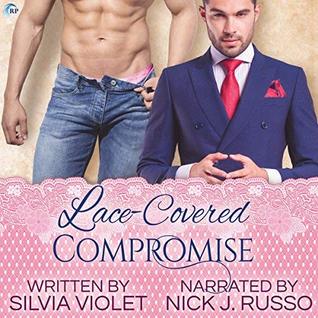 
Adam Kingston expects to inherit his father’s multinational conglomerate. When he finds out half of it went to Nate Thomas—an annoying man whose dreams for Kingston Corp.’s future clash with Adam’s need to stave off financial disaster—Adam is furious. He’s willing to do whatever it takes to wrest control of Kingston Corp. from Nate.

Nate may be soft-spoken, but he refuses to be swayed by Adam’s arrogant demands. When Nate accidentally drops a pair of his lacy panties in front of Adam, there’s no mistaking Adam’s interest. Nate hadn’t realized Adam was bisexual, but now that his secret is out, Nate is willing to use Adam’s lust against him if it means protecting the welfare of the company he loves.

For Adam and Nate, hatred and desire are closely linked. Their inability to compromise threatens the company and could expose their tightly held secrets. But as they work together to develop a plan to save Kingston Corp., they begin to realize there might be more to their relationship than anger and lust.

Nothing says "secure in my masculinity" like a pair of manties...

I'm serious here. I have no issue with a guy wanting to wear a skirt, a ruffly blouse or silky, lacy panties after all women have been stealing men's fashions literally for decades. Pants originally made for men, high heels...you guessed it men and can I just add here when it comes to the  heels I would gladly let them keep them...anyways, my point is there are manties in this story and me likey the young man who wears them. He's confident and self assured and as it turns out his adversary, one Adam Kingston, discovers that he likes them as well.

'Lace-Covered Compromise' is a relatively short, sexy enemies to lovers story about two men doing battle for control of a company and discovering that whether it's business or pleasure everything works better when people are willing to compromise.  Things were hot between Adam and Nate...I mean seriously hot and truthfully I enjoyed the romance part of this story and the conflict between Adam and Nate added some definite tension for these two men and while I appreciated the how comes and whys of said tension at times it just felt like too much.

I liked Adam in all of his screwed up glory and his friend Valerie who fate had assigned the arduous task of keeping Adam from running too far off of the rails. I enjoyed Adam's moments of self actualization when he was able to see that who he was wasn't who he wanted to be and that maybe...just maybe Nate wasn't the enemy.


Nate was a really good match for Adam and while he wasn't a steamroller he very solidly held his own and it never felt like he was trying to railroad Adam but often times his patience showed in how he may have walked away from Adam when things got to explosive (and not in a good way) but once cooler heads could prevail, he came back and was willing to try again. In hindsight I came to realize that while there was a lot of very hot and steamy sex going one, there was also a lot of relationship development happening outside of the bedroom too.

I have to admit this one got rounded up because of the narrator...who was none other than Nick J. Russo an absolute favorite of mine. Once again this narrator is one who I just need to see his name on the audio book and I'm know that my only concern is going to be how much I'll like the actual story because the narration without a doubt will be awesome and once again my faith was not misplaced.

'Lace-Covered Compromise' is another one of those books that for me was a hot and steamy romance perfect for enjoying on a hot steamy summer's afternoon...sitting on your patio or balcony or backyard with a nice cool tropical drink in hand...hey, maybe I should have a do-over on this one.

An audio book of 'Lace-Covered Compromise' was graciously provided by the publisher in exchange for an honest review.