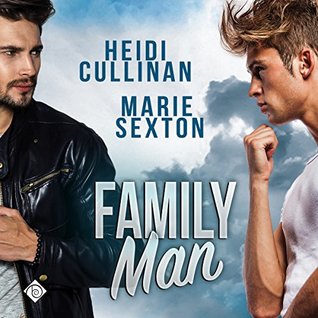 At 40, Vincent "Vinnie" Fierro is still afraid to admit he might be gay - even to himself. It'll be a problem for his big, fat Italian family. Still, after three failed marriages, it's getting harder to ignore what he really wants.

Vinnie attempts some self-exploration in Chicago's Boystown bars, far from anyone who knows him. Naturally, he runs smack into someone from the neighborhood.

Between working two jobs, going to school, taking care of his grandmother, and dealing with his mother's ongoing substance abuse, Trey Giles has little time for fun, let alone dating someone who swears he's straight. Yet after one night of dancing cheek-to-cheek, Trey agrees to let Vinnie court him and see if he truly belongs on this side of the fence - though Trey intends to keep his virginity intact.

It seems like a solid plan, but nothing is simple when family is involved. When Vinnie's family finds out about their relationship, the situation is sticky enough, but when Trey's mother goes critical, Vinnie and Trey must decide whose happiness is most important - their families' or their own.

the choice isn't always ours.I think we can all agree that in general stereo-types suck and while some are worse than others in terms of their implications, some can also have a basis in reality...like the fact that some cultures place a great deal of importance on things like family, which isn't to say that they're the only cultures that value family and honestly, try as I might I can't see this as a bad thing. But as much as a person can love their family sometimes, that same family can have expectations that aren't fair or may even have just been misinterpreted...hey, it could happen.

For Vincent Fierro family means everything and as an Italian man, he's sure that being gay isn't an expectation his family would have and certainly not something that they would accept from him but after 40 years and 3 divorces Vincent is starting to realize that he needs to find a way to live his life for himself and hopefully...maybe if the stars aligned he'll still get to keep his family.

Trey on the other hand doesn't have a lot of family and maybe that's a good thing because all he's got is his gran and his mom...and mom...to say the least is sucking the life from him. Mom's got an addiction issue and we'll talk more about that later.

'Family Man' isn't a new story by any means it was released in e-book format back in 2013 and it's been on and off of my radar on a somewhat consistent basis every since but when I saw that it was out on audio I decided that this was a sign that it was time for me to check this one out.


Colin Darcy is the narrator and this was my first time listening to a book narrated by him and not my last. Mr. Darcy impressed the hell out of me. Overall I enjoyed his narration but I have to admit I quickly became a fan of Vince's voice. It was so perfectly the voice that I imagined Vince would have and I was simply delighted with Vince and while I hadn't really given as much consideration to Trey's voice once again things worked and in general the same can be said for the secondary character voices as well. It all just worked.

Ok, so without spoiling this for those of you who haven't read or listened to the audio on this one...overall I liked this story. I liked the way that Vince grew and developed as the story progressed seeing him come to terms with his sexuality and while it was a struggle for him at times and he didn't always do the right thing at first he still kept trying and it never felt like he was giving up on himself or on being with Trey in spite of what he thought he was risking and I loved that when Trey needed him the most he was there for him and while their relationship was definitely a work in progress neither of these men were afraid of a little hard work if it meant having what they wanted.

Now I can't say this was the part of the story that I liked the best because that's not the case but I had a definite appreciation for how the author's dealt with Trey's mom's addiction issue. It wasn't glorified in that she magically got better and everyone thought she was wonderful for it and all of the damage that she caused with her addiction suddenly disappeared or was forgotten and without giving away specifics of the story I'm not going to go into this any deeper except to say that as someone who has had the experience of being involved with a person who had addiction issues as with most things in this world each person, each disease, every issue is unique and while there may be commonalities there are also things unique to that person and their situation and while I saw the commonalities in Trey's mom to the situation that I was in I also saw the things that were different and unique to this characters story and for me that was a a touch of realism that came naturally to the story.

Ironically as much as I enjoyed this story I can't say that I"m sorry it took me so long to get around to this one because I thoroughly enjoyed Colin Darcy's narration and again...the voice of Vincent...it was so worth waiting for, but even if you're not a fan of audio...hey, it can happen the story is a worthwhile reading experience.

An audio book of 'Family Man' was graciously provided by the publisher in exchange for an honest review.

Buylinks are provided as a courtesy and do not constitute an affiliation with or endorsement of this book, author or booksellers listed.