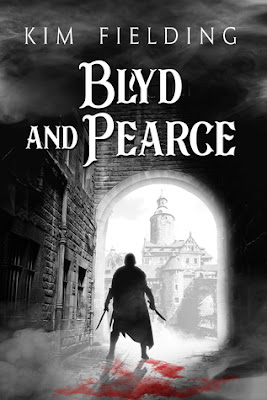 
Born into poverty and orphaned young, Daveth Blyd had one chance for success when his fighting prowess earned him a place in the Tangye city guard—a place he lost to false accusations of theft. Now he scrapes out a living searching for wayward spouses and missing children. When a nobleman offers him a small fortune to find an entertainer who’s stolen a ring, Daveth takes the case.

Kim Fielding is a strong writer with a flair for world building. Without telling us much, she shows us Tangye: the dark political underbelly, the wealthy ruling the poor, a prince hiding in his castle, the stench of the barracks, bloated bodies floating ashore, orphaned children willing to do anything for a coin.

Tangye is a dangerous city, a city that shows no mercy. Daveth knows it well. He was born and raised in the Low, clawing his way to a favored position in the royal guard only to lose it. Daveth find things and people for a living. He trusts no one.

When Daveth is hired to find a beautiful entertainer and whore named Jory Pearce who supposedly stole an heirloom ring from a very rich man, he has no idea what he's getting into. Jory is no thief, but he's hiding something.

Told entirely from Daveth's first-person POV, Blyd and Pearce is first and foremost a novel of crime and suspense; it is not a romance in the traditional sense. The novel has a distinct medieval noir feel with an added element of magic (there are wizards and spells).

The plot weaves in and out as we navigate the city with Jory and Daveth, because Daveth can't let Jory go to a certain death. Jory doesn't share much of himself and while the men become lovers, the romance plays second fiddle to the mystery. Indeed, as the men's pasts and presents collide, it becomes obvious the missing ring is but one piece in an intricate puzzle of intrigue, betrayal, and revenge.

There's some steam, moments of love and possession, but the ending, in true noir fashion, leaves us with more questions than answers. The men are together, but the future is uncertain.

My rating reflects my subjective preference for sweet romance, which this book certainly isn't. I can't fault the writing or character development, but I didn't feel connected to the MCs or their relationship. Fans of mystery novels are sure to enjoy this one more than I did.