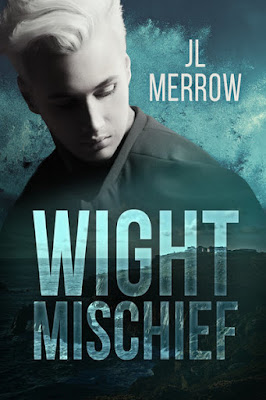 A ghost of a chance at love.

Personal trainer Will Golding has been looking forward to a getaway with his best friend, Baz, a journalist researching a book on ghosts. But on the first day of their camping trip on the Isle of Wight, Will takes a walk on a secluded beach and spies a beautiful young man skinny-dipping by moonlight. Ethereally pale, he’s too perfect to be real—or is he?

Lonely author Marcus Devereux is just as entranced by the tall athlete he encounters on the beach, but he’s spent the years since his parents’ violent death building a wall around his heart, and the thought of letting Will scale it is terrifying. Marcus’s albinism gives him his otherworldly appearance and leaves him reluctant to go out in daylight, his reclusiveness encouraged by his guardian—who warns him to stay away from Will and Baz.

The attraction between Will and Marcus can’t be denied—but neither can the danger of the secrets haunting Marcus’s past, as one “accident” after another strikes Will and Baz. If they don’t watch their step, they could end up added to the island’s ghostly population.


Wight Mischief was previously published by Samhain, but has been completely re-edited and given a lovely new cover for this second edition by Dreamspinner Press.

Hi, I’m JL Merrow, and I’m delighted to be here today as part of the blog tour to celebrate the release of Wight Mischief, a romantic suspense novel set on the island I grew up on, the Isle of Wight.

I’d like to share an exclusive excerpt from Wight Mischief with you today. Here, Will finally gets to meet Marcus’s guardian:


Bloody hell. Marcus had jumped a mile. Will spun. Half expecting to see the tunnel ghost had come in to ask for a light, he found himself instead looking into the cold gray eyes of a middle-aged man in a business suit.
The bloke was… powerful, Will thought. Not just in a physical sense, though he was tall and broad-shouldered with a square jaw that suggested he wouldn’t go down easily in a fight. No, it was more an air he had about him. Like he was used to people treating him as important. He reminded Will a bit of some of his clients’ husbands—big shots in the City, used to dealing with sums of money that probably made even Marcus’s annual income look like small change.
And he had a key to Marcus’s house. Which meant, Will reckoned, this must be Marcus’s guardian. Bloody hell, Hugh from Yarr Manor hadn’t been wrong about the “stern” thing. Of course, Mrs. Armitage from the school had said pretty much the same thing, hadn’t she?
“I’m waiting, Marcus,” the man said.
Marcus seemed a bit thrown. “Leif! I wasn’t—this is Will.” He flushed.
Why would he be embarrassed? Was he not out to Leif or something? Will got up and held out his hand, trying to be polite. “Nice to meet you—you must be Marcus’s, uh, guardian?” It felt weird, calling him that, when Marcus was so clearly grown up now, but what else could Will call him?
The man ignored his outstretched hand. It looked like this was where Marcus had learned that little trick. “Who are you? Are you the journalist?” The way he said it, it might just as well have been cockroach.
Will took a deep breath. “I’m not a journalist. I’m a personal trainer. My friend is a journalist, but he’s here to write a book.”
“And to dig around Marcus’s past, it seems. I’m afraid I don’t find your protestations of personal innocence at all convincing. Marcus, I’m disappointed in you. I thought I had taught you better than this.” His tone was soft. Maybe Will was just imagining the menace.
“No, you’re wrong about Will—”
“Marcus.” Leif’s voice didn’t rise, but Marcus still shut up a lot more readily than Will liked.
No, not creepy at all, Will thought sarcastically. He and Leif were pretty much of a height, but he wouldn’t like to bet on who’d win if it came to a fight. Leif, most likely, he decided with regret. Leif probably knew all the dirty tricks in the book.
“I just came to check on Marcus’s ankle,” he said. “He turned it last night on the beach. I strapped it up, but he hasn’t seen a doctor. I think he’ll be okay, but you might want to keep an eye on it.”
“I will do. You needn’t bother coming up here anymore.”
Will struggled to keep his temper. “I think that’s up to Marcus, actually.”
Leif smiled. “Agreed. I suggest you wait until Marcus invites you. In fact, I insist upon it. I should hate to have to involve the police, should your attentions prove… bothersome.”
Bugger. “Right. Fine. Marcus….” Will hesitated. Marcus had such a weird look on his face, and he suddenly seemed so much younger. “You’ll call me, right? I mean, you’ve still got Baz’s number—wait a minute, I’ll give you mine.” He looked around wildly for a scrap of paper.
“Just tell me it,” Marcus said, grabbing his laptop. “I’ll put it in here.”
“Right.” Will rattled off the number, hoping he’d got it right. Leif’s hostile stare was unnerving. “I’ll see myself out, shall I?”

Leif smiled. It made him look vaguely like a well-dressed hyena. “I’ll accompany you.”
Will felt a strong urge to steal something on the way out, just to live down to Leif’s expectations. He managed to rein it in; it’d make Leif’s day if Will gave the bloke a reason to call the police.
“A word, please,” Leif said coldly as he closed the front door behind them both, clearly intending to see Will right off the premises. A large black Mercedes stood in front of the door like a mechanical rottweiler. With Leif behind the wheel, it’d probably bite. “Marcus may be of age now, but I still see him very much as my charge. I should hate to think I was failing in my duty to his late parents. Any further attempts at harassment will be dealt with severely, do I make myself clear?”
“Oh, for God’s sake!” Will seemed to have zero hold on his temper today. “Before you go making threats, why don’t you ask Marcus if he thinks I’ve been harassing him?”
“Don’t worry,” Leif said, and there was a smile on his face Will didn’t like one bit. “He will do. No—not the tunnel. I think you should get into the habit of using the front entrance. It’s much more civilized, that way.”
What are you, the bloody thought police? Will felt like asking. Clenching his jaw, he walked down the drive and over the bridge. As he went over it, he turned back. Shadowed by the doorway, Leif stood watching him. The security gates opened as he approached them and shut behind him as he walked down to the road. He looked back once more, but the house, and Marcus’s guardian, were no longer visible.

JL Merrow is that rare beast, an English person who refuses to drink tea.  She read Natural Sciences at Cambridge, where she learned many things, chief amongst which was that she never wanted to see the inside of a lab ever again.
She writes (mostly) contemporary gay romance and mysteries, and is frequently accused of humour.  Two of her novels have won Rainbow Awards for Romantic Comedy (Slam!, 2013 and Spun!, 2017) and several of her books have been EPIC Awards finalists, including Muscling Through, Relief Valve (the Plumber’s Mate Mysteries) and To Love a Traitor.
JL Merrow is a member of the Romantic Novelists’ Association, International Thriller Writers, Verulam Writers and the UK GLBTQ Fiction Meet organising team.

JL Merrow is offering a prize of a $10 Dreamspinner Press gift certificate to one lucky commenter on the tour, who will be randomly chosen on Friday 15th June. Good luck!