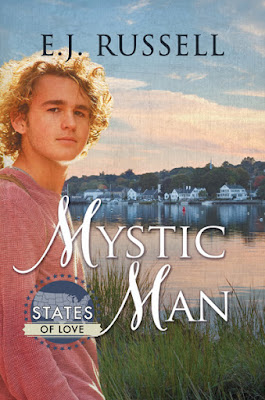 When a series of personal crises prompt risk-averse research librarian Aaron Templeton to apply for a job on the other side of the country, nobody is more surprised than he is. He nearly runs home before the final interview except for one little problem: he has no home anymore. He put his condo on the market before he left California and it’s already sold. Only an encounter with free-spirited Connecticut native Cody Brown at the Mystic Seaport Museum staves off Aaron’s incipient panic attack.

Cody loves nothing better than introducing newcomers to the great features of his beloved home state, and when the newbie in question is a rumpled professorial type with the saddest blue eyes on the planet? Score! The attraction between the two men deepens as they explore Cody’s favorite spots, but when difficulties arise and Aaron’s insecurities threaten to overwhelm him, will Cody’s love be enough to keep him in Mystic?

Many thanks to My Fiction Nook for inviting me to stop by today as part of the Mystic Man blog tour! Mystic Man is a contemporary novella set in Connecticut, part of Dreamspinner’s States of Love collection. To celebrate the release, at the end of the tour I’ll be giving away a $20 Amazon gift card and an ebook copy of Clickbait (another of my contemporary romantic comedies) to one lucky commenter.

Mystic Man is actually the first book I’ve written that includes a child as a character with significant page time. In For a Good Time, Call… I wrote a one-eyed, Frisbee-playing dog. In Wolf’s Clothing, I wrote a reluctant werewolf. In Nudging Fate, I wrote a wyvern who’s really a transformed minstrel. But until Mystic Man, I’d never written a child.

Considering I’ve got three kids of my own, this seems a little odd, even to me. I mean, I don’t have a kid anywhere even as a cameo. Of course, my children are all adults now—in fact, my daughter turns twenty-nine in less than two months and my sons turn twenty-six three weeks after that.

But when they were little, they definitely left their marks on my life! My daughter was an in vitro baby back in the days when it was still a fairly infrequent process. There was a high likelihood of a multiple birth, and when we arrived at the doctor’s office to have the ultrasound to confirm the pregnancy, the nurse shook her finger at us. “You behave. The two couples before you are both having triplets!”

We behaved. Or rather our Lovely Daughter did.

Since we’d gone through the infertility treatment for her, we certainly weren’t expecting another pregnancy, but when LD was two and a half, it happened. I had had the pregnancy test, but not the ultrasound when we told LD were were having another baby.

We said no, it was only one.

Silly us, my Curmudgeonly Husband and I laughed at her, but when I went in for the ultrasound, the U/S tech said, “You have movement and heartbeat…in both.”

When I told CH, “LD was right,” he turned around and leaned his forehead against the wall.

We found out fairly early that we were having boys—I didn’t feel up to any more surprises—but LD kept trying to negotiate for a sister. “Please? Just one girl?”

I had to tell her it was a done deal.

She came to terms with it (more or less), generally ruling her twin brothers with the kind of steely, no-nonsense resolve that I gave Kaya in Mystic Man. When LD was about six and the boys were three, she became fascinated with a scrapbook of cartoons I’d cut out of magazines when I was about her age. CH impressed upon her that it was fragile and she had to treat it gently. He overheard her, sitting on the couch with a brother on either side, the scrapbook open in her lap.

“You have to be very, very careful with this,” she said, “because it’s thousands and thousands of years old. From when Mommy was little.”

Come to think of it, maybe that’s why I haven’t written a child before.

E.J. Russell–grace, mother of three, recovering actor–writes romance in a rainbow of flavors. Count on high snark, low angst and happy endings. Reality? Eh, not so much. She’s married to Curmudgeonly Husband, a man who cares even less about sports than she does. Luckily, C.H. also loves to cook, or all three of their children (Lovely Daughter and Darling Sons A and B) would have survived on nothing but Cheerios, beef jerky, and Satsuma mandarins (the extent of E.J.’s culinary skill set). E.J. lives in rural Oregon, enjoys visits from her wonderful adult children, and indulges in good books, red wine, and the occasional hyperbole.


Don't forget to leave a comment to enter the tour-wide giveaway. Good luck!