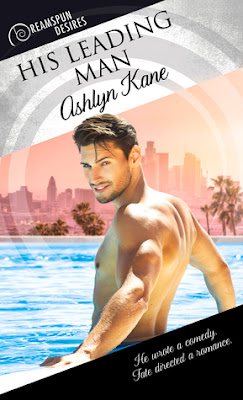 Drew Beaumont is bored of the same old roles: action hero, supervillain, romantic lead. He’s not going to let a fresh gay buddy comedy languish just because they can’t find him the right costar. No, Drew bats his eyelashes and convinces everyone that the movie’s writer should play Drew’s not-so-straight man.

Aspiring writer Steve Sopol has never had a screenplay optioned. Now one of Hollywood’s hottest properties wants to be in a movie Steve hasn’t finished writing—and he wants Steve as his costar. Turns out the chemistry between them is undeniable—on and offscreen.

When All Else Fails, Make Stuff

Like most people, I have my good days and bad days. And sometimes, especially when it comes to writing, I have bad weeks and bad months. Life happens. I need to be in the right frame of mind to write. And because I find the act of creating very rewarding—sort of self-sustaining really—it can be really tough to get out of a rut when I get into one.

Fortunately I seem to have discovered another means of getting that creation reward. See, I also make stuff.

I’m not going to sugarcoat it. When it comes to crafting, I’m an amateur. I have at least as many ugly, failed crafts hanging around my house as I do ones that are pretty or, if not, at least useful. But the act of doing something with stuff and turning it into other stuff is as rewarding as writing, and at the end, I usually have something I can do something with right away, instead of wait an agonizing six to eight weeks on a submissions review and then hurry up and wait some more with editing (which is SO IMPORTANT, I know that as an editor myself, but waiting is hard and I’m bad at it).

I don’t know why Making Stuff works for me. I mean, probably I could come up with something—I took a class back in undergrad, something or other on creativity. “Artist dates” were a major part of the course—making time to just do stuff for the sake of it without expectation. Journaling was another part; the professor made us write 3 pages of stream-of-consciousness a day to test the theory that we needed to get the garbage out before we could get to the good stuff. To be honest, I didn’t pay that much attention to the course. I was a lazy student and ended up writing about 27 handwritten pages all at once before the end of the semester. (I do admit that the last 24 were probably easier than the first three.) But I think it might’ve been onto something.


In the past year, I’ve made two serving trays (one for myself, one a housewarming gift for my brother and his fiancée), three travel-themed paint prints, a set of patio cups with a distinctive design for each family member, a wall hanging that proclaims KEEP CALM AND WALK THE DOG, Christmas ornaments with the names of the guests at our holiday party, Halloween decorations, a custom dog bowl (BONE APPETIT), holiday cards and gift tags, and an entire gallery of wall art for my office.

The mini gallery wall in my office.

I also, for the first time since I can remember, finished writing two books by myself in the same calendar year.

Those of you who may be fellow nerds might be thinking now that correlation is not the same as causality. I know that. I do. I’ve often said that I need to be busy to have inspiration to write. But now I wonder if that’s cause or effect.

Here’s what I think: the knowledge that I can still create even when I can’t words—and the outlet and explicit permission I’ve given myself to make an ungodly mess in my dining room—keeps me from stressing out when writing doesn’t go the way I want it, and that keeps the pressure from compounding and getting worse to the point where I abandon projects.

And frankly, even if it’s a placebo effect, I don’t care. It. Works.

Sometimes, though, it gets a little dicey. Ask the scratches on my dining room table from when I repurposed a picture frame. Or my slightly singed eyebrows when I tried to light a luminary we’d used spray adhesive to put glitter on at a holiday crafting party. Or the paint on my dining chair upholstery. Or the abandoned wood canvas in my garage. Or my mounting Michaels bills, or the current state of my craft storage. I have just as many unsuccessful crafting projects as I have abandoned manuscripts. But that’s okay. Each one of them has taught me something, even if that something is “some things can’t be fixed.”

For His Leading Man, I had the pleasure of giving someone else writing trouble for a change, and nudging him into working through it—though my character never picks up a paintbrush. Instead he learns to work through his writing problems from the other end of the creative lens. See, like many of us have experienced, Steve’s writing a story that turns out to be different from the one he thought he was writing….

ASHLYN KANE is a Canadian former expat and current hockey fan. She is a writer, editor, handyperson, dog mom, and friend—sometimes all at once. On any given day, she can usually be found walking her ninety-pound baby chocolate lapdog, Indy, or holed up in her office avoiding housework. She has a deep and abiding love of romance-novel tropes, a habit of dropping too many f-bombs, and—fortunately—a very forgiving family.