Thanks for checking out the blog tour for Cash Plays, the third book in the Seven of Spades series!

After the Seven of Spades returns at the end of Trick Roller, they resume their vigilante mission with a vengeance. Levi and Dominic do their best to keep up, but a bloodthirsty serial killer isn’t the only threat they face… 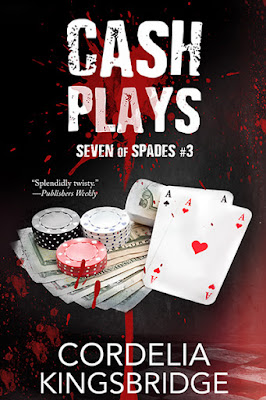 In this game, the stakes are life or death.

The Seven of Spades is back with a vengeance—the vigilante serial killer has resumed their murderous crusade, eluding the police at every turn. But a bloodthirsty killer isn’t the only threat facing Sin City. A devious saboteur is wreaking havoc in Las Vegas’s criminal underworld, and the entire city seems to be barreling toward an all-out gang war.

As Detective Levi Abrams is pushed ever closer to his breaking point, his control over his dangerous rage slips further every day. His relationship with PI Dominic Russo should be a source of comfort, but Dominic is secretly locked in his own downward spiral, confronting a nightmare he can’t bear to reveal.

Las Vegas is floundering. Levi and Dominic’s bond is cracking along the seams. And the Seven of Spades is still playing to win. How many bad hands can Levi and Dominic survive before it’s game over? 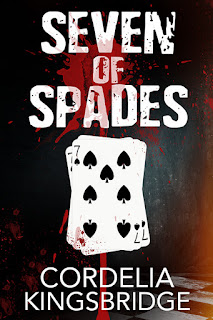 Writing Dialogue-Heavy Scenes
From my earliest conceptualizations of the Seven of Spades series, I planned to introduce an FBI profiler in Book 3. The profile of a serial killer is drawn from the characteristics of their victims, the characteristics of their crime scenes, and any communications with the killer themselves. I seeded the first two books with evidence that would support the profile I wanted to the FBI agent to eventually present. For example, the fact that the Seven of Spades’ murders occur at all times of day suggests that they have a job with a flexible schedule and a degree of autonomy.
When I reached the point of actually writing the scene, however, I was presented with a challenge: writing a very dialogue-heavy scene in which a great deal of information needed to be discussed concisely, while still being interesting and fast-paced. That kind of scene can be intimidating if you try to just jump in and write it from scratch, so I used one of my favorite techniques first – writing the scene in script format.
I do this often, not just for dialogue-heavy scenes, but also for long sequences of complex actions (especially fight scenes). Essentially, what I do is outline the scene from start to finish using only dialogue, occasional notes on intonation/expression, and very simple actions pared down to what are basically stage directions. Here’s an example from the briefing scene in Cash Plays:

R: Since the Seven of Spades reappeared in August, they’ve killed at a rate of about once every two weeks. [gestures to chart] But it’s now been over two and a half weeks since the last murder, with no word from the killer. Why?


M (slowly): Because Levi’s been on vacation.

This technique allows me to organize the necessary dialogue and basic blocking of the scene without having to worry about the flow of prose, dialogue tags, internal narrative, and so on. Once I have the content of the scene nailed down, I go back and rewrite it in prose format – much more quickly and confidently than if I’d tried to balance the demands of content and style simultaneously.


I’ve also found that this technique works well for writer’s block. If you’re struggling to eke out any words at all, it may be easier to write a script than full-on prose!


To celebrate the release of Cash Plays, Cordelia is giving away a $15 Riptide credit! Leave a comment with your contact info to enter the contest. Entries close at midnight, Eastern time, on June 9, 2018. Contest is NOT restricted to U.S. entries. Thanks for following along, and don’t forget to leave your contact info!