Blogtour: All That Glitters by Kate Sherwood 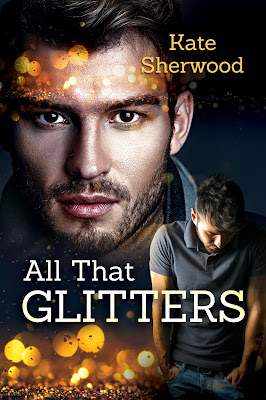 No matter what he tells himself, wealthy NYC architect Liam has never been able to forget his first love, Ben. But as he approaches midlife and realizes something is missing, can he forgive himself for the worst mistake he ever made—the one that left a hole no amount of career success can fill? Or will fear keep him from the full life he really wants?

Liam and Ben were childhood sweethearts, then college boyfriends. But when Liam cheated on Ben, Ben forced himself to cut ties and move on. He’s still living in the small town where they grew up, teaching, but it’s not the life he imagined for himself as a younger man. Still, when Liam returns, he can’t risk his heart again. He certainly can’t allow himself to love Liam again after fighting so hard to get over him.

Neither man wants to let go of the past and face their apprehension at starting over. They don’t want to fall in love a second time—but sometimes love happens whether it’s wanted or not.

I think I’ve gotten a bit spoiled writing m/m romance. I’ve gotten used to the greater freedom, the way readers are more open to different characterization. I’ve written drug-addicted prostitutes, asexual street kids and neurotic drama queens as romantic heroes in m/m – think I could get away with that in m/f? Probably not!
But I think I got a little cocky. (Cocky! Wow, what a useful word) I forgot that while m/m is more open than m/f, there are still some rules, and a few years ago I broke one of them in Chasing the Dragon. One of my characters cheated on the other.
It made sense to me, in terms of the character (drug-addicted prostitutes aren’t known for their good judgment or their sexual reserve) and the plot (the characters got together way too fast, and I needed to show that their infatuation hadn’t solved all their problems). It was a good writing decision, in non-genre terms.
But I heard from quite a few romance readers who were really disappointed. Disgusted, even.
And I believe in the contract between authors and readers—I believe that authors have a responsibility to their readers and should work hard to meet expectations. But, but…
I also like pushing boundaries.
So after the last outing, the idea of cheating stayed with me. Is it ever acceptable for a romance novel to include cheating between the romantic leads?
Maybe if it was really long ago? And they broke up over it, for sure. And the one who was cheated on is still mad about it, but they were just kids at the time and the other character is so, so sorry… can it work for readers?
I sure hope so, because that’s the idea behind my new novel from Dreamspinner, All That Glitters. I’ve written a character who killed the other hero’s brother and I managed to get those two together without significant reader complaints (Mark of Cain). Surely I can help them work through some ancient history, no matter how painful it was?
I gave it a try. I hope it works for you guys!

Kate grew up near Toronto, Ontario (Canada) and went to school in Montreal, then Vancouver. But for the last decade or so she’s been a country girl. Sure, she misses some of the conveniences of the city, but living close to nature makes up for those lacks. She’s living in Ontario’s “cottage country”–other people save up their time and come to spend their vacations in her neighborhood, but she gets to live there all year round!

Contemporary, suspense, scifi or fantasy–the settings are just the backdrop for her characters to answer the important questions. How much can they share, and what do they need to keep? Can they bring themselves to trust someone, after being disappointed so many times? Are they brave enough to take a chance on love?

When she’s not writing as Kate Sherwood (m/m romance), there’s always Cate Cameron (m/f romance, YA romance) and Catherine Dale (everything else). There are so many stories just waiting to be discovered!