Author Of The Month - Isobel Starling - Week One

Today we're kicking off our month-long celebrations for the amazing

In our first post, we'll take a look at the Pretty Boy books, plus Man Crush. We also have a list of Isobel's favorite things and a change to win one of her books!


First up, Fall Together (Pretty Boy #1) 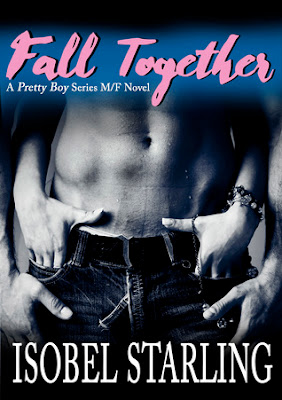 Two hearts collide on a London rush-hour Tube train. Artist Emily Raven really has no choice in getting up close and personal with model Pieter Bayer when they are pushed together in a crowded train carriage. Their close proximity kindles a conversation, which leads to them discovering they have an acquaintance in common—art director Darien Hollgoode. So when Pieter invites the artist to accompany him to the photo shoot he’s heading to, Emily decides it’s a perfect opportunity to catch up with her roguish old friend Darien, and spend time with her gorgeous new friend, Pieter.

However, the couple have friends who are not so happy about their blossoming relationship. Pieter’s best-friend Simeon is secretly in love with him, and Emily’s manipulative old friend, Darien, holds an explosive secret to Pieter’s past that will change everything. Two years after a breakdown fueled by unrequited love, drugs, and booze, Simeon is clean and wants to stay that way. On his road to reclaiming his life and modeling career, Sim first needs to apologize to the man he hurt the most -his ex-best friend Pieter Bayer. Pieter now has a long-term partner, artist Emily Raven with whom he shares a baby son, and so Simeon is amazed when Pieter accepts his apology and invites him into his life again.

Closeness to the object of his obsession sees's Simeon's longing for his friend rekindled, but then Simeon meets a troubled older man who turns his world upside down. Simeon has to decide whether to allow himself to fall for the man who wants him or pine for the man he can never have.

And third in our line-up today, Man Crush 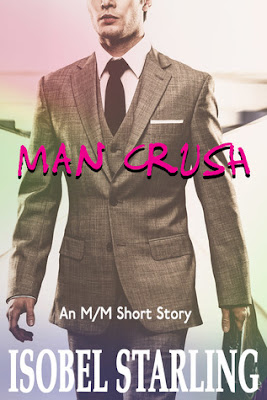 When Marcus's assistant Kyle neglects to send him the report he'd been waiting for and goes to lunch, Marcus has no option but to poke around on his errant employee's computer. He finds that his assistant spends more time browsing than working, and his favorite site is Undr, a website where men post covertly taken photos of hot men traveling on the London Underground.

Marcus is drawn to a photo of a man who was given the moniker "Java Joe". The man has a fanbase of gay men and straight women who take secret photos of him as he travels and upload them to the website, then discuss his attributes.

Over the next few weeks, Marcus becomes obsessed with seeing the next secretly taken image of the man. Heading for an earlier train one morning, he happens upon none other than "Java Joe" in the flesh.

Unable to prevent closeness on the packed morning train, Marcus and his man crush get caught in a crush of bodies... and sparks fly.


“Damn it, do I have to do everything myself?”  I roared to the empty office. I put the bitten apple down on my desk and stood abruptly; then I stomped out of my office and into the small anteroom Kyle used as his office.  His desktop computer was still on and logged into the office intranet, which was against company policy. We were all told again and again by IT that we must log-out when we leave the building.
I sat down at Kyle’s desk, noticing a bag of Gummi Bear’s had been spilled over the tabletop, and there were two old take-out coffee cups.  I gritted my teeth. His desk was a mess. Was he just drinking coffee, and eating sweets all day? What if a client had come in for an impromptu chat?  I decided that I would have ‘words’ with Kyle on his return.
I shuffled the chair closer to the desk and clicked Kyle’s computer mouse.  The screen lit up, and I scowled when I saw Kyle had been surfing the internet on office time when he should have been compiling my bloody report.  I was furious. My anger felt like a burning ball wedged at my solar plexus. It was the last straw. If I kept this guy on I was going to have a heart attack before I turned forty next month.
The browser opened on the landing page for a website I’d never seen before.  The site was called Undr, and the design appeared young, colorful, and fresh.  From my first impression, I wondered if it was a TV extra’s website, or maybe modeling.  I stared at the screen, my fury bubbling under my skin. So THIS was what I paid him for?  My eyes fixed on a photo of a, quite frankly, ‘smokin’’ hot man wearing running gear. He was standing in the aisle of a London Underground Tube carriage gripping a chrome pole to steady himself.  His sweatpants clung to his bubble butt, and his sleeveless vest ensured the tribal tattoos on his arms were on full display. My ‘other brain’ perked up and took notice.

With such a heavy workload and bucket-loads of stress, sex was the last thing on my mind, and, honestly, these days my libido was so low that if I could get an erection, it would be a miracle.  My single status didn’t help either. In my younger days, I was very sexual, but I just didn’t have time to date, and when I did have spare time I was too exhausted to move my butt any further than to the couch, with a pizza, wine, and the remote control.
The man on Undr was a beautiful chunk of masculinity, and admittedly if I’d seen him on the London Underground, I would have paid attention too.
I scrolled through the images on the site and now understood that I was not, in fact, looking at modeling shots, as I’d first thought.  Undr was a website where gay men and straight women anonymously uploaded photos of attractive strangers they saw while riding the London Underground.  Viewers could rate the attractiveness of the men in each image and discuss attributes they liked and disliked about them.
It was shallow, and honestly, I felt uncomfortably like a bit of a pervert as I scrolled the images, hating myself, but I was unable to stop.  Surely this website must be illegal? I was aghast that it could be okay to take a photo of a stranger and upload it to the web for judgment by the whole world.  But as I scrolled, a line-up of totally hot men passed my eyes. My rational, logical, moral brain fought with my dick. Its sudden attentiveness surprised me—there is still life in the old lad!  When I happened upon an image of a tall, dark-haired man wearing a white shirt, I stopped scrolling. The shirt he wore clung to silhouette the musculature of his torso, and tight suit trousers effortlessly displayed athletic thighs and a biteable ass.  My neglected dick got the victory it deserved.
“Ho-leey Fuck!”  I was glad I was alone in the office because I prided myself on having impeccable manners while at work.  Beneath the image of the attractive man, the uploader, D-dawg, had given the man in the photo the moniker of Java Joe.  Underneath that, the location the photo was taken at, the time, date and ‘other’ details were listed.  As I avidly read on, I discovered that the man named Java Joe had been labeled so because when he’d exited the train carriage, D-dawg noticed the embroidered logo for the Java Joe coffee chain on his shirt.  Java Joe had been photographed on a Northern Line train between Highgate and Archway at 6:50 a.m. last Wednesday, but D-dawg was unsure which station the man got on at.  He did share that the man alighted at Waterloo Station at 7:15 a.m.  It was the very same station I got off every day at too, but I traveled to work an hour later than Java Joe.
I scrolled through the comments and saw that other users covertly located Java Joe on morning and evening trains and also photographed him.  In fact, it looked like this thoroughly handsome man had a large fan base of stalkers.
I was repulsed and affronted on his behalf.  He was clearly being fetishized, but still, I could not stop myself from staring at him and hungrily scrolling down to the next image on the page.  I wondered if he was aware of the unprecedented online attention. If I thought too long I knew I would find the whole thing creepy, but his body was incredible, and when I found a close-up shot of his rugged face and his soulful eyes, something seemed to snap inside me.  I knew then I had to find out his orientation, and if he was available.


1. My Bed.  Sleep is a rare pleasure for me as I suffer from intermittent insomnia, so when I do relax enough to sleep my bed is my most favourite place to be.
2. A good audiobook read by an amazing narrator.  This is one of life’s simple pleasures and goes hand in hand with my bed.  I love curling up with a huggy pillow and being read to by a talented narrator.
3. Comedy – If you can make me laugh you’re onto a winner.  I love comedy. When I go to gigs it’s usually British stand-up comedy, I also have a soft spot for improvisational comedy.  I love it when a group of talented actors work together and can pluck the funnies from the air just using audience suggestions.
4. Roast dinner-My food tastes are very simple.  I can’t stomach spicy food so a well made roast dinner- chicken or beef with all of the trimmings always hits the spot.
5.Massage – I love having a back massage with lovely scented essential oils.

Isobel Starling spent most of her twenty-year professional career making art in Ireland. She relocated to the UK and, faced with the dreaded artist’s creative block, Isobel started to write and found she loved writing more than making art. Isobel is currently working on her sixteenth book. The Shatterproof Bond series is an Amazon Gay Romance bestseller and is being translated into French with Juno Publications, German with Deadsoft Verlag, and Italian with Quixote Edizioni. The series is also available as audiobooks, narrated by Gary Furlong.

“Fall Together” and “Sweet Thing” will be translated into French by Reines- Beaux Publishing.

“Silken” is in audio, narrated by Gomez Pugh. “Silken” is also available as a German translation, and will be translated into Italian, and French in 2018.

Thank you for celebrating this fabulous author with us. Come back next week for more of Isobel's books, five little-known facts, and another chance to win.