In our final post, we'll take a look at Back Where He Belongs and Detective Fox And The Christmas Caper, with excerpts. We also have a super exciting chance at winning one of two offered Art Zines Isobel created for the Shatterproof Bond series, of which there are only 100 in existence.


Let's start with Back Where He Belongs 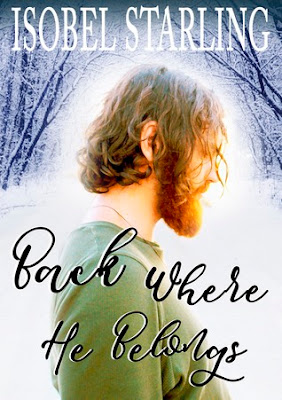 Back in Scotland after five years working in Australia, Kier Campbell finds himself stranded on a road in the Scottish Highlands on Christmas Eve. He has to get to the next village urgently or freeze to death in his broken down hire car. Kier hikes down the icy road and as he walks memories of the life he'd run from-and the love he'd abandoned in Scotland return to haunt him.

With a blizzard fast approaching, a passing motorist finds Kier and offers him a lift. He is surprised to recognize the driver. As the weather worsens he realizes they is no way he will reach his parent's farm, and so is stranded with his savior for the holidays.

Kier's one Christmas wish is to make up for the mistakes he made all those years ago, but, curiously, he finds he has an unexpected rival for his lovers' affections...


Kier had forgotten how hungry he was, and the comfort food was just what he needed to push the last of the winter chill from his bones.  The sounds Mac was making as he chased his metal dog bowl around the flagstone floor in the kitchen were comical, and between eating, watching the dog, and glancing at Douglas, Kier found he was fully entertained.
“So tell me,”  Douglas reiterated between mouthfuls, “What have you been up to fer five years?”
Kier paused and laid his spoon down.  “I did what I said I’d do too. I’ve done a fair bit of traveling, but I manage a sheep station in Queensland and…”
“Are you seeing anyone?”
Kier’s eyes met Douglas’s, and he laughed nervously.  “Are you?” He retorted.
“I was, for three years, but that’s been over for a while now.”
“Oh,” The fact that Douglas had been in a long-term relationship with another man made Kier’s gut clench.  His brows arched and he glared at Douglas imploring him to fill in the blanks.
“His name was Rob, we lived together, here,” Douglas informed succinctly.  He picked up his glass of red wine and knocked it back as if he needed the courage to go on.  “He ended it—said I was obsessed with work—left me for a younger man—left us.” He added, looking regretfully over at Mac, who was sitting at attention, his ears pricked.  The dog padded over as if sensing his master needed some affection. He laid his head on Dougie’s lap, and Douglas absently stroked him.
“He didn’t understand just how much work establishing my new business would take.  Course I work hard. I’ve put everything I have into Highland Red! “ Douglas justified.  “I bought MacLeod when he was a pup. He was from a litter of eleven. They were chestnut, but he was the only one who had your rust-red coloring.” Douglas explained.  “I knew he was the one for me. I bought him as a gift for Rob, but when he left he said Mac had always been mine, never his, and so he walked out on us both, didn’t he boy?”  Dougie said, holding Mac’s head in his hand. “It seems to be a bit of a pattern in my love life,” Douglas continued in a self-mocking tone. It appeared Douglas felt more comfortable telling his woes to the dog instead of Kier.
Dougie’s last sentence cut Kier deeply, “Don’t say that.”  He narrowed his eyes and grimaced guiltily. Hearing that another man had done the same stupid thing and walked away from Douglas smarted and made him feel like even more of a heartless bastard.  Douglas was a good man with a big heart. He didn’t deserve to be abandoned once, let alone twice.
“I’m sorry that happened.  Just show’s ye, there’s more than one blind feckin’ eejit in the world!”
Douglas turned his head from Mac to consider Kier.  Kier held Douglas’s questioning gaze and then admitted, “I’m, eh, not seeing anyone.  I haven’t—not for more than a couple of dates.”
“In FIVE YEARS?”  Douglas was gobsmacked.  “Jesus Freckle, that’s just not right… it’s…”
“What?”
“You’re a good lookin’ man.  When we were together, you loved…sex.  I thought that you’d at least be sowing yer wild oats.”
“You know I’ve always been the handy sort.  I’ve survived.” Kier scoffed sheepishly and sat back in his chair.
The men observed one another like cowboys readying for a duel.  “God, we are such a pair of fuck-ups!” Douglas exclaimed. Mac chuffed disgustedly then trotted off to his place by the fire.
“Even the dog agrees!” 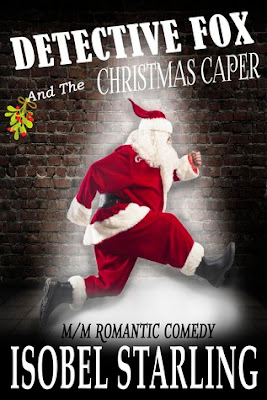 Every good Dick needs a sidekick… Actor Tom Lewis’s world came crashing down when a honey trap and tabloid exposé outed him and put pay to his flourishing career. The housewives favorite was most well-known for his role as ‘Detective Fox’ in the quaint British series 'Malmesbury Murders'. But after the media speculation about his sexuality, the show is in hiatus and Tom hasn’t worked six months.

Now things are getting serious, the money he made from M.M is running out and he needs a job desperately. So when Tom’s agent offers him a six week seasonal acting job, he reluctantly agrees… and takes on the role of Santa for a top London department store.

This decision changes Tom’s luck. Not only will he have an income for the holiday season, he’ll also be working with a very sexy young elf that he spotted at the auditions, named Eli Mason.
The plot gathers pace when, during a break Tom overhears two unidentified store workers discussing a ‘job to get a little Christmas bonus”. He realizes the job is of the illegal sort. Now, Tom could call the police, but then again, wouldn’t it be great for his flagging career if Detective Fox saved the day?

So Fox is on the case, and as every good Dick needs a sidekick, Tom decides Eli will fit the role, in more ways than one.


Tom’s home was everything that Eli had expected.  The top floor of the building was split into two penthouses.  Tom’s penthouse was on the left and on stepping into the lounge; Eli could see it had a large bank of floor-to-ceiling windows.  He took in views of the City of London’s night lights, all the way down river to Vauxhall Bridge.  It was a spectacular view.
The décor was masculine and stylish, as were the furnishings.  Eli removed his coat, bobble hat, and bag, and then tossed them on the brown leather couch.  He strode to stand by the window, where he nervously watched the twinkling lights of a passing river barge.
On entering the apartment, Tom had headed straight into the open-plan kitchen.
“Nice place,” Eli called to Tom.
”Thanks.  How do you take your Gin and Tonic?” Tom hollered.

“Orally,” Eli quipped in reply, and Tom’s roar of laughter echoed around the living room.
Tom mixed the drinks to his taste—a big glug of Bombay Sapphire Gin, easy on the tonic, ice, lemon, and lime.  Then, he carried the two glasses to the lounge and placed them on the coffee table.  Tom smiled in satisfaction, pleased that Eli had agreed to come home with him. The younger man had been such a teasing distraction for the past two-weeks of rehearsals.  Each glance of those tawny eyes tugged at Tom in the most disarming way. And then, the abduction in the hallway the previous afternoon—Tom wished he could have admitted just how much being dragged into an alcove and pinned to the wall had turned him on.  He’d been going crazy with desire, pressed up against the hard wall with Eli molded into his back, and Eli’s hand firmly over his mouth. But, now the wait was over, Eli was in his home, within reach, and he would take pleasure in the frustration of teasing things out just a little bit longer.
Eli saw Tom’s reflection appear in the window, standing behind him.  Arms snuck affectionately around Eli’s waist and drew him back into a hug.  The scents of smoke and alcohol from Tom thrilled his senses. Tom’s stubbled jaw pressed to Eli’s soft cheek, and they rubbed together.  A pleasurable moan rumbled from his chest, and then Tom’s mouth was on the nape of Eli’s neck, using his Tequila shot technique of lick—sip—and—suck.
Eli became boneless.  He ground his ass back searching for Tom’s hardness to push and grind against, and MY GOD, there was something incredibly big and hard bulging there.  Tom stilled on contact and then edged his crotch away, ending the illicit touch. The reaction confused and frustrated Eli.
“What do you want to do?”  Eli asked breathily.
“I need you to fuck me, nice and slow.  Can you do that for me? Please?” Tom begged, his Northern English accent sounding rough and desperate.
“Is the Pope catholic?”  Eli laughed, but Tom wasn’t laughing.  Eli watched Tom’s reflection and saw from the intensity in his eyes that he was very serious indeed.  Eli found it deeply erotic to have the question asked so formally. His usual hook-ups consisted of drinking, dancing, and then going back to somebody’s room and launching himself at the random man he’d picked up.  Sex was quick and based on the primitive need for release. There was no space for polite conversation.
Eli drew his arm up, and his hand caressed Tom’s hair.  “I’ll do anything you want,” he said softly, reinstating his willingness to get on with things.  Of course, he would do anything for the man. Eli had fancied him for years. Abruptly, the touches and kisses ended.  Surprised, Eli turned in Tom’s arms, cupped his stubbled face, and leaned in to kiss his mouth. Tom moved his head back and took Eli’s hands in his own.
“Not yet,” He said insistently, “I need to prep,” he said, and then led Eli to the bedroom.  “You make yourself comfortable. I’ll be a few minutes.” 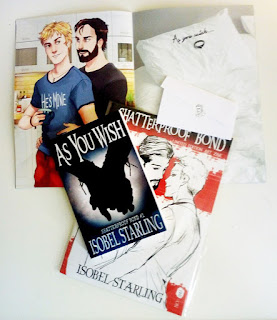 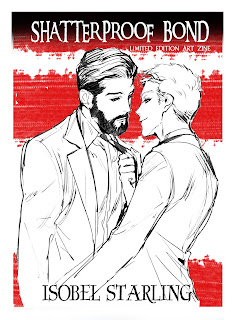 This giveaway is open internationally but requires providing a physical address or PO Box.


Thanks for celebrating this fantastic author with us. We hope you found a few more books to add to your TBR and learned some interesting facts about Isobel Starling.