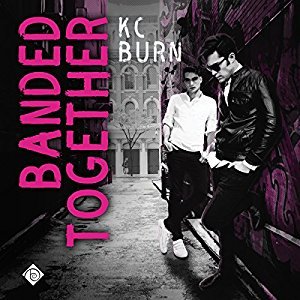 
Punk’s not dead, but it’s time to redefine life.

Devlin Waters thought he’d have music forever. But the tragic death of his best friend ended the twenty-year run of his punk band, Negative Impression. Unable to process the loss, Devlin distances himself from everyone and everything that reminds him of the band. But forty-one is too young to curl up and wait for the end. In a search for a second career, he finds himself at university with a bunch of kids young enough to be… his kids. His sexy archeology professor, however, makes Devlin think about life beyond his grief….

Dr. Jack Johnson does not appreciate Devlin’s lack of respect, his inability to be serious, or his chronic lateness. Worse, he hates that he’s attracted to a student. When he realizes Devlin is the rock star he crushed on in his youth, he drops his guard—against his better judgment.

Before they can move forward together, Jack must admit to Devlin that he’s not only an admirer, but he also sings in a cover band. How will Devlin react to his ultimate fanboy when his own music has died?

While 'Banded Together' isn't part of K.C. Burns 'Toronto Tales' happily it's set in and around this city...Oakville!!! With a lot of events actually taking place in the city of Oakville which is one of several cities that share boundaries with the GTA (Greater Toronto Area) and admittedly one of the most desirable ones to live in.

Ok, so much for geography class...sorry about this but Toronto is just under 2 hours from where I grew up and  just 2 hours from where I live now. While I love reading books that are set in places I've never been sometimes it's nice to read stories set in places that I know. So there's reason 1 why I liked this story and yes, it's very subjective.

Now as for the story...if the location was something I like and part of what got me interested in this story...the story itself was what kept me reading. I liked the pacing in this one. It's a bit of slow burn but for so many reasons...slow burn was the perfect pace for this one.

After a 20 year run as the lead singer for a rock band that ended with the unexpected death of Devlin's bandmate and best friend, it's time for Devlin to find a way to move on and returning to school and beginning again as a student studying archaeology now that he's lost the music in his life is the path that Devlin plants his feet on. Needless to say Devlin finds himself surrounded by a group of students who for the most part are young enough to be his kids but what truly surprises him is the hotter than hell Dr. Jack Johnson who catches his eye gives him more than an interest in archaeology that brings him to class.

When Jack realizes who Devlin is, he's determined to keep his distance but being in constant contact with the man who has fueled Jack's fantasies as well as inspiring him to be the lead singer in a cover band does nothing for his ability to resist the temptation that is Devlin Waters.

There's a definite age gap between the MCs but because of where they each were in their lives, I didn't feel the power imbalance that can occur with age gap stories and I really liked the interaction between these two.

While Devlin was at times a bit self absorbed it wasn't unrealistic to me as he was dealing with his grief over the loss of his friend and let's face it we all deal with grief in our own way and our own time so that Devlin struggled with it to the point of it being debilitating emotionally for him for me this only added a touch of realism to the story.

I've been finding lately that I have a bit of a newfound appreciation for a 'slow burn' story, not that I want them all to be slow burns but once in a while it's nice to feel like there's a little more or at least as much development given to the emotional development of a story as the physical aspect.

'Banded Together' was a really enjoyable chance to revisit the writings of K. C. Burn and on audio it was also an opportunity to once again listen to the narration of Darcy Stark. This is only my second time listening to this narrator and like the first time I was not disappointed. I thoroughly enjoyed the quality of the audio...my 'basic list' for audio books was easily ticked of and I'm going to try and explain this but one of my peeves about audio books is when voices don't sound appropriate to who the  person is. Thinks like younger children don't really sound like small children or they have a perpetually annoying, obnoxious or whiny sound to their voice or women's voices sound more like a man trying to do a woman's voice than simply a woman talking or sometimes when the voice doesn't match the physical image of a man...don't get me wrong I know these things can happen in real life but when it's an audio book the character representation is based strictly on the image created by the words in the story and the voice.

Truthfully in real life I don't care how a person's voice sounds because in general I also get the physical representation of the person to create the image but in an audio book those voices need to work overtime to create a physical image as well as the vocal one so yeah, sorry to say but when it comes to an audio books sometimes a little stereo typing needs to occur unless a story tells me that the character looks one way and sounds another than I need my macho men to have macho voices, my children to have children's voices and my women to sound like women and while I'm not sure about the children (because there weren't any in either book that I've listened to)...Darcy Stark definitely nailed it for me with the voices in this one and I thoroughly enjoyed his narrations. I'm actually hoping to listen to a book narrated by him that has at least one child in it just to see how he does because so far I have not been disappointed by this narrator.

I'm not a big fan of 'rock star' MCs but the author's definitely created a character that I enjoyed in the form of Devlin Waters and while archaeology isn't really my thing I think I could enjoy watching Dr. Jack Johnson teach a class or two.

An audio book of 'Banded Together' was graciously provided by the publisher in exchange for an honest review.