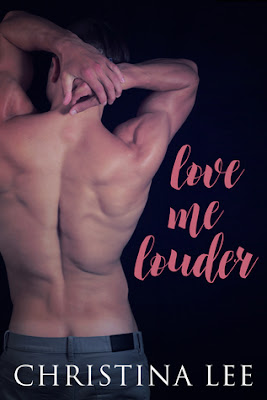 I read this book in one sitting last night and reread bits and pieces today. I can't stop thinking about Noah and Will, whose relationship begins with assumptions and continues on a road of insecurity, self-doubt, and an unwillingness to love LOUDER.

After all, it's scary to be loud; it requires you to shout, to be seen.

Noah doesn't want to be seen. He suffered through a horrific accident when he was an adolescent and has the scars (actual and metaphorical) to show for it. Noah knows how to hide. He hides with shirts and long hair; he hides behind his sales persona. He hides by keeping his friends at arm's length and never putting himself out there, certainly not with someone as gorgeous as Will.

But Will, as perfect as he appears, has sorrows and problems of his own. Will's mother suffers from a serious mental illness, and Will works two jobs (at a home decor store with Noah and as an escort) to support them and pay her medical bills.

What begins as a business arrangement turns into something beautiful and deep, something abiding and TRUE ... if only the men would let go of past hurts and trust in one another.

The relationship between Will and Noah develops organically. Both MCs realize they prejudged the other unfairly. Will sees Noah, REALLY sees him, and thinks Noah is stunning not just on the inside but on the outside too. Will doesn't care about Noah's scars. He knows the kind of person Noah is and wants to take care of him.

And Noah isn't daunted by Will's home situation. He wants to help, wants to be there for Will. Even as he shies away from emotional entanglements, Noah can't help but fall for Will.

Noah's heartbreak killed me. He really believes he has to pay a man to touch him. He's scared of falling for Will, scared to believe Will wants HIM, not the money.

There's plenty of sensual moments in this hurt/comfort story: kisses, caresses, and fishnet stockings! Oh, yes, Noah has a bit of a kink.

Nothing here feels rushed, and the secondary characters—Noah's overprotective but well-meaning parents, his friends Tony and Matt who throw a big birthday/secret engagement party where Noah and Will's journey truly begins, Will's sick but not broken mom—all add to the story (instead of detracting from it).

Will helps Noah build bridges, while Noah helps Will tear down walls.

It's a beautiful thing.