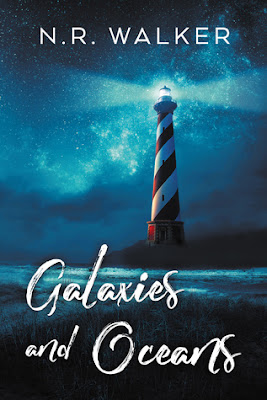 
Seizing his one chance to escape, Ethan Hosking leaves his violent ex-boyfriend, leaves his entire life, and walks into the path of a raging bushfire. Desperate to start over, a new man named Aubrey Hobbs walks out of the fire-ravaged forest, alive and alone. With no ID and no money, nothing but his grandfather’s telescope, he goes where the Southern Cross leads him.

Patrick Carney is the resident lighthouse keeper in Hadley Cove, a small town on the remote Kangaroo Island off the coast of South Australia. After the tragic death of his lover four years ago, he lives a solitary life; just him, a tabby cat, the Indian and Southern Oceans, and a whole lot of loneliness. He’s content with his life until a stranger shows up in town and turns Patrick’s head.

Patrick never expected to be interested in anyone else.

Aubrey never expected to be happy.

Between Aubrey’s love of the stars and Patrick’s love of the ocean, these two fragile hearts must navigate new waters. If they can weather the storm of their pasts, they could very well have a love that eclipses everything.

This is one of the most romantic books I've ever read. Aubrey and Patrick are so good to each other. Even though Aubrey's life as Ethan was filled with abuse and pain, he doesn't let that define him. He walks through a fire and emerges from the ashes a stronger man, a man determined to be free.

The Southern Cross constellation leads Aubrey—who takes his beloved grandfather's name—south to a small Australian town on the coast where a lighthouse keeper awaits. His grandpa always told him to trust the stars.

Patrick is no stranger to grief. He is endlessly fascinated by the ocean and knows better than anyone how cruel a mistress she can be. The symbolism of Patrick being a lighthouse keeper wasn't lost on me; he become Aubrey's beacon of light, the one who guides him home.

"Everything about you means comfort to me ... Kind of like I'm lost at sea and you're the lighthouse and safe harbour. I know when I'm with you, no one can hurt me."

A layer of tension cloaks the story. Aubrey walked away from his identity, from his violent ex-boyfriend who has much political clout, but can we ever really escape our past?

Aubrey works hard to make a place for himself, and Patrick just wants to take care of him. They share meals (Patrick is a wonderful cook), visit the penguins, hang out with seals, and have picnics in the lighthouse. Even Patrick's cat falls for Aubrey. When Aubrey sprains his ankle, Patrick, literally and metaphorically, carries him.

This book is entirely relationship and character driven; both MCs are complex people with hopes and fears and desires. Their connection is instant, but the trust takes a little longer.

Neither man wants to rush into a sexual relationship. Having lost his partner four years prior, Patrick feels guilty about finding love again. Once they do come together, it's sensual and tender and incredibly hot. All those kisses melted my heart.

Even though Aubrey can't share everything with Patrick, he is one hundred percent real. Patrick doesn't care that Aubrey has one pair of jeans or a rough haircut. He thinks Aubrey is beautiful. They talk about the ocean and the stars.

"When you look at the stars, what do you see?"


And even though Patrick is fourteen years older than Aubrey, the age gap doesn't matter to either one of them. Aubrey loves the specks of gray in Patrick's beard and hair.

I adored both men and the love they shared. I loved the small-town charm and the quirky secondary characters, including the nosy but well meaning coffee shop owner who sends out a search party when Patrick doesn't show up for his daily cup of brew; the cop who once carried a torch for Patrick and is summarily suspicious of Aubrey; and the cranky old guy who let Aubrey stay in a van in exchange for maintenance work. And Tabby the cat, of course!

Galaxies and Oceans is a love story about two men who heal each other. It's slower paced and beautifully written, with a distinct Aussie feel. If you prefer more action and heavy-handed plot in your books, this might not be the book for you.

But it was the perfect book for me.