Spotlight: I Am Magical by Briana Lawrence 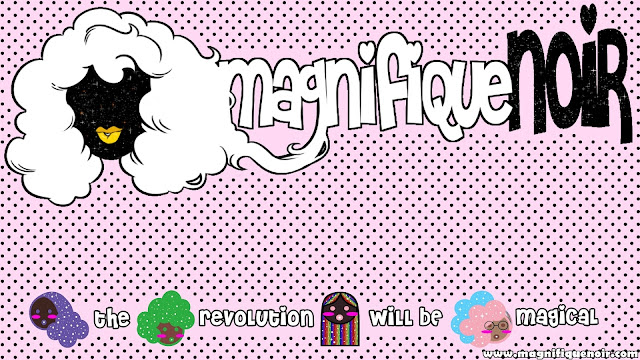 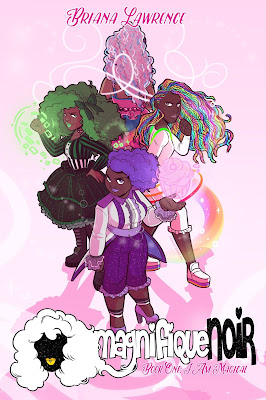 There is a city. It is like most other cities. Buildings. People. Monsters who can destroy sidewalks by vomiting acid onto the ground, and an elite group of black, queer, magical girls who work to put those monsters in their place. See? Just like most other cities. Bree Danvers would have compared it to a video game, maybe a cartoon or comic book, except black girls are rarely the heroines of the story.

But there her heroine stood, plus sized and wonderful, rocking a dazzling amount of purple and defeating monsters with galactic sparkles. Galactic Purple, that was her name, and soon, Bree was joining her on a magical adventure full of transformations and after school battles to defend a city like most other cities. And soon, others would join them, and each one would be magical in their own way... give or take a few bumps on the acid covered ground.

According to Cosmic Green, the pixelated YouTube sensation (at least in her own mind),  “magnifiqueNOIR” is a story about a group of black, queer, magical girls on a quest to protect their city from dastardly foes who have the audacity to interrupt her sacred midnight launches. Of course, Galactic Purple, the leader of the gang, would say that there’s more to them than that. Always full of poise, she knows that they are tasked with defending the city, picking up where the previous generation of magical girls left off. Radical Rainbow, always ready for a challenge, would agree with both of them, while the mysterious Prism Pink smiles at their antics.

This book series is a bit of a love letter to the likes of “Sailor Moon” with a healthy dose of “Representation Matters.” It’s really important to show black girls in a positive light, which is exactly what I set out to do. All the girls are in college, which is when I personally came out, so I wanted to set the story during the time where I really started to explore who I was as a queer, black woman. I’m still discovering things about myself today, but for me, college was when things really started to make sense.

Each girl represents a different part of the queer spectrum, to the point that some of their outfits rock the colors. Radical Rainbow and Prism Pink are probably the most obvious ones, and honestly, Radical Rainbow is the reason why the story got so big. I didn’t plan on there being a huge plot, but she... kinda fought with me (as characters do sometimes). Her arc in the first book is pretty significant, and that, in turn, helped me flesh out the development of the other girls. Because of her, I came up with the idea of the girls facing monsters that reflect some real life issues: sexual harassment, racism, sexism, things like that. And the girls, well, they get to punch those things in the face, which is pretty awesome. This will be a theme throughout the series, and along the way, you’ll get to know more about the girls along with the people who are important to them.

All she had wanted was to have an uneventful, dry walk home, but the universe decided that she had to deal with some unwanted company. Not just any ol’ unwanted company, oh no, it had to be a random man on a self-appointed side quest where he mistook stalking a young woman as a charming character trait. If Bree had to guess, she’d say that the man was old enough to be her father – whoever or wherever he was. This fully grown man had no business making eye contact with an eighteen year old girl’s chest. Where was her mother now to condemn this man to hell? Then again, her mother would potentially blame this on her state of dress, as if she could stop the weather from forcing her into a wet T-shirt contest. “I’m not a toddler, sir.”

“You know that ain’t what I meant,” he said as he stepped closer. “What’s your name?”

Unfortunately, it made him persist. “That ain’t a name,” he laughed.

“I don’t have a name. My parents didn’t bother entering one into the select screen.”

The man’s smile immediately faded, the amused look draining from his face. “I’m just tryin’ to be nice, you don’t have to be such a-”

The man snorted this time. “Y’all black girls are too much, sometimes. Y’all always gotta have an attitude.”

“I guess so,” then Bree turned and walked off.

Bree rolled her eyes and kept walking. What a perfect way to end the evening. Not that she thought she’d gotten away from the creeps who referred to her as their baby. She knew that was a worldwide phenomenon, but did she have to face it now?

Bree had become accustomed to being labeled as unfriendly or, in this case, a bitch, but it never went any further than that. Hearing the sound of someone running after her caught her completely off guard. She felt the man grab her and force her to turn and face him, his eyes wild and chapped lips curled in pure malice toward her. In seconds he had her on the ground, the back of her head crashing into a puddle on the sidewalk with a wet thud.

“W-what the hell are you doing?! Get off of me!” Maybe, if she screamed loud enough, someone would hear her. There had been people outside before, someone had to come to her aid.


Not patient enough to find out, Bree started to struggle against him, but he was faster and had her hands pinned above her head in seconds. “Stay still,” he growled at her. His voice had a much rougher edge to it and Bree was about to chalk it up to pure rage, but then something peculiar happened.

His teeth shifted into sharp fangs.

She’d seen this kind of thing before in television series about teenage wolves, but such bizarre transformations were reserved for the world of fantasy and make believe. Men’s eyes didn’t glow in a blood red hue in real life. Men also didn't drool like rabid animals, the saliva dripping onto her cheek before it was washed away by the rain. Bree wanted to scream but she was too shocked to make any sound come out of her mouth.

The man – creature? – stood up, and with a sickening pop its hand was detached from its arm to keep her trembling wrists pinned down to the ground. The sight of fresh blood leaking out from where its hand should’ve been was what did it. Bree screamed, the sound combining with the sudden rush of thunder that rumbled above them.

“Shut. Up!” Then its other arm stretched forward, its hand clamping around Bree’s mouth to muffle her cries. Its skin felt slimy against her lips and she could taste something sour on her tongue as she kept trying to scream. Bree could finally hear a few people, but they were making the situation worse with their terrified screams as they loudly proclaimed the obvious: there was some kind of ravenous creature attacking a girl in the middle of campus!!! All the monster had to do was look at them to send them all running, leaving Bree all alone with the looming threat.
In that moment, as her attacker looked down at her, many thoughts circulated through Bree’s head. The first thought was one she shut down immediately: this never would’ve happened if she’d been nicer. Maybe she could’ve smiled more, or told the gentlemen her name. She wasn’t about to blame herself for the horrible situation she was facing, even when the creature sneered at her and asked, “Bet you wish you would’ve been more agreeable, huh?”

The second thought she let linger: the danger her mother had warned her about. Granted, she was sure her mother hadn’t meant that a literal monster would be leering at her right now. She was also sure that this wasn’t the temptation that her mother had told her to resist.

The third, and final thought, was one that made the tears flow down her face.

She was about to die, and all she could do was shut her eyes and wait for the inevitable.

But the moment never came.

Bree slowly opened her eyes when she heard her would be killer stumble away from her. She was still being pinned down by its detached hand, but the other that had been covering her mouth was now frantically wiping something from its face. It was a fluffy, purple substance, and there was a sweet smell to it that reminded Bree of fresh baked goods.

“Why can’t monsters like you take no for an answer?”

At most, Bree had hoped for some kind of law enforcement to show up and attempt to fight the creature. Whether or not their bullets would work was debatable, but if they were able to get her to safety that was all that mattered. Instead of men and women in uniform, Bree got a lone girl dressed in purple, white, black, and gray, complete with purple hair that sparkled like its own little galaxy.

Was this actually real life right now? The rain had even stopped in favor of letting this girl sparkle – literally sparkle!

“Who the hell are-” but before the monster could finish, something was thrown at its face again.

Was she throwing cupcakes?!

At the age of nine, like most kids, Briana Lawrence had a dream. She wanted to be the best “WRITTER” in the whole wide world. Her fourth grade class laughed and wondered how one hoped to become a “writer” if they couldn’t even spell the word. Back then her stories were created with crayons and construction paper. As she grew older they progressed into notebooks and colored ink pens of pink, blue, and purple. When she lost her older brother, Glenn Berry, in a car accident, she stopped writing.

Dreams, however, have a funny way of coming back.

Before she realized it she was grabbing her notebook and pens again. She would write stories that ranged from high school romance to her imagination running wild with the likes of Goku, Vegeta, and the other characters of Dragonball Z. This continued throughout college where she would always end up writing about the space exploits of the pilots of Gundam Wing and other works of fan fiction. Soon she realized that she wanted to do more than that. Her head was full of ideas, full of original characters and worlds that she wanted to share with others.

Thus, she stepped into an English Major with some Women’s Studies on the side.

She graduated Iowa State University in 2006 and moved to Minneapolis with her partner. Here, she tried to get into graduate school, but things didn’t pan out the way she wanted. She ended up working retail, her dream becoming buried by Black Fridays and other busy times of year. Once again, however, that dream returned. She went from immersing herself in geeky fan fiction to actually writing about the geeky things she loved for several anime and video game review sites. However, it was her discovery of National Novel Writing Month that made her go back to creating her own characters and plots.

Now, here she is, an author in the writing world.