Review Tour: Hawk In The Rowan by Sam Burns 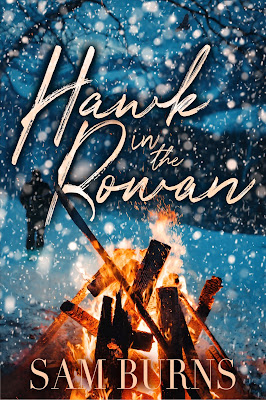 Devon Murphy has been back in Rowan Harbor for three months. He’s taken on a host of new responsibilities, and is in a serious relationship for the first time in his life. He loves the town and its inhabitants, but it’s starting to feel like too much for the former drifter.

Now there’s a storm on the horizon, and it doesn’t seem like things are going to slow down and let him catch his breath. A blizzard is brewing, and three people have gone missing in the woods south of town. Devon needs to find them before time runs out.

This book is the fourth of nine in The Rowan Harbor Cycle, not a standalone. Devon and Wade will return in book seven for their HEA.

Oh, this was so, so good, y'all. This is the 2nd book in the arc for Devon Murphy, head of the town council, and Wade Hunter, deputy sheriff and his mate. While this might be readable as a standalone, I don't recommend you do. You'd miss out on their beginning, and you'd miss out on this quirky, wonderful, amazing town full of supernatural beings who all support each other and try to protect each other from harm of outsiders who would use and abuse them, simply for what they are.

In the very first book of this trilogy of trilogies, we got to meet Devon and Wade for the first time and watched them enter a romantic relationship, amid fighting a threat to the town and Devon coming into his own as he learns about his abilities, being Fae. That book left them with a strong HFN, but I knew that Devon struggled a bit - not only with his newfound abilities and responsibilities, but also with his inner voice that tells that he doesn't want to be tied down, and that he's not what they all see in him.

We see him interact with Salli (a siren), Wade's brother Jesse, who's Devon's best friend, Fletcher and his mate, Jesse's mate Sean, Helena McKenzie who still treats Devon like he's dirt beneath her feet, for reasons we find out inside the pages, the vampire Cassidy, and the wise Oak - all the characters from the first trilogy make an appearance again and further the plot in their own way.


I continue to be amazed by this author's prowess. For most of this book, I was at the edge of my seat, breathless and clutching my Nook white-knuckled. The tension builds slowly, like the blizzard coming, and when the weather unleashes its might, so does the danger, and Devon is right in the middle.

The symbolism is evident - as Devon fights the beast in the woods, he's also fighting the beast within him, the one that doubts, that fears, that wonders. And as he is victorious over the beast without, he also slays the one within. As he saves the towns folk (not on his own, of course), so he saves not only his own heart but Wade's too. And as the beast falls, so does Devon's doubt that he truly is exactly where he's meant to be.

And finally, Devon sees, really sees, what's been in front of him all along. Amazing what happens when you conquer your fears and speak your truth.

Obviously, this isn't the end, and I expect book 5 to pick up where we left off with Jesse Hunter and Sean Anderson as well as a new danger to the town, where all of our new friends have to come together to save the day.

This is such a fantastic series, and I cannot recommend it highly enough. Run, don't walk, to get yourself a copy of these books. They are well worth your time.