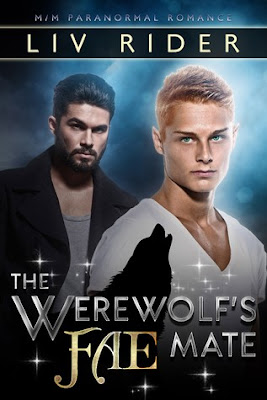 
He never expected his mate to be fae. Now he has to choose between his heart and his pack.

When mixed-blood werewolf Mahon comes across powerful fae magic in a nightclub, dealing with the threat is a chance to prove to his new pack where his loyalties lie. But the threat turns out to be a gorgeous, wide-eyed college student who’s never heard of the supernatural world. After they're attacked by bloodsucking vampire bats, he takes Oscar and his small, angry cat home for their own protection. He’ll definitely tell his pack about Oscar...later.

Abandoned as an infant, Oscar’s always wondered where he came from—he just never expected the answer to include pointy ears, magical powers, and evil forces trying to kill him. Oscar knows he shouldn’t rely on Mahon for help, but it’s hard to resist when a six-foot-six werewolf literally sweeps you off your feet. The key to Oscar’s past might lie with the local fae court—where werewolves aren’t welcome.

Oscar and Mahon are mates—but how can they be together when it might cost them both everything?

The Werewolf’s Fae Mate is an m/m paranormal werewolf/fae romance with a HEA and no cliffhangers.

This is a fun little story, not overly sexed up, but still plenty of Claiming and Mating and MINE MINE MINE.

When Mahon tracks down Oscar, a high faerie, the poor guy has no idea that he is one. He's never heard of magic or shifters or, heaven forbid, faeries. But Oscar is nothing if not resilient.


Prepare for insta love, a wolf who mind talks, a fluffy kitten who thinks he's a tiger, blood bats, and an evil lord.

I wish the story had been longer, because the world building and relationship development were lacking (especially after Oscar and Mahon finally decided that COMMUNICATION! It's a thing.) But that didn't stop me from enjoying the book.

There's plenty of room for a series, too.

This book is available on Kindle Unlimited. Download links are provided as a courtesy and do not constitute an endorsement of or affiliation with the book, author, publisher, or website listed.