Thanks for hosting me to celebrate the release of War Paint from Dreamspinner May 25. This story is part of the States of Love series from Dreamspinner, and is set in Georgia- Decatur, just outside Atlanta. That’s where the big VA hospital is, as well as the CDC. Like a lot of cities, though, the metro Atlanta area is mostly moving into neighborhoods. Cities are just too big to comprehend. Neighborhoods everyone gets.
I’ve been thinking about the nature of conflict in fiction, because it seems we keep up-ing the stakes, with more violence, more danger, more action and lots more guns. This is all conflict that is external to the characters, and the most they get out of going through whatever they are going through is to survive it and end up stronger- sort of a, what doesn’t kill us makes us stronger, sort of vibe. But I had the experience of watching several Japanese shows and noticed something about the way they presented conflict: the characters mostly had a conflict of their own making, and it came out of something they were feeling, like a yearning or a loneliness. They had to work through the reason and settle that before they could settle the conflict. It was a gentle sort of story-telling, but seemed much more real than much fictional conflict I’ve seen.
When I go off the rails, it is usually something I’ve done to myself. I’ve let something go, or there has been a misunderstanding I let go on too long, or I’ve procrastinated until disaster was looming. Most disasters that have occurred in my life, I’ve been complicit in to some degree. It’s not a matter of assigning blame, but of just acknowledging being human, and not perfect. I love the sort of stories that come out of these internal conflicts. When a person who is not perfect meets another, who is not perfect in another way. When you meet someone else, and can see the world through their perspective, that can change everything- both inside yourself, and out in the larger world.
These characters I wrote, Ben and Eli, they were both spending way too much time in their own heads, circling something they couldn’t climb over or find a way around. Only when they could look at the deal through another’s eyes could they find their own solutions. Thanks for reading my stories over the years. 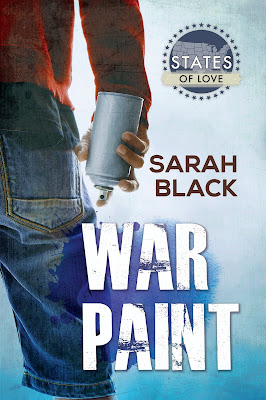 Mural artist Ben has come from Tel Aviv to Atlanta to work on a commission. A successful artist, he’s still lonely and isolated after his family’s rejection. Ben is charmed and surprised when local soldier Eli mistakes him for homeless, and brings him a cup of coffee and a biscuit. This gesture opens the door. Eli is lost, trying to make sense of a future without the Army after a combat injury ends his career.

Art gives them a new language and a path forward. But lost men can reach out, desperate to hang on to anyone close. Is what they find together real, and the kind of love that will last?


Sarah Black is a writer, artist, veteran, mom. She recently moved back to the mountains of Virginia after roaming the world.