Thanks to Sandra and My Fiction Nook for allowing me to stop by on the blog tour for Schooled, the second book in the Codename: Winger series. 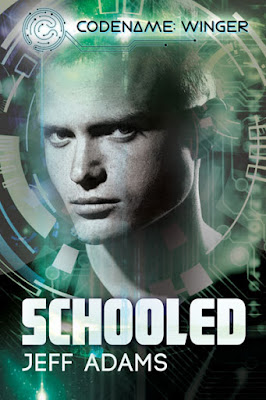 Theo Reese is a high school student who’s also a secret agent. Usually those lives are kept separate, but now he must be both at once.

Theo lends his expertise to his school’s computer science club as they gear up for a competition, but his talents are also required by the covert agency he works for. Someone has stolen an encrypted key that can allow them to control the nation’s energy grids. The possibilities are catastrophic unless Theo and his team can reclaim the file.
Theo locates the file in an unexpected place—the computer science competition. As Winger, his secret identity, he must recover the file and keep his teammates safe from the unscrupulous thieves…. But can he do it without revealing his secrets? He can’t blow his cover, especially with so many of his classmates around.

In Schooled, Theo is staying closer to home and finds himself struggling to keep his secret agent identity separate from his regular life as high school student. He gets pulled into helping his high school compete at a computer science club tournament and, while there, a TOS mission he’s been helping with shows up putting him and his teammates at risk.

One of the people on the computer science team is Dean. Theo and Eddie rescue Dean from a bully one day after school. Shortly after that, as Theo starts working with the club to prep them for the tournament he finds Dean among them.

While I constructed the universe of Codename: Winger to be one where being gay is no big deal, I didn't create a perfect world. There are bullies and Dean, because he's smart and a little awkward, is a target.

As Theo gets to know more about Dean, he uncovers a complex and volatile personality. There are a lot of things about Dean that are similar to Theo and it throws him a little bit. Theo is used to dealing with his friends and understands their moods and personalities. Dean is a challenge and as Theo learns more It's an opportunity for him to use some of the skills that he's acquired as both a teammate and a leader.

Forcing Theo out of his comfort zone is great fun to write especially since he’s a character who always wants to do the right thing. It’s a struggle though since sometimes the right thing isn’t always the clear choice and sometimes he has to choose what’s right for the greater good rather than just him or his friends.

Below is an excerpt showing one of Theo and Dean’s early interactions where Dean is trying to get back at the bully. It illustrates the quandaries Theo finds himself in dealing with him. Make sure to also check out Rafflecopter to get your chance to win a free copy of Schooled and visit the other tour stops to get more chances to win.

This is an excerpt from Chapter 11. Theo is at the mall and finds Dean in the food court, watching Wes, the bully, working at the Gap. Dean has hacked into Wes’s phone.


“You know if he catches you, he’ll beat you senseless, right?” Dean’s look told me to mind my own business, but I wasn’t going to let this go. “Besides, what you’re doing is illegal. Tampering with someone’s phone.”

“Like he’d even figure it out.” He didn’t look at me. “I vibrate it like it’s Gina calling. But when he looks at the screen, there’s nothing there. Do you wanna see the pics he’s got? His camera roll can be kind of hot sometimes.”

I shook my head. Any doubt about who sent the email a couple of days ago disappeared. I snatched the phone out of his hands and kept it out of his reach. At least for the moment, he didn’t try to get it back.

“Why not go to the principal and tell her what he’s done to you? Eddie and I can be witnesses since we pulled him off you.”

“She doesn’t care. Wes has been a thorn in my side for years.” He held out his hand, but I didn’t give him the phone. “Now I can torment him back.”

This was not my specialty. I didn’t know what to tell him. I was lucky and had limited experience with bullies. Yes, Wes tried to torment me a few years ago. And, in sixth grade some guy wanted my lunch money. I’d said no, he got one punch in, but then I’d wailed on him. I didn’t have my TOS training back then, but I still had better reflexes and won easily. While I’d gotten suspended for three days, it set me up as someone not to mess with.

“The school will take action. The athletes all get a big anti-bullying speech at the start of the season.”

“Great for you. It doesn’t seem to trickle down to goons like him who don’t do sports,” he said, voice full of sarcasm. He stood and tried to reclaim his phone, but I moved it out of reach too fast. “I’m not like you. Mr. Jock. Mr. MIT. I’m a scrawny guy who wants to be left alone behind a keyboard.”

In the store Wes looked at his phone again, frowning as he jabbed at the screen. Dean laughed at Wes’s distress.

“Is that why you tried to get into my phone?” I kept his phone, and he dropped back into his chair. “To try to pull this kind of stuff on me?”


He focused on me. “No,” he said, some regret in his voice. “Initially I wanted to see if your phone had vulnerabilities like everyone else’s. I was curious if the big-shot cyber expert,” he said as sarcasm took over, “kept himself secure. Once I pinged you and saw the wall you had in place, I wanted to poke it. I didn’t expect the meltdown.”

I grinned, which seemed to relax him a bit. “Better safe than sorry.”

“It’s a little extreme for a phone, though, isn’t it?” Now he sounded like the guy at the whiteboard on Friday discussing how the team could design its project. “I mean I’ve got a firewall up, but you’ve got extreme security. It’s what I’d expect to find on a government or bank server.”

I shrugged and put his phone on the table between us. “What would’ve been the point?” This time he shrugged but didn’t move for his device. “Here’s what I want to know. Why don’t you lead the class to get the encryption written for the competition? The team doesn’t need me. They’ve got you.”

“I like to stay under the radar. I don’t need another reason for the likes of Wes to mess with me.”

In the few minutes I’d sat with him, he’d gone from mad villain to angry to sad. 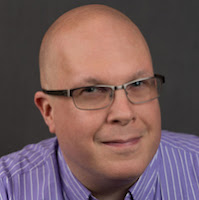 Jeff Adams has written stories since he was in middle school and became a gay romance writer in 2009 when his first short stories were published. Since then he’s written several shorts and novels.

Jeff lives in northern California with his husband of twenty years, Will. Some of his favorite things include the musicals Rent and [title of show], the Detroit Red Wings and Pittsburgh Penguins hockey teams, and the reality TV competition So You Think You Can Dance. 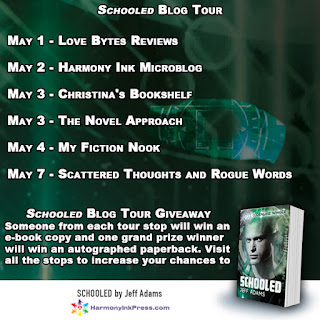