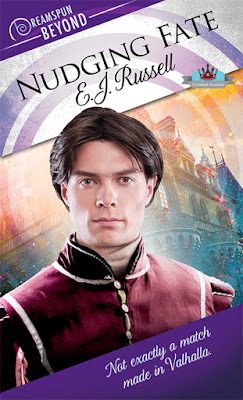 Not exactly a match made in Valhalla.

Half-norn event planner Anders Skuldsson is under strict orders from Asgard not to meddle with Fate. But with Enchanted Occasions’ latest booking—a competition for the hand of Faerie’s one true prince—crashing around his ears, it’s really difficult to toe that particular line. But if Andy pretends to be a contender for the prince…. It’s only temporary, so Odin can’t blame him. Right?

Conall of Odstone’s half-brother, Prince Reyner, was supposed to choose a mate before being crowned and wed. But the idiot left Con to impersonate him. Again. When Con meets Andy, his anger turns to desire… and despair. Even if Andy forgives him for his imposture, how could someone eligible for a prince’s hand settle for the court outcast? And the double-deception isn’t their only obstacle. Unless Andy makes the right choice, their fates could be sealed by…well… Fate.

Thank you, My Fiction Nook, for inviting me to stop by today as part of the Nudging Fate blog tour! Nudging Fate is my first full-length novel with Dreamspinner, and it’s another of my “paranormal romantic comedies.” To celebrate the release, at the end of the tour I’ll be giving away a $20 Amazon gift card and an ebook copy of Cutie and the Beast (another paranormal romantic comedy) to one lucky commenter.

When I get the first seeds of an idea for a story, usually I envision my characters’ function or occupation first before I know anything else about them. For instance, with Stumptown Spirits, my early notes refer to “the folklorist”—it wasn’t until I had more of the plot mapped out that I came up with the name Riley Morrel. In Nudging Fate, my early notes refer to “the event planner,” and “the imposter prince,” and “the real prince.” (No spoilers there—we know from the blurb that Conall of Odstone is impersonating his half brother, Prince Reyner.)
But after I thrashed out the shape of the story, and what the stakes were likely to be, I had to come up with names for everybody.
My event planner turned into half norn Anders (aka Andy) Skuldsson. Andy’s mother is Skuld, one of the three Norns who tend the world tree, Yggdrasil, so his last name was easy. Now Andy was not supposed to be born (he’s the result of Skuld getting busy with a Viking on her one day off in millennia)—and he definitely wasn’t supposed to be male (all norns referenced in Norse tales appear to be female). The name Anders means “manly” or “masculine”—the last thing he ought to have been as a norn.
For my princes—real and imposter—since I was using Spenser’s The Faerie Queene for my Faerie inspiration, I wanted medieval-ish names from the UK. My go-to website for name research is Behind the Name (https://www.behindthename.com). I found my imposter’s name there: Conall, which means “strong wolf” in Gaelic. But his nickname—Con—also hints at the “con” he’s running by pretending to be his brother (even though it wasn’t his idea).
I found my real prince’s name—Reyner—at another website that lists medieval names: http://www.infernaldreams.com/names/Europe/Medieval/England.htm. I chose it because…well…”Reyner” sounds like “reigner.” What can I say? I’ll take the cheap shot if it’s staring me in the face.
Speaking of which…

Andy’s second in command is an undine, a being whose natural habitat is the water. So naturally I named her Brooke. The Enchanted Occasions florist/arborist is a dryad, a creature who communes with trees. Who else could he be but Forrest?
Originally, I called Chef “Chef” because I’d been watching a bunch of cooking shows/movies where the chef was always addressed by other kitchen personnel as “Chef.” It wasn’t until I started working on the next book in the Enchanted Occasions series that I started fleshing out more about goblin berserkers including that they use the description of their occupation as their name when interacting with non-goblin races because their real names are impossible to pronounce for anyone without tusks (and they hate for their names to be mispronounced.)
I wanted a beleaguered kitchen minion for Chef to bellow at. I had recently watched an episode of Supergirl where Kara’s replacement was being similarly bellowed at by Cat Grant. The replacement’s name was Miss Tessmacher, a nod to Valerie Perrine’s character in the first Superman movies. So the kitchen minion became Tessmacher.
What about you? What names have you run into in books or films that you thought were either perfect or perfectly terrible?

Tell us in the comments!

She’s married to Curmudgeonly Husband, a man who cares even less about sports than she does. Luckily, C.H. also loves to cook, or all three of their children (Lovely Daughter and Darling Sons A and B) would have survived on nothing but Cheerios, beef jerky, and Satsuma mandarins (the extent of E.J.’s culinary skill set).


Don't forget to leave a comment to be entered into the tour-wide giveaway!