Series: Love Life #2 (note: can be read as a standalone)

Pretending to be boyfriends is easy. Being accidental husbands is not. 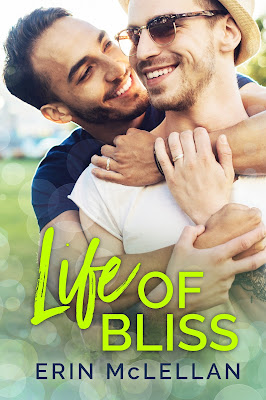 Nobody plans to accidentally marry their frenemy-with-benefits.

Todd McGower and Victor Consuelos do not like each other. They can’t have a conversation without insults flying, and Victor seems to get off on pushing Todd’s buttons. The fact that their antagonism always leads to explosive sex . . . well, that’s their little secret.

Victor has a secret of his own. His full-blown crush on Todd is ruining his sex life. He hasn’t looked at anyone else in months, and he’s too hung up on Todd to find a date to his cousin’s wedding.

In a moment of weakness after a heart-stopping night together, Todd agrees to be Victor’s fake boyfriend for the wedding. Victor will have his plus-one—which will get his family off his back—and Todd will get a free mini-vacation. It’s a win-win.

But pretending to be fake boyfriends leads to real intimacy, which leads to too much wine, and suddenly, Todd and Victor wake up with wedding bands and a marriage license between them. That was not their plan, but a summer of wedded bliss might just change their minds.


Victor ushered Todd into his apartment and immediately turned on some music, hoping to silence the unease pounding in his veins.
He needed about two hours of yoga to calm down and relieve his stress, but who had time for that? Instead he’d opted for the next best thing—a booty call.
Todd took in the apartment slowly, like he was memorizing it, and Victor almost changed his plans. He should never have invited Todd over. He felt more vulnerable showing Todd his home than he would his body.
After months of fooling around in secret every time Victor visited Niles in Bison Hills, he’d learned Todd’s favorite moves. Todd wasn’t a half-dressed, crazy-fast, out-of-control fucker. He liked to take his time and strip Victor completely—of his clothes, his inhibitions, his snark. They normally managed to sneak away to Todd’s two-bedroom house for a few hours at least once a visit, and Victor anticipated those stolen moments as if they were the only breaths of fresh air he’d be allowed.
His crush on Todd was incredibly inconvenient. For one, they hated each other.
Except they totally didn’t. They only pretended to.
Secondly, Todd was Rusty’s ex, and Rusty was his best friend’s boyfriend. Niles and Rusty were soul mates—a one true pairing—and therefore Todd should have been the evil ex.
Except he wasn’t, obviously. Todd, Rusty, and Niles all vacationed together, for fuck’s sake, which was weird, but whatever.
And lastly, Victor’s Todd crush was the reason he didn’t have a date for his cousin’s wedding. It was hard to woo other guys when you were carrying a torch for some fickle motherfucker you only saw when you visited your best friend, who lived hours away.
Todd turned to him and said, “Nice place,” as he dropped his overnight bag next to the kitchen island. That overnight bag was almost too much for Victor. He wanted it to mean something that it didn’t.
“I’m going to change, and then we can go.”
“I wouldn’t mind a shower,” Todd said. “I smell like airplane and Axe body spray.”
“It’s an improvement.”
Todd’s eyes sparked and a frown marred his pretty-boy mouth. That was better. Victor could disguise his longing when they were snarking at each other.
“You could shower with me,” Todd said.
“No. We’ll never leave the apartment if I do that, and I wanna dance. Go shower, and be quick.”
While Todd showered, Victor changed into a loose, cropped T-shirt and his favorite sneakers. Todd reappeared about ten minutes later, dressed in different, but still preppy, clothes and running some kind of product through his wet hair.
He stopped in his tracks when he caught sight of Victor. The music filling the apartment switched to a sultry Frank Ocean ballad, like it was egging them on. In a second flat, Todd had Victor pressed into the kitchen wall, his lips against the base of Victor’s throat.
“Shit,” Todd said, his breath hot on Victor’s skin. “Not fair. That shirt is not fair if you want to make it out the door.”
Victor ground against him to the sexy beat, and Todd’s hands made a circuit up and down his spine, which was suddenly slick with sweat.
“I like to torture you.”
“That’s why you put on a shirt that will show the entire world your perfect abs?”

“Yep.”
“You’re just an attention whore.”
“And you fucking love it,” Victor snarled and then ripped himself out of Todd’s hold.
They stared at each other, tension filling the space between them. Todd’s eyes were bright and the color high on his cheeks in excitement. Or anger, maybe. Victor’s own heart beat wildly in his chest, and his fingers itched to dig into Todd’s flawless skin and tear him apart until nothing remained but their mutual animosity and need.
Having Todd in his kitchen was starting to make him antsy though. Maybe it wasn’t the best idea to have Todd in his home. This was cozier than normal—what with the conversations and overnight bag and whatnot.
Todd took a deep breath and then pressed his forehead against Victor’s neck in a move that was oddly vulnerable. “Thank you for letting me stay here tonight.” His arms curved around Victor’s waist, like a hug.
They never hugged and usually didn’t spend the night. They definitely didn’t get vulnerable. No, they played at hating each other in front of Niles and Rusty and then fucked in secret. Hell, sometimes they didn’t even kiss. Their antagonism had become a weird form of foreplay.
Victor allowed himself three seconds of messing with Todd’s hair before pushing him off. He couldn’t fall for this sweetness. “You ready to go? I taught a bunch of girls how to twerk in class today, and I’ve wanted to let loose since then.”
“What if I don’t want to go dancing? I hate places like that,” Todd said, over-the-top snottiness sneaking into his voice.
Victor rolled his eyes. “You don’t like gay bars?”
Todd glared at him. “I don’t like dance clubs.”
That glare always did something to Victor. Made his stomach clench and his chest ache. Made him want to draw a dick on Todd’s dumb forehead.
“Well, then there’s the door.” Victor smiled. He refused to be the one who changed. The one who gave in.
“I won’t be able to keep up with you, and it’s going to suck.” Todd’s voice was almost contrite and shy, which wasn’t fair at all. A shy, self-conscious Todd would rip Victor’s heart to pieces.
“No one can, babe. Don’t be embarrassed. You can watch.”
Todd’s gaze scorched Victor as it traveled from his lips to his neck, then down his chest and abs before landing on his crotch. “And I’m supposed to enjoy that?”
Victor’s grin was sharp and sudden. “You know you will.” 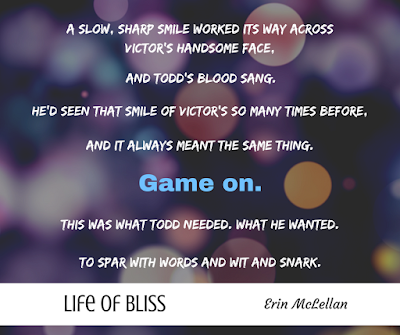 Erin McLellan writes contemporary romance with characters that are complex, goodhearted, and sometimes a little quirky. She likes her stories to have a sexy spark and a happily ever after.

Erin has a bachelor’s degree in creative writing from Oklahoma State University and a master’s degree in library and information studies from the University of Oklahoma. Though no longer a public librarian, Erin still enjoys being surrounded by books and readers, but now she hopes to find her stories on the shelves as well.

Originally from Oklahoma, she currently lives in Alaska with her husband and spends her time dreaming up love stories set in the Great Plains. She is a lover of chocolate, college sports, antiquing, Dr Pepper, and binge-worthy TV shows. 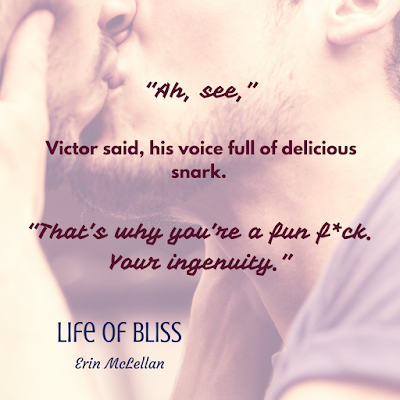