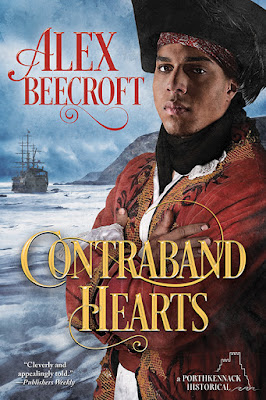 His future depends on bringing the smuggler to justice. His heart demands to join him.

Customs officer Peregrine Dean is sent by his patron to investigate rumors of corruption in the Porthkennack customs house. There he is tasked by the local magistrate to bring down the villainous Tomas Quick, a smuggler with fingers in every pie in town. Fired with zeal and ambition, and struck to the core by his first glimpse of Tomas, Perry determines to stop at nothing until he has succeeded.

Tomas Quick is an honest thief—a criminal regarded by the town as their local Robin Hood. He’s also an arrogant man who relishes the challenge posed by someone as determined and intelligent as Perry. Both of them come to enjoy their cat-and-mouse rivalry a little too much.

But the eighteenth century is a perilous time for someone like Perry: a black man in England. Two have already disappeared from the wrecks of ships. Tomas and Perry must forsake their competition and learn to trust each other if they are to rescue them, or Perry may become the third victim.

NOTE: All profits from the sales of this book are donated to Black Trans Advocacy.

His mother sat at her kitchen table demurely paring carrots with hands that did not waver a jot. But her hair was covered with her shawl, her mouth was pressed tight, and across the table from her, Peregrine Dean sat with a pistol trained on her face.
A hot icicle seemed to crash through the crown of Tomas’s head and freeze-burn his innards. There were innumerable things he could do. Go away. Send a neighbour to ask for Zuliy’s help. Set a fire in one of the derelicts on the beach. Sail past the window and thumb his nose as he went. But even as he thought of them, he was raising the latch, thrusting the door open. Too hard! Too hard—he must not startle the man who held a gun on his mother.
The man was holding a gun on his mother!
Tomas strode straight in, slapped his hands down on the table. The pistol swung to point at him. His mother winced, rose as if to come to him, the paring knife a glint of sullied silver in her fist.
Tomas didn’t try to dissuade her. Didn’t look at her, his gaze fixed on Dean. The man was smiling—damn him—the smile a plush curve on broad lips. Smug as hell.
“What the fuck do you think you’re doing?” Tomas demanded, some semblance of wit beginning to return to him now his mother was out of the line of fire. “By what right do you come in here and threaten a respectable woman? How dare you!”
Dean’s elbows were on Tomas’s kitchen table; his arse was in one of Tomas’s chairs. It didn’t matter that the mouth of his pistol pointed unwaveringly between Tomas’s eyes. He was in the wrong, and he would learn it.
Dean’s brow furrowed. “I know it was you,” he said eventually, the rumble of his voice oddly intimate in the heart of Tomas’s house.
“You know what was me?” Tomas leaned forward, precisely as invulnerable as he had been ahead of the charging horse, and pressed Dean’s pistol down onto the tabletop. “And don’t wave that thing around. Someone could get hurt.”
“I saw you!” Dean’s eyebrows climbed into his hairline, and his eyes widened until the sunlight brought out a glint of bronze in their darkness. “We were this close. You can’t possibly—”
Idiot. Does he think I’m some kind of amateur to be terrified by weightless threats? It rankled, if so. “You saw me where?” Tomas insisted. “Doing what? What could possibly justify this kind of outrage?”
“You’re going to pretend you don’t know?” Dean seemed surprised by the fact, as though London smugglers routinely rolled over to him and showed their throats. And yes, he was a big man with a belligerent presence, but Tomas had grown up in a world where most men were larger than himself. It had ceased to threaten him a long time ago.
His mother wiped her hands on her apron and—disregarded now—left the room. At the sound of the front door closing behind her, Tomas cooled a little, pulling out a chair and sinking into it, relieved.
“I don’t know,” he insisted. “I . . .” He shook his head, like an honest man trying to be civil. A part of him still wanted to break Peregrine Dean’s back for giving his mother a moment’s fear, but that impulse was waning in light of the fact that she was unharmed and out of danger. “I am conscious that you are only doing your job. And that you’re new here and you don’t know what you’ve run your neck into. On my own accord, I am willing to forgive you for mistaking me for whatever criminal you are in pursuit of today. But insult my mother again and there will be consequences. Are we clear?”


Dean stood, monumental and solid, slightly too tall for their kitchen, frowning. Tomas’s heart beat loud in his ears as he watched Dean’s fingers tighten on the pistol—a bullet in the stomach would be worse than one between the ears. But then the fingers relaxed and Dean gave a rueful smile. “I’d like to see you try.” He paused, but Tomas refused to rise to the bait, just watched him, silent now and assured.
Dean uncocked the pistol and tucked it back into the waistband of his sober breeches. His whole outfit said well-to-do professional, probably a lawyer, which was jarring in several ways. This was a man who took himself seriously. Tomas could respect that, and he reminded himself not to get cocky.
“Well, if you’re going to play innocent,” Dean said, “then yes. I have received intelligence that you were involved with the robbery of the customs warehouse last night. I must insist on searching your house for contraband.”
Tomas smiled—tried not to make it too smug. Received intelligence meant that Dean did not have evidence against him sufficient to convince a jury. He knew Tomas had been there. But “a tall, slight man in a large hat, with a mask over his face,” might be anyone as far as the court was concerned.
“By all means look around, since you are here.” Tomas shrugged. He had nothing to hide—literally.

To celebrate the release of Contraband Hearts, Alex is giving away a $10 Amazon gift card and an ebook from her backlist, your choice! Leave a comment with your contact info to enter the contest. Entries close at midnight, Eastern time, on May 5, 2018. Contest is NOT restricted to U.S. entries. Thanks for following along, and don’t forget to leave your contact info!