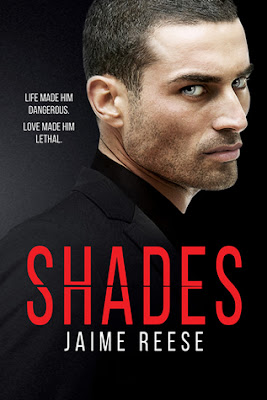 
Killian Marks is a third-generation hitman. After hunting monsters for over twenty years, he lives under no illusions of happily ever afters and fairy tales. Until he meets a man who threatens to disarm him, by giving him hope for a future and showing him there’s more to life than just death.

For Nick, living in shadows is second nature. He’s all too familiar with the dark side of humanity and knows how delicate life can be. Each new day is a gift, even though it means doing it alone. But he’ll risk his survival for the one man who awakens something deep within and leaves him yearning for more.

Nick wants to solve the mystery behind the dark, brooding man, while Killian craves the life and light emanating from Nick. They soon discover they have more in common than either could have anticipated. With both their lives and hearts at stake, they must confront the ghost from Nick’s past intent on tying up a loose end. Only then will they truly find peace, and discover the shades of life in between.

Shades is an edge-of-your-seat kind of book that, despite the suspense and violence, never loses sight of the romance.

(It's also Jaime Reese's first standalone novel, and I hope not her last! I read an ARC of this book, and it was publication ready; no editing errors in sight.)

This is a story about a hitman with a conscience who sets his own rules and the one man who makes him want more.

When Nick, who works as a server at an Italian restaurant, asks Killian his name, Killian tells Nick to call him Ian. It's a half-truth, but, as Nick points out to Ian: You unknowingly revealed your biggest truth.

But Nick has something he's hiding too, something that could put Ian, and their relationship, at risk.

The first half of the book is slower paced but by no means boring. The men get to know one another and form an immediate connection. Despite the age difference (thirteen years), they have much in common: neither lived an ordinary life, and both are willing to sacrifice everything to keep what they found.

This is what life is about. Living, not survival. Connections. Not just breathing and getting through each day.


As Ian learns the full extent of Nick's secret, he's determined to put an end to Nick's nightmares. Nick doesn't need saving, but he can't bear to leave the man he loves.

The main secondary character in the story, Nick's "cleaner" and friend, Dex, provides much needed comic relief. Dex is a smartass who loves to get under Ian's skin. He can't fight worth shit, but he's loyal and smart.

Most authors can't balance action and romance; either the former is an afterthought or the latter fades into the background. But Jaime Reese nailed it.

This book is as much about running TO as it is about running from. The UST was like a live wire and absolutely delicious. Ian was just waiting for that one little word from Nick: YES (it's Ian's favorite word).

The steam is not abundant and somewhat muted (sensual rather than graphic). All the scenes but two fade to black, much to my eternal frustration. Nick and Ian are just so incredibly hot together, I wanted to see them come together in pure, unbridled lust. And they do. Just not on page.

Despite this, I never doubted the men's passion and love. I could see it in every touch, ever kiss, every whisper.

Ian and Nick are connected through the eternal dance of fate. I actually saw the reveal coming as soon as Nick had a flashback to his childhood and hiding in his abusive uncle's closet. I think most readers will figure it out before Ian and Nick do, but I don't think that in any way takes away from the suspense of the story. Indeed, the anticipation of danger about killed me.

Nick, ever calm and collected, is the light to Ian's darkness. Ian has been alone for so long, he's lost hope that anyone could ever really understand him and accept him as he is, not just bits and pieces, but his soul.

Nick accepted him, as is. With all this darkness and shades in between.

The last few chapters were terrifying. I couldn't read quickly enough, because WOW. The ending wasn't entirely what I expected, and that's a good thing.

Never fear, though, because Ian and Nick find their paradise, and Nick says YES again and again.