Max Farrier wanted to follow in the family footsteps and join the Navy once, but he’s better off focusing on just surviving his last year of school and going to work in Aunt Donna’s shop once it’s over.


After an incident at school puts Max in the hospital, Aunt Donna’s had enough. She signs him up for private lessons at a Muay Thai gym. Boxing—she says—will change everything.

But it’s not boxing that starts to poke holes in Max’s stupor—it’s his sparring partner. Cian is fifty percent mouth, fifty percent attitude, and isn’t afraid to go toe-to-toe with a bully in the street. Cian takes what he wants, and doesn’t let anyone stand in his way—not even himself.

This was how everything started—on a Friday afternoon, at the very end of school, three days into the summer term and in the middle of an unreasonable, unseasonable heatwave. It had been a Friday like any other until Tom Fallowfield stuck his boot in.

It went a bit like this, to Max’s admittedly patchy memory of the entire incident.

At three thirty-one, the bell rang, and he was dismissed out of his maths class. Friday was a notorious day for people being bored and at a loose end, so Max had (as was his habit) hurried off to his locker to try to get out of school before anyone caught up to him.

At three thirty-six, Max reached his locker. His fingers fumbled with the lock in a hurry, the metal loose in his grip because it was so ridiculously hot. Sweat was dampening the hair at his temples.

At three thirty-eight, his fingers slipped on the waxy cover of his geography textbook and sent the whole pile tumbling to the floor.

And at three thirty-eight and a half, a dirty Adidas trainer pressed down on said textbook just as Max reached for it.

That was kind of when Max knew he was a bit fucked.

Max swallowed convulsively and gathered the rest of his things to his chest protectively. He staggered back to his feet and turned to shove them all back in his locker. His hands were shaking. There was sweat breaking out on the backs of his thighs and under his arms, pooling in the joints and fleshy bits.

“Oi. You gone deaf, Fatso? All that grease clogged your ears?”

“I said I’m just in a hurry,” he said a bit louder and squashed his other books into the locker haphazardly. The corridor was slowly emptying, and the emptier it got, the faster his heart was beating.

“You’re fucking rude, you are. You ought to look at someone when he’s talking to you. You want Tom to teach you some manners? Tom’s good with manners.”

“Sorry,” Max mumbled, turning hastily before the threat could be carried out. The metal of his locker bit uncomfortably into his back, pressing grooves into his skin, and he could feel his shirt beginning to stick to him. “I’m in a rush, that’s all.”

All three of them were there. Jazz Coles, Aidan Hooper, and Tom Fallowfield. Fallowfield was in Max’s year, the other two the year above. They went to some football club or something together—Max wasn’t sure. All he knew was that Jazz was the clever one, with the orders and the insults, while Aidan was the sidekick who screeched like a hyena and kept them supplied in fags and weed on a regular basis from his older brother’s grow. And Tom…

Tom was the dangerous one. When the insults stopped, Tom started. And nobody wanted Tom to start anything.

“Busy doing what? Got a new girlfriend?”

“Imagine that sweaty sack of lard slithering and grunting on some poor girl. You’d crush her, wouldn’t you, Farrier?”

Max’s face heated up, and his hair stuck to his scalp. He could faintly smell his own underarms, and the metal gluing shirt to back was beginning to heat up too, at Jazz’s cool, slow delivery.

“Fatso Farrier, the flat-fucker. ’Cause that’s what she’d be once you were done. Best stick to boys, yeah? Let your boyfriend fuck you, then nobody’ll suffocate.”

“I don’t have a girlfriend. Or a boyfriend.”

“Just as well,” Jazz continued blithely. “Nobody has a drowning-in-folds fetish. So if it’s not a girlfriend or a boyfriend with some sick kinks, why’re you too busy to talk to us?”

The corridor was empty. Max started to panic.

“What plans? Sale on at Greggs?” Jazz asked. “New bakery opened up? Or is Mummy taking pity on her lonely little wobblebottom, and baked you a chocolate cake?”

Aidan gave a whooping cackle, and Jazz kicked the forgotten geography book towards Max. It skittered across the dusty floor, hitting Max’s shoe with a dull thump.

“Best not leave that here,” Jazz said. Hands in his pockets, pale face regarding him through narrowed blue eyes, he looked calculating—and Max couldn’t figure out what he was calculating. “Oi! Fatso! Pick it up, then.”

“Thank you,” Max mumbled, hoping it would buy him a bit of a reprieve from…whatever Jazz was planning, and stooped to pick it up. His fingers scrabbled uselessly on the plastic cover, wet with anxiety.

That deep rumble was the only warning Max got before Tom’s boot—because of course Tom, totally mad, sadistic Tom Fallowfield, wore boots to school on a regular basis—connected with the side of his head.

Max would have liked to say that pain exploded in his head, that he saw visions of God or heard the heavenly choir, that it was like dropping into a Tim Burton movie.

And then he woke up in the back of an ambulance and knew he was in deep shit.

That was how it started. 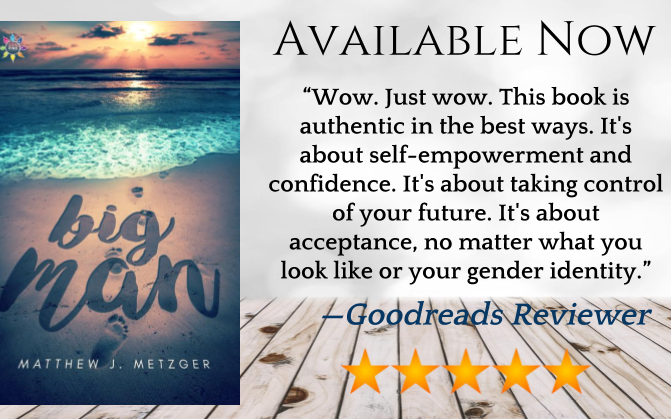 Matthew J. Metzger is an ace, trans author posing as a functional human being in the wilds of Yorkshire, England. Although mainly a writer of contemporary, working-class romance, he also strays into fantasy when the mood strikes. Whatever the genre, the focus is inevitably on queer characters and their relationships, be they familial, platonic, sexual, or romantic.