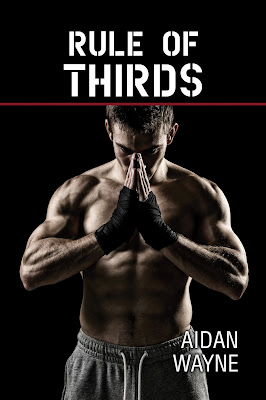 A traumatic past doesn’t have to mean not having a future.

When Jason Diovardi, military elite, is removed from active duty after failing too many psych evals, he has only one goal in mind: get back into the field. It’s all he knows and all he thinks he’s good for, which is why he grudgingly accepts two live-in AI Companions to help him begin to recover from his severe PTSD. Chase and Shade are a matched pair, and Jason hopes they’ll keep each other distracted enough to leave him alone so he can go through the motions and be cleared for fieldwork.

Jason doesn’t expect to actually get better, and the progress he makes with his patient and caring Companions sneaks up on him—and so do unexpected feelings between the three of them. Now Jason might even be able to admit to being happy. But has he healed enough to allow himself to accept what Chase and Shade are offering?

Hope. Love. A reason to live.

I wasn’t a huge writer when I was younger. Well, that’s not entirely true--I wrote a lot of poetry. No, really, I still have a writing journal I kept from ages ten to twelve. I wrote a lot of teenage angst at ten. But I didn’t do full-out stories. I made up oodles of stories in my head that I never actually wrote down (primarily self-inserts in the Elfquest series) and dabbled in fanfiction writing drabbles and one-shots, usually doing gift-exchanges with friends, but that was it.
Then, when I was around fifteen years old, an online friend mentioned that she was doing something called NaNoWriMo. I had never heard of it before, and so I went out to the website and learned about National Novel Writing Month. For those who don’t know, it is basically a personal challenge to write a 50,000 (minimum) word novel in 30 days, the month of November. The idea is to get rid of the “One Day” novelist (“one day I’m going to write a novel”). Most people treat it as a concrete amount of time to bang out a rough draft, and there are a lot of ‘quantity, not quality’ encouragement posts that circle around the forums.
My friend, who writes as Mina MacLeod, was older than me and a wonderful writer, and I really admired her. I was looking forward to her NaNo attempt because it meant I’d probably get to read some more work by her. As for my own participation, there was no way I could write 50k in a month. That was ridiculous.
And yet, there it was, a challenge that so many other people were participating in…

After waffling over it for essentially the entirety of October, I signed up for a NaNo account a week before the kick-off night. Stayed up until midnight on October 31st and then wrote as much as I could to start the month off with a bang.
What followed was a thoroughly butt-kicking exercise in writing more words than I’d ever thought I could write, in between a 7am-4pm day of high school and the homework and studying that came with it. I fell sorely behind by the 30th but, determined to finish, I planted myself in front of my computer and wrote until the very last second before midnight, managing 10,000 words in about six hours.
I submitted my work as the clock ticked down to zero and there it was. I had won. I had written 50,000 words, all on one subject, a start-to-finish book that, at the time, I was very proud of. I liked what I had written. I liked the rush, and that I could do it.
Writing creatively fell by the wayside the rest of the year, but the next November I signed up for NaNo again. And again. And again. I ended up participating in NaNo for eleven consecutive years before I decided to give myself a break.
However, by that time, not only did I like writing books but I knew that I could. I knew I could write in a quantity that was unheard of before. Not only that, but my writing improved with every year. In churning out project after project, even the quality of my work had gotten better. I learned about showing, not telling, about realistic dialogue, and about how to circle edit.
Quantity not quality had turned into quantity and quality. And the more I wrote, the more I enjoyed writing. I started writing stories during the rest of the year, for fun, to escape, because there was a story I wanted to read that didn’t seem to exist yet.
I no longer need the challenge of NaNoWriMo to write my books, though I still do participate in it every once in a while. I even have a YA book coming out with Harmony Ink Press that actually started as a Camp NaNo novel. I owe a lot to the program. It helped shape me as a writer, encouraged me to just put words down onto a page. Even if you’re only able to write ten words a day, that’s ten more words that previously didn’t exist in the world.


One of the mottos of NaNoWriMo is “write with reckless abandon.” I believe in that. If you want to write, if you have a story, an idea, write it down! You can always edit a bad page. You can’t edit a blank one.

Aidan Wayne has been a jeweler, paralegal, neurofeedback technician, and martial arts instructor; and that’s not even the whole list. They’ve been in constant motion since before they were born (pity Aidan’s mom)—and being born didn’t change anything. When not moving, Aidan is usually writing, so things tend to balance out. They primarily write character-driven stories with happy endings, because, dammit, queer people deserve happy endings too.

Aidan lives with altogether too many houseplants on the seventh floor of an apartment building. The building has an elevator, but Aidan refuses to acknowledge its existence.