In our post today, we're going to look at The Stark Divide and The Rising Tide (coming October 2018), both from the Liminal Sky series, with excerpts, plus five little-known facts about Scott. There's also a chance to win one of his books!


First up, The Stark Divide 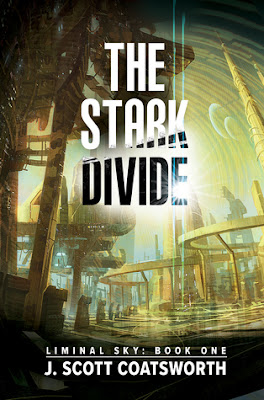 The captain set the final course corrections manually into the ship’s mechanical navigational system. It was safest that way. They had no idea how compromised the ship-mind was, and he didn’t trust the Dressler to get this right.
He locked the corrections in. Slowdown would continue as the ship’s expulsion jets nudged them toward the rendezvous with Ariadne in about six hours, approaching it from behind and traveling at roughly the same velocity.
Behind him, the door irised open. “We’re all set, Doc.” Colin unbuckled his belt and swung the chair around to find Hammond there instead. Holding a cutter.
Holy shit. The ship didn’t have any actual weapons. The Dressler was effectively a delivery service, and no one had found anything out here to be afraid of yet. But right then, Colin could have used a good old-fashioned pulse revolver.
After all, a sonic cutter could make a pretty good weapon.
“Hammond, put that thing down,” he ordered the engineer calmly. “I don’t want any trouble.”
“Sorry, Captain.” Hammond closed the door and locked the controls behind him. “Don’t want a repeat of last time.”
Colin was sweating. Who knew what Jackson was capable of? “Come on, Jackson, no one needs to get hurt here.” He thought about Trip, who might never see him again, and about how far away from everyone and everything they were out here.
Hammond snorted. “Of course no one needs to get hurt. What did you think? That I was here to kill you?”
His fear ratcheted down a notch. “It did cross my mind. After what you did to the ship….”
“It wasn’t me.” Hammond crossed the bridge to sink down in the other chair. “That cross—my cross—it carried some kind of infectious agent?”
Colin nodded. “You brought it on board, Hammond. That fungus is eating away at the ship beneath us as we speak. What were we supposed to think?” His hand casually drifted under the console to the manual comm button.
“I brought it on board? Well, that might be true, but you have to believe me. I didn’t know. My pastor gave that cross to me at my son’s communion last week. I really didn’t know.”
The captain eyed his engineer warily. The man sounded truthful, and Colin was a good judge of character.
Was Jackson an unwitting agent for someone else? The Church? The Interveners? “If that’s true, how did it get tarnished so quickly? The doc thinks it was because of the fungus.”
Hammond shook his head. “That’s easy. It was splattered with some of the ship’s ichor. Things don’t stay new for long in my line of work.”
“Then what’s that for?” he asked and pointed to the cutter. His other hand found and pressed the silent alarm beneath his console.
“What, this?” Hammond seemed to have forgotten the cutter he held. He looked at it strangely and said at last, “I have to save Lex.”

Second in the series, out October 2018, The Rising Tide

with the OFFICIAL Cover Reveal 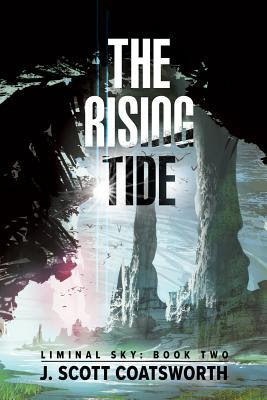 Five years later, the remnants of humanity travel through the stars inside Forever, a living, ever-evolving, self-contained generation ship. When Eddy Tremaine and Andy Hammond find a hidden world-within-a-world under the mountains, the discovery triggers a chain of events that could fundamentally alter or extinguish life as they know it, culminate in the takeover of the world mind, and end free will for humankind.

Eddy, Andy, and a handful of other unlikely heroes—people of every race and identity, and some who aren’t even human—must find the courage and ingenuity to stand against the rising tide.

Otherwise they might be living through the end days of human history.


Lex soared over his world, his golden eagle wings extended to ride the trade winds. He had taken his male form, exulting in it. Some days he discarded gender altogether, flowing through the day without worry for which side of himself he was presenting.
Far below, Earthsea stretched out for hundreds and hundreds of miles, smaller and larger islands dotting the azure blue of the sea.
He’d taken inspiration for it from an old Earth sci fi series, one that spoke to him even if it was just bits of ones and zeroes representing the printed characters of mankind. These humans, some of them at least, were adept at painting pictures using only words, stretching a twenty-six-character alphabet and some assorted punctuation across canvasses as wide as a world. Or larger.
He liked to go there when he was feeling stressed. To soar, to swim, or just to bask in the sunlight for a few moments. It helped him clear his head.
Only part of him was here, of course. The rest was still grounded in the world mind, running its processes, responding to its needs.
Lex shifted his perception. He had no eyes, per se, but he could see through the eyes of the humans he carried, those with loops and those with augmented abilities. Those who allowed it, anyhow.
He also had a small army of biodrones.
Lex could see the universe outside as well, through the sensors embedded on the flanks of the world.
The sun was just a small ball of light from here. Five years of travel had brought them out to the asteroid belt, to their last stop before leaving Sol and her planets behind. The gen ship had been in slowdown mode for weeks as they matched velocity with Isis.
Lex went back to his sanctuary, settling down on a small island whose volcanic cone towered above a black sand beach. His wings disappeared, and his feet crunched on the sand, the waves lapping over them to leave a foamy rime on his toes.
“Who… who are you?”

Lex turned to see a woman standing on his beach, staring at him, her eyes wide open. The woman had black and silver hair, and chocolate colored skin. Lex would have guessed her age to be in her late sixties or early seventies.
He was as startled to see her as she was to see him.
“Are you an Angel?” Her mouth was wide open.
Whoever or whatever she was, she couldn’t be here. It was impossible. Lex checked his subroutines. There were no AI personality files running in his Earthsea sim. And yet… “I’m Lex. And… who are you?”
“Glory.” The woman stood up taller, as if uttering her own name had given her back some of her confidence. “Glory Hammond.”
Lex didn’t pay much attention to the goings-on in the human world, but he knew who Glory was. “You’re—”
“He’s gone. Jackson. I can’t find him.”
How are you here?


Sandra asked me to share five little known facts about me.


One of the above is not true. :P (But which one? Tell us your guess in the comments!)

Thanks for celebrating this fabulous author with us. Come back next week for more of Scott's books, a personal story he's chosen to share, plus another chance to win!