In our final post, we'll take a look at Flames (from the A More Perfect Union anthology) and The Great North. Plus, we'll have our author interview and one more chance to win one of Scott's books. 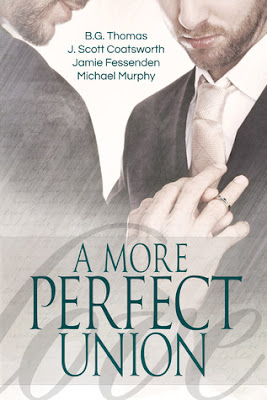 Blurb (for the anthology):

On June 26, 2015, the Supreme Court of the United States made a monumental decision, and at long last, marriage equality became the law of the land. That ruling made history, and now gay and lesbian Americans will grow up in a country where they will never be denied the right to marry the person they love.

But what about the gay men who waited and wondered all of their lives if the day would ever come when they could stand beside the person they love and say, “I do?”
Here, four accomplished authors—married gay men—offer their take on that question as they explore same-sex relationships, love, and matrimony. Men who thought legal marriage was a right they would never have. Men who, unbelievably, now stand legally joined with the men they love. With this book, they share the magic and excitement of dreams that came true—in tales of fantasy and romance with a dose of their personal experiences in the mix.

To commemorate the anniversary of full marriage equality in the US, this anthology celebrates the idea of marriage itself, and the universal truth of it that applies to us all, gay or straight.


From Sandra's review, specific to Flames:

Alex and Gio have been living together for a while. They're in love, but Gio wants to get married, and Alex doesn't. After a massive fight, Alex runs off to cool his heels.

When a fire nearly takes Gio from him, Alex must confront the fact that as his boyfriend, he has no legal standing, when Gio's mother has him removed from Gio's hospital room.


Cinzia Montanari and Alex had a complicated relationship.
Well, maybe not so complicated, Alex mused. She hates me with a passion.
In her mind, Alex had committed three unforgivable sins.
First and foremost, he was gay. Gio’s mother had an almost unrivaled commitment to the Catholic Church and all that it embodied. Although she’d known Alex for going on ten years, her opinion on the whole gay thing had remained unchanged… yet somehow Gio seemed to get a pass on that one.
Second, Alex had taken away her beautiful little boy. Gio would always be her bel bambino—and no one came between an Italian mother and her son. It was a cliché, but for a reason.
And third, Alex had kept Gio in America. Gio had been due to return to Italy after a two-year program as a visiting professor with the University of Arizona, but once they had met, Gio extended his stay indefinitely. Although it had at least as much to do with the university offering Gio a permanent position as it did with their relationship, at least initially, Cinzia Montanari would not be swayed. She still hated him.
Her last name meant “from the mountain,” and she was as immovable as one.
As Alex sat holding his partner’s hand, he thought about the trips back to the bel paese—the beautiful country. They had visited Gio’s family three times over the last ten years to try to calm the waters. With little success. Two of those trips had ended in shouted curses and one in thrown pieces of pottery.
And now, for the first time, la signora Montanari was on her way here to the United States.
It was too much for him to think about right now.
He held Gio’s hand and caressed the back of it gently, where the skin was not burned, with his other hand. The doctor had been by to discuss Gio’s condition an hour or two earlier. It was hard to keep track of the passage of time in here. The big clock on one wall said it was already four, but Alex didn’t believe it. He’d gotten here close to nine, and surely seven hours couldn’t have passed already.
There was no visible response from Gio. The doctor said his body had gone into a coma to allow itself time to recover and heal. Gio’s worst burns were on his forearms and shins. The firefighters had found him huddled in a corner of the kitchen, with his back to the wall and his arms wrapped over his head for protection.


Alex’s heart was breaking, over and over again, to see his beautiful Gio like this. To know he hadn’t been there to protect him. He wished with all his might to turn back the clock and do the last night over. But time, always eager to rush forward, refused to turn back.

Second in the line-up, The Great North 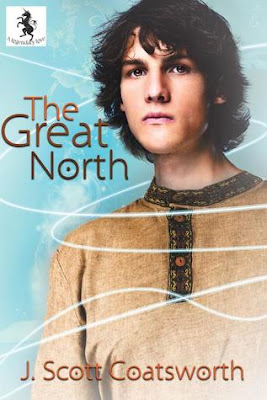 Dwyn is a young man in the small, isolated town of Manicouga, son of the Minstor, who is betrothed to marry Kessa in a few weeks' time.

Mael is shepherding the remains of his own village from the north, chased out by a terrible storm that destroyed Land's End.

Dwyn lay on his back, breathing softly. He didn't want to move. He didn't ever want to leave this moment, this place. Mael.
Out there, beyond the trees and the soft sound of the wind through their branches, was the real world, where his father and the rest of Manicouga awaited him. Where his guilt lived.
Here, in this sacred place beneath the redwood trees, there was only Mael. Beautiful, perfect Mael.
"Did you hate it?" Mael asked, staring down at him, a worried look on his face.
Dwyn smiled lazily. "Not even a little."
Mael's radiant smile was reward enough.
Dwyn shifted, trying to find a comfortable position. There was something hard under his back.
He sat up, and a sudden gust of wind blew through the little clearing, whipping the leaves and dirt around them into the air in a frenzy. He yelped and covered his eyes and heard Mael cry out as he did the same. Dwyn could feel the bits of dirt and debris stinging his skin as he struggled to both cover his eyes and haul up his breeches at the same time.
He shrank into a ball, reaching out and finding Mael's hand, waiting for the whirlwind to stop.
Then all at once, it was over. Dirt and pebbles fell from the air as if they had been dropped, clattering on the ground.
Dwyn blinked the grit out of his eyes and stood. He was covered in dust, and Mael was too.
The clearing had been transformed. Where the ground had been covered with layers of dead leaves and mulch and dust and twigs and debris, now there was a rectangular pad, made of something hard, like stone. In the middle was a rusted metal hatch.
"What in God's name…?" Dwyn said, his fear forgotten.
Mael stepped up to it and pulled on the old handle. It didn't budge. "Come help me with this! I think it's from Before."
Dwyn joined him. Together they pulled on the handle, but to no avail. It refused to lift.
"Go get one of the shovels. We can use it for leverage."
Dwyn nodded. He found his shirt, blown into one of the trees, and pulled it on as he ran toward the fence posts. He found one of the shovels and grabbed one of the unused posts to act as a fulcrum.
Then he ran back to the redwood tree grove.
"Will these work?"
Mael took the shovel and nodded. He inserted the shaft into the handle and gestured for Dwyn to place the post underneath it. Then they both heaved.


With a groan, the hatch gave way, lifting up a hand span. They pushed down on it again, and it popped open, revealing a dusty staircase that led down into darkness.

I write every day, so it’s nothing particular. Having a good story to tell, an idea that makes me grin when I think about it, and the time to write it out are all I need.


I used to be totally seat of the pants. I have a lot of unfinished stories from that time. Now I usually have a general outline for the whole story, but one that leaves enough room for me to wander a bit and for the characters to take the lead when they need to.

I think probably Jaxx from Marionettes in the Mist – sweet and loyal to a fault to his guy, Ashe. And not afraid to tell him when he’s being an ass. Plus satyrs make my heart go flutter…

Oooh, that’s harder. Maybe Rogan from Skythane? He’s such a despicable person in almost every possible way, and really has no redeeming characteristics.

Not sure. Maybe I would have extended one or more of my novellas into full-length stories? That’s one of the main things I get called on in my early writing.

Ithani, book three in the Oberon Cycle) – it will pull together all the threads from Skythane and Lander and hopefully blow everyone away. :P

Yes – I’ll also be getting into self publication this year, with the River City Chronicles, a few rereleases, and the next Queer Sci Fi flash fiction contest book, “Impact.”

Scott lives with his husband in a leafy Sacramento, California suburb, in a cute yellow house with a pair of pink flamingoes in the front yard.

He has always been in the place between the here and now and the what could be. He started reading science fiction and fantasy at the tender age of nine, encouraged by his mother. But as he read the golden age classics and more modern works too, he started to wonder where all the queer people were.

A full list of his books can be found here.

Thank you for celebrating this fabulous author with us all month long. We hope you found a few new books to add to your TBR.