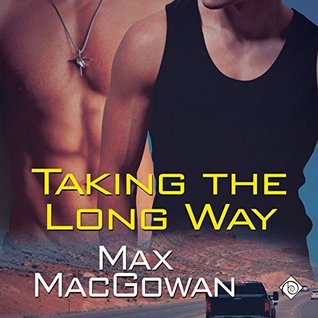 Male escort Rye Bellamy is looking for a way out. Any way out. He’s getting older, and clients are getting more dangerous. If he doesn’t find something better, he knows he won’t survive.

He sees his chance in Marcus Townsend, a functionally blind Army veteran. Marcus, who refuses to accept his condition as immutable, has a shot at seeing a specialist who might be able to help him—but that doctor’s based on the other side of the country.

When Rye and Marcus meet, they realize they can help each other. Marcus can’t drive, but Rye can. Marcus knows what Rye is, but he likes him anyway. In fact, he more than likes him. Driving cross-country with a near stranger is a daunting task, but Rye’s biggest risk is falling for the gentle, stubborn-hearted soldier—and it might already be too late to stop that.

They plan to part ways when they reach their destination, but plans change as the affection between them grows. Now neither wants their journey to end, but continuing means finding a way to bridge the distance between who they were and who they'd like to become.

Excuse me while I gush a little over this one...

I've been very fortunate since realizing that contrary to my original thoughts I really enjoy audio books. I've listened to some awesome stories...some because the narrator was incredibly good...like Greg Tremblay or Nick J. Russo, just to name a couple or because the author has written an amazing story. Authors like T.J. Klune, Megan Derr or Mary Calmes writing books such as 'A Destiny of Dragons', 'The High King's Golden Tongue' or 'Acrobat', just to name a few...or stories like this one by both an author and a narrator who are new to me.

Rye's a rent boy, paid companion, male escort...pick your term; bottom line (no pun intended) he makes his living selling himself. Sometimes we do things out of necessity; whether we like it or not really isn't the issue...for Rye it's survival...it's all he knows.

Marcus is a functionally blind army vet, given the opportunity to see a doctor who may be able to help him...but that doctor's on the other side of the country, and flying is not an option for Marcus because of his injury, and driving...well, did I mention functionally blind. Marcus wants this, and who can blame him; maybe he can recover at least some of his eyesight, but getting there seems like the impossible dream until Rye and circumstances come together to make this a trip that could save them both.

So we've got a male escort, a wounded military vet, and they're making a road trip. Add in some interesting and colorful secondary characters, not to mention a couple of awesome dogs, and back-up all of this with a narrator whose voice totally blew me away. I've come across narrators who have seemed more than a little amazing to me...narrators like Greg Tremblay, Nick J. Russo, Michael Ferraiuolo, Sean Crisden...there really are a lot of good narrators out there and several really exceptional ones...I think if future endeavors prove to be as well done as this one was that Matt Milne will fall into the latter category of being exceptional for me.

Throughout this book it wasn't like having someone read me a story or sitting down with a friend...no, it was better; it was like having Marcus and Rye right there leaning over my shoulder whispering to me as they shared their story with me...now, this may sound scary to some but trust me at times this was really, really hella' hot...like cold shower, fanning my face hot...and sometimes that had nothing to do with the sex...I'ma just sayin'...listening to the story of how these two met and came to care about themselves and to mean so much to each other was simply delicious...I just don't have another word for it.


I honestly can't even begin to explain how much I loved the sound of their voices...both of them just absolutely totally did it for me but especially Rye. There were times that his voice had this slow, sexy, sultry tone that simply melted me the man could have asked me for the keys to Fort Knox and if I had them in my possession I would have gift wrapped them for him.

So simply put Matt Milne is totally on my radar as an audio narrator and while there currently only seems to be 4 books to this narrator's credit, I will definitely be on the lookout for more.

Truthfully, if I had to make one criticism about the narration I guess I'd have to say it was the fact that while the book is set in the United States both of the MCs have a slight British tone to their voices...and you know what, I didn't care. I admit there are times when this is enough to make me want to throw my laptop out the window...not this time...I simply didn't care. I just wanted to keep listening to Rye and Marcus talk...so, there you go, if accents are a big issue for you this might not be the book for you...but just to be sure you should head on over to Amazon or audible and check out the sound clip before making your choice...you might find that you don't care either and if you do than, you've saved yourself some time and money...either way it's all good.

Ok, now that I've gushed a bit about how much I loved the narration of this book let's move back to the actual story. As far as Rye being a 'male escort' I'm honestly neither here nor there in terms of this. For Rye being a male escort as I said was a life choice...he wanted to stay alive and the only way to do this was to be able to provide for himself...so, truthfully who am I to criticize? Sure I can say things like 'well, I'm sure there were other things that he could have done? there had to be another way?' but just like in the real world we can't know the hows and whys of someone's life if we haven't lived it. So to me Rye did what he had to in order to keep himself alive and I can absolutely respect that and to by honest I really liked Rye. I like his caring and his compassion, his snark and the fact that even though he maybe should have been one of the most cynical people out there given the hand that life dealt him he wasn't.

Then there's Marcus...again he should have been someone other than who he was considering his circumstances but for all of his bluff and bluster, he was a good and caring person...Marcus truly had a good heart and I loved his determination to remain so fiercely independent. I couldn't imagine going out into a world that I could no longer really see. I'm pretty sure I'd be hiding in a corner somewhere.

I loved the road trip setting for this one. I am totally a fan of road trip stories and the connection between Rye and Marcus for me was perfect. It wasn't a love at first sight for them it started with simply liking and being comfortable with each other and the banter between these two was filled with snarky humor and often enough honesty to have one or both of them feeling uncomfortable.

'Taking the Long Way' was a story about more than just one journey. Yes, there was the obvious trip across country for Marcus to get to his doctor's appointment but there was also a journey made by each of these men to find themselves...a journey that they needed to make in order to make that final journey that would allow them to find their way back to each other.

I loved this story and yes, it may have some flaws in it but ultimately I connected with it on a level that left me feeling like I'd gone on a bit of a road trip as well, as I traveled along with Rye and Marcus on their cross country journey.

I'm looking forward to more from both this author and the narrator of what is  very probably going to be one of my favorite audio books EVAH!!!

An audio book of 'Take the Long Way' was graciously provided by the publisher in exchange for an honest review.