Audio Book Review: Secrets of You by Skylar M. Cates 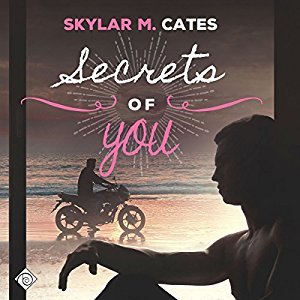 It's never easy to find redemption.

Carrying scars and regrets, River Darcourt avoids too much intimate contact. Among his friends, he is known as a quiet loner. Forget about love. It's not something he will consider...until sweet, young, and tempting Morgan Hayes becomes his housemate. River closed his heart long ago, but the attraction is impossible to deny.

Morgan Hayes needs a change. He is moving out of his critical father's home and in with his friends, including his secret/not-so-secret crush, River. Having feelings for River is a terrible idea. But what is a guy to do when the annoyingly sexy mechanic is just across the hall?

While Morgan has overcome ugliness and is ready for love, he's just not sure River ever will be. They have both experienced pain in their lives. So Morgan dares River to take a chance, and love will either break their fractured hearts in more pieces or, just possibly, make them whole again.

I thought maybe things would be different this time...

'Secrets of You' is the last book in Skylar M. Cates 'Sunshine and Happiness' series and while this is my favorite couple from this series and I had thought that maybe have had some time and listening to the audio version I might warm up to this one  a little more than I had when I originally read the book I have to confess that sadly that has not happened.

River and Morgan are the fourth pairing in this series and while they are my favorite pairing sadly their story didn't really work much better for me than any of the previous ones in this series.

Once again after listening to the audio book and looking back at my original review from nearly a year ago, I find that not a lot has changed for me so I'm just going to borrow some highlights from that earlier review to explain why things aren't working for me...

Morgan has been through such a scary experience when he was attacked behind a club in a previous book but he's learning to deal with his fears and thankfully he was rescued by a mysterious stranger who didn't hang around once he knew Morgan was safe. While Morgan doesn't remember a lot of what happened because he was drugged it was still an incredibly scary experience and he's dealing with it with the help of his friends and his therapist. Morgan's also had a crush on River since the minute he first saw him.

River's dark and brooding and when things get to be too much he jumps on his Harley and he rides. No good-byes, see you laters, I'll be back...he's just gone. He disappears...he runs it's his back-up plan when he can no longer deal. That is until he realizes he's tired. Tired of being alone, of running, of all the dark and bad that's in his life. But mostly River just needs to learn to forgive himself. He's got things in his past. Memories that won't let go of him, things that he blames himself for but maybe...just maybe if he'd open up and talk to someone...he'd gain a better perspective on things and maybe he'd see that while he wasn't totally without blame, he also wasn't responsible for some of it.

I was sure if anyone's story was going to make me gush it was going to be River's. He's been my favorite since the beginning. I can't help it, I like me a dark, brooding man of mystery in my books it just pushes all my hot buttons and River does that...his story...not so much.


When you get down to it this should have all worked for me. I mean seriously worked and yet somehow...I just didn't connect. River and Morgan should have had me crying and laughing and melting into a puddle of goo on the floor...it was all there and it just never happened. So I'm thinking it's me, that's right for whatever reason I'm just not connecting with these stories anymore and sometimes things happen that way.

'Secrets of You' was about letting go of the past and looking for a future, learning to forgive yourself and accepting that who you are is ok and it's who you're meant to be. it's also about really loving someone for the first time and knowing when to stay, when you've only ever run.

Michael Stellman did the narration for this story and this one was by no means a first time listen for me with this narrator...actually it was more like my eighth or ninth audio book narrated him. He's also the narrator for a series that's an absolute favorite of mine. So all things considered I can honestly say that I have no issues with the narration of this book it was well done and a solid performance. At the end of it all it's just a case of 'it's not a bad story, it's just not the story for me'.

An audio book of 'Secret's of You' was graciously provided by the publisher in exchange for an honest review.