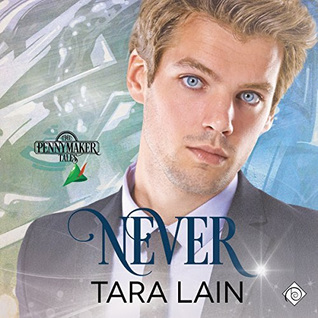 This is a brand new story.

"Never" is the fourth book in 'The Pennymaker Tales' which are all based on traditional fairy tales...the first book was 'Sinders and Ash' based on the story of Cinderella' while the next one was 'Driven Snow' and based on Snow White, also I have to admit this is the one story in this series that I have neither read not listened to on audio and book #3 was entitled 'Beauty Inc.' and you guessed it loosely based on 'Beauty and the Beast'.

So now that you're basically all caught up here we are on book #4 which is entitled 'Never' and yes it is based on the story of Peter Pan. We have Wen Darling (otherwise known as Wendell Darling) and he's raising his brother and sister because Dad was a dull and boring accountant who did nothing but work to provided for his family...how very irresponsible of him and mom was a flighty, ditsy, artistic and totally irresponsible person who was more worried about saving whales and doing whatever it is that flighty ditsy artistic people do then the caring for the 3 children she brought into this world...you go mom!  But be that all as it may, both mom and dad are no longer in the picture...both have departed this plane of existence leaving Wen to be the responsible one.

Wen's managed ok, he's working in an advertising agency and while money's tight he's managed to provide food and shelter for his siblings and himself and he provides acting lessons for his brother, John...and can I just say as much as he seems to love his brother this little dude comes off as an ungrateful little sod at times and music lessons for his sister, Michaela,  who is incredibly responsible for a sixteen year old. Taking care of the her younger brother and just generally playing mother to both of her brothers.

When an advertising campaign falls through because Wen's boss doesn't have the foresight to listen to Wen and use a more innovative approach...there's a silver lining for Wen and his co-workers when they are given the opportunity to come up with a better campaign for the...wait for it...you're going to love this one...PEANUT BUTTER!!! Now come on who doesn't remember Peter Pan peanut butter? Which I believe is still available in the US but I haven't seen it on the shelves here in Canada in a while and Google didn't want to share info about Peter Pan Peanut Butter with me...it did tell me that 'Skippy Peanut Butter' is no longer sold in Canada. Personally I'm a Kraft Peanut Butter fan myself...oops, sorry I squirreled again...back to Wen and his advertising dilemma...


Faced with the prospect of an opportunity that could make or break is career Wen and the team throw themselves into the job and after a long and exhausting not to mention fruitless day Wen heads home to his family. It's this trip home that changes everything for Wen as he's waiting for the subway train to take him home he encounters an unusual girl with a parasol and the most extraordinary piece of artwork he's every seen...the problem is the artworks been done on the subway walls by a graffiti artist who wants to remain anonymous.

With the encouragement of his siblings Wen stakes out the subway station where he saw the artwork in the hopes that he'll return. So far I'm loving this I mean it's good. The characters are solid and with the arrival of Peter and his gang they become even more interesting and things begin to happen...not all of it's good either.

Kale Williams is the narrator for this one as he was for the previous stories and as with 'Beauty Inc.' the only other book I've listened to on audio he did an admirable job. I like his voices and they suited the characters quite well...especially Tink, I enjoyed his voice for Tink and Shamu (sorry, I'm not sure about the name or spelling on this character...it's the downside of audio books, you can't do a quick reference to check things like spelling) anyways, this character was one of the lost boys and we also have Hook and Smee (actually I believe his name was Hooker, but whatever we all know he's the bad guy and he sounded like one too. His voice had just a bit of a 'you don't want to trust this dude sound to it) and of course Mr. Pennymaker was back and sounding very much like the Mr. Pennymaker that I remembered from Beauty Inc. this is bonus because I love it when a character's voice stays consistent from story to story which is one of the reasons that I totally support having the same narrator for a series that carries the same characters from book to book even if the MCs change if the central core of characters are basically the same having then sound the same in book 5 as they did in book 3 goes a long way towards contributing towards listening pleasure for me.

So we have a cute story, good characters, solid narration (on a scale of 1 to 5, I'm giving the narration a solid 4) and also on the upside the cheese factor that bothered me in 'Beauty Inc.' didn't seem to be here...so, why only 3.5 and not say 4? 4.5? or even 5 stars  you might wonder...well, it was the ending. I was enjoying the hell outta' myself here boys and girls...I mean fun times. I like a cute, fluffy story as much as the next person and this one was all that minus the overabundance of cheese and the ending didn't have to much cheese...nope, nope, nope the ending for me had more sap than a forest of maple trees in the spring time and add to that the fact that even though this story like the fairytale was suppose end with 'and they all lived happily ever after' I couldn't buy it not when it felt like one of those characters wasn't totally on board with the HEA and seemed to resolve himself to more of an 'ok, whatevs I get hot monkey sex. So let's do this thing' type of attitude and that my friends is as close as I'm going to go in terms of details as to why this went from 4+ stars to 3.5 rounded down in those places where 1/2 stars don't exist.

An audio book of 'Never' was graciously provided by the publisher in exchange for an honest review.

Thanks for stopping by. Happy reading!