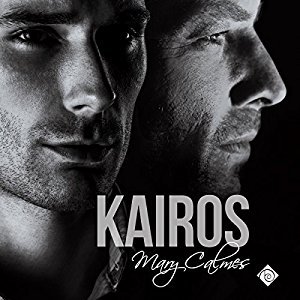 Sometimes the best day of your life is the one you never saw coming.

Joe Cohen has devoted the past two years of his life to one thing: the care and feeding of Kade Bosa. His partner in their PI business, roommate, and best friend, Kade is everything to Joe, even if their relationship falls short of what Joe desires most. But he won’t push. Kade has suffered a rough road, and Joe’s pretty sure he’s the only thing holding Kade together.

Estranged from his own family, Joe knows the value of desperately holding on to someone dear, but he never expected his present and past to collide just as Kade’s is doing the same. Now they’ve stumbled across evidence that could change their lives: the impact of Kade’s tragic past, their job partnership, and any future Joe might allow himself to wish for….

What is it about me and this story?

In the world of Mary Calmes stories I sadly have to admit this one is not at the top of my list but in a effort to be fair when I saw that it was out in audio book format I was helpless to resist and needed to give it another try...now, on the down side the narrator was not one of the usual suspects...I've gotten use to my Mary Calmes books being narrated by Greg Tremblay, Tristan James or Sean Crisden...not that there haven't been other narrators...there have, it's just been a while. So I freely admit I did take a moment to pause when I saw that Michael Fell was the narrator, but I decided that since I've listened to other audio books narrated by him and had no complaints I needed to not be snobbish about this and give the man a chance so I did and given that my rating for this went from 3 stars to 3.5 stars, I'd say that Mr. Fell held his own on this one.

However, overall my feelings about the story haven't changed so again I'm not into re-inventing the wheel so I'm going to steal from my original review as to what wasn't working for me...

it was ok but that connection that I usually feel and just the overall fun of reading a new Mary Calmes book wasn't there. Try as I might I never quite felt the connection between Kade and Joe and honestly neither of these men struck me as being overly dynamic or alpha...for me there just wasn't a Sam Kage or an Ian Doyle, no Trevan Bean, Ceaton Mercer or Darius Hawhtorne...dammit!!!! Where was my ober alpha male!!! Because I'm telling you neither Kade or Joe filled that role for me
...and...
Along with the lack of connection between the MCs that happened for me there were parts of the storyline that just weren't working for me. The biggest thing being Joe's reasons for leaving his family...it just wasn't convincing for me which created a bit of a domino effect in regard to why Joe and Kade were such good friends. Along with this was the fact that Kade knew that his so called friend and mentor Vaughn who was also a precinct captain did shady things and yet he idolized him anyway? Sorry, I don't get that much less that fact that he basically made a conscious decision to ignore this. Somehow no matter how hard I tried 2 + 2 was just not adding up to 4...maybe more like 3.5.

in true Mary Calmes fashion I could not totally resist her writing prowess because irregardless of how I felt about the overall story, she drew me in with her mom's...there was Joe's mom...I adored her...ok, I can totally relate to her. She had a very dry sense of humor and used it frequently to deal with situations...

"You could maybe tell other people what is going on in your head now and then."
"But I'm telling you now."
"But did you tell him?"
"Shouldn't he know after this many years?"
"Mom--"
"I can't be married to a stupid man, dear. What would people say?"
"You don't give a good god--"
"That was sarcasm, sweetheart. Do they not have that in Chicago?"

It's that mom instinct...you see someone who needs to be loved and sheltered from the world and it's just instinct to want to do what the world has failed to do for that person so far. This is one of my favorite things about Mary Calmes books not only are the characters bigger than life but there's often at least one or more character who brings things like 'mom love' to the story in such an overwhelmingly big way. Nothing gives me a warm fuzzy like that moment in a Mary Calmes book when a character...in this case Joe's mom sweeps in takes one look at another character...and in this case it was Kade and Declan and just instinctively knows that they need 'mom love' and in this book there was two of them there was Joe's mom and Donatella Gallo who was his family's housekeeper and cook.

So maybe not my favorite Mary Calmes story but still a pleasant enough read that I'm sure I'll be revisiting it at some point in the future and I'm also pretty sure that at some point I'll be reading a book and going...'Oh, I remember that. That happened or that person was from the book 'Kairos' because when it comes to Mary Calmes that seems to be just the way the world rolls.

An audio book of 'Kairos' was graciously provided by the publisher in exchange for an honest review.