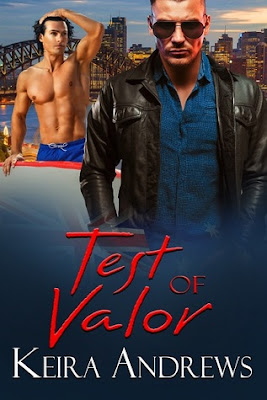 
They’re free of the White House, but can their forbidden romance survive in the real world?

This gay romance from Keira Andrews is the conclusion of the Valor duology. It features a May-December age difference, sex on the beach, and of course a happy ending.

I had no idea Keira was planning a followup to the amazing Valor on the Move, which landed on my Best M/M Romance of 2015 list and ended on a very happy note. I fully expected Rafa and Shane to be driving off into the sunset.

The first thing I want to know when an author writes a followup to a non-cliffie book is: Does it fuck with the characters' HEA? Because if it does, I'm out of there.

And the answer to that question is NO.

Yes, the two men have to deal with some conflict, but they come out on the other side all the better for it.

Shane, a former Secret Service agent, is a tough guy who doesn't want to appear weak. Protecting people was his job for years, so he's loath to tell Rafa about the nightmares (flashbacks to Rafa's kidnapping) that still plague him.

Rafa gets frustrated with what he perceives (accurately, I think) are lies of omission and loses his cool, accusing Shane of not trusting him. Rafa is big on being treated like a man, not a boy. He gets enough of that from his parents. Even though he loves how safe he feels with Shane, he wants to be an equal partner.

Conflict also arrives in the form of Rafa's parents (former president and first lady), especially his mom, who is not a fan of Shane and hopes the relationship is a phase. Fat chance of that, but she's pretty ruthless in manipulating Rafa.

For the most part, this is a relationship-driven story, although there is some excitement and adventure. I have to say I wasn't expecting that particular plot point, but I liked it; it added some intensity to an otherwise quiet story.

At the end, Rafa and Shane are stronger than ever and get an ever better, sparklier HEA. I'm all over that!

If you loved the first book, you'll like this one for sure. However, Test of Valor cannot be read as a standalone.