ARC Review: Stand by Your Many (The Mannies 3) by Amy Lane 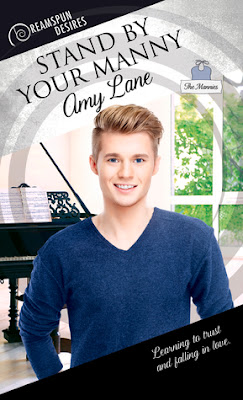 
Sammy Lowell has his hands full juggling his music, college, some pesky health problems, and making the uncles who raised him proud. He needs help fulfilling his after-school duties with his siblings. Nobody can be in two places at once—not even Sammy! An injury puts Cooper Hoskins in a tough spot—if he can’t work, the foster sister he’s raising can’t eat. But years in the foster system have left Cooper short on trust, and opening up to accept help isn’t easy. Luckily, family intervenes—Cooper needs a job so he can care for Felicity, and Sammy needs someone who can see past his illness to the wonderful things he has planned for his life. Each heals the damaged places in the other’s heart. But falling in love is a big responsibility for young men deep in family already. Can the two of them get past their fear of the immediate future to see forever with each other?

Stand by Your Manny is pure adorable, fluffy goodness. If you're looking for a book about family that's all sweet feels and little angst, you'll love this story (which I suggest reading as part of The Mannies series).

Sammy is a college student majoring in music and the best big brother ever. But in some ways Sammy behaves like a child. He has emotional issues related to eating and often forgets to eat all day. I'm guilty of that too, but I don't have aplastic anemia. Sammy does though, and his body can't handle his crazy schedule.

Cooper, a foster kid who aged out of the system and is taking care of his younger foster sister, carries the weight of the world on his shoulders. Cooper is so used to going at it alone, he hates asking for help and depending on anyone. But when he's seriously injured on the job, he has to accept help from Sammy's family, who takes in every stray (seriously, just knock on their door).

The story is rather low on the steam, which was slightly disappointing considering both Cooper and Sammy are virgins. The first-time kisses and touches were ever so tender though.

Cooper and Sammy jumped into friendship first. Cooper was so good at taking care of Sammy and standing up for Sammy's right to adult on his own.

Even though Sammy is 20 and Cooper 21, this read like a YA story. Their relationship was built on comfort, homemade juice, and hugs. It didn't feel all grown-up. And that's not a bad thing necessarily; I just prefer more mature MCs.

I shall be miserable if I have not an excellent library. ~Jane Austen