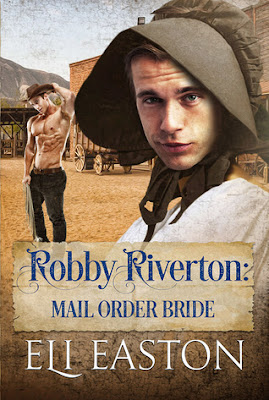 
Being a fugitive in the old west shouldn’t be this much fun.

Damn, what a kerfuffle. If only Trace can get rid of the fugitive while hanging on to his own stupid heart.

With a title like Robby Riverton: Mail Order Bride, this book had to be good.

And it was. It really, really was.

"This isn't the same as the gal's clothes or table manners or fake archways in fake castle walls. This is a serious matter. A man's life. My life."


After witnessing a murder, Robby Riverton, just making a name for himself on the New York stage, has to hightail it out west before he's a dead man. On the coach, he meets a lovely but flighty woman named Rowena, on her way to marry a man by the name of Crabtree in Flat Bottom, New Mexico Territories. Rowena is knocked up (she has a thing for handsome) and absconds with a banker.

When the gang of criminals catches up with Robby, he has no choice but to become Rowena: some restitching, makeup, shawl, bonnet, and tah-dah! the NEW and improved Rowena is born. Robby is an actor after all.

Robby may be good, but he's not good enough to fool Trace Crabtree (not the groom; that would be his brother Clovis). Maybe it's the male energy or the broad shoulders ... or maybe it's the 19th century American frontier equivalent of Gaydar, but the first time Trace sees Rowena, he knows something is up and soon discovers Robby, who's all man, beneath the skirts.

Damn Robby Riverton, anyhow. He was like a litter of puppies—loads of rambunctious trouble and just as appealing.

Robby's rather uncouth family members play a big role in the story. Rowena is Clovis's betrothed after all. Pa-Pa paid $200 for her, and damn straight she's gonna marry his boy. So what if he's hairy and has no table manners? That's how things roll on the Crabtree ranch in Flat Bottom.

Robby as Rowena immediately bonds with Marcy and Emmie, Trace's sweet but mousy sisters-in-law who have the misfortune of being married to his two older brothers. The women sport mysterious bruises, but, as Robby notices, so do the men. What in the devil is happening on that ranch? The answer, by the way, is nothing nefarious but it IS freakin' hilarious.

Robby and Trace start meeting on the sly, and Robby is so ready to shed the frilly dresses and get hot and bothered with Trace. There's a good amount of steam in this story, but plenty of talking and bonding too.

Trace sees beyond Robby's act and charm to his intrinsic goodness. He sees that Robby treats Trace's family with kindness, knows how to manage Pa-Pa, and befriends Marcy and Emmie, as well as the kids. Robby feels guilty for fooling the Crabtrees, especially poor Clovis, who's already been rejected by the woman he wanted to court. Robby even gives Clovis a makeover, and then everyone wants one.

But Trace belongs in Flat Bottom. He's the sheriff after all. And he's lazy (or so he claims); why do anything else?

The chapters alternate between Trace's and Robby's POV, and their voices are entirely distinct.

I don't want to get too much into the plot, because half the fun is in the discovery, but let me say this: if you don't love this book, I dunno if we can be friends.

The family antics (those Crabtrees sure are creative in finding entertainment); the light spoof on Western shootout films (mobsters, horses, and guns); the sizzling chemistry between the MCs; the incredible characters (not just Robby and Trace, but all of Trace's crazy family and Rowena too); the daring rescue (Trace saves Robby's life not one but twice!); the GREATEST HEA (I may have swooned reading the epilogue) . . . it all adds up to one sexy & wild ride.

I had so much fun reading this book. I smiled and CHEERED and just all around enjoyed the hell out of it. This is one of Eli Easton's best! Don't miss it.