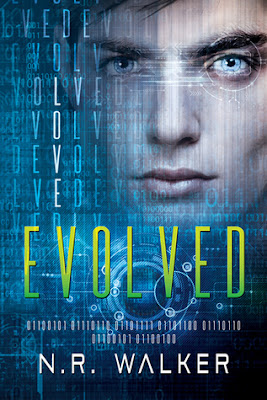 
In 2068, androids are an integrated part of human life. Big Brother no longer just watches from the shadows. It’s in every household.

Lloyd Salter has OCD issues with noise, mess, and he’s uncomfortable with human interaction. When his ex claimed the only thing perfect enough to live up to his standards was an android, Lloyd dismissed it. But two years later, after much self-assessment, Lloyd thinks he may have been right.

Bear with me as I try to find the right words.

So is amazing. And unique.

Lloyd never imagined the A-class android he ordered would be so much more than the sum of his mechanical parts. Shaun, designed to Lloyd's specifications, from his height to his striking blue eyes, is perfect in every way—perfect for Lloyd.

Lloyd, a college professor, is structured, quiet, and brilliant. He loves to read and discuss literature, but hates messy spaces and noisy people. He has one friend, Jae, who is equally obsessed with order. Lloyd isn't an adventurous guy. He enjoys being at home but is a little lonely.

Lloyd's ex-boyfriend suggested Lloyd should get himself an android, so that's what he did.

Shaun has been programmed to match Lloyd's desires, not just sexually but intellectually. And soon Lloyd can't fathom being without Shaun, of whom he no longer thinks as an android, but a being, his partner, his mate.

Lloyd is respectful of Shaun. He never treats him like he's less. And the two talk long into the night and exchange lingering kisses.

One of Lloyd's favorite books is Moby Dick, and Shaun has his own analysis of this literary classic. He claims, for example, that saying Call me Ishmael doesn't prove the protagonist's name is Ishmael. After all, people can call you anything they want, but only you know who you are inside.

I would not be as Ishmael was. I wouldn't survive it, while all I lived for disappears under the surface.


The first half of the book is a slow exploration of Lloyd and Shaun's relationship. It's tender and HOT. And I mean SCORCHING. N.R. Walker wrote a seriously sexy book, y'all. And I, for one, couldn't be happier.

And Big Brother (in this case, SATinc, the company that built Shaun) is always watching.

I was so incredibly anxious by the last chapter, I was convinced Nic had written a cliffhanger and swore I'd never forgive her. But I knew there was an epilogue, so a glimmer of hope remained.

And, holy hell, did the ending deliver. It was symbolic, cathartic, and joyful all at once. And it sealed this book as one of my favorites of the year.

So much more than a romance, like Shaun, Evolved is pluperfect.