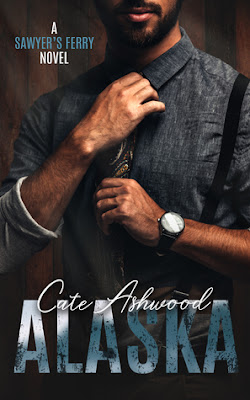 
Nobody says no to a Prescott.

Not even one of their own.

Holden:
Living up to expectations had never been easy, but when I went after something, I got it. Success. Money. Victory. I was standing on the doorstep to having it all. There was only one thing standing in my way.

Gage:
Power and prosperity are overrated. Especially when they come at a price. When enough became enough, I walked away. Nothing had ever tempted me to look back, until one day the past showed up in my backyard.

I’m not so sure I can walk away a second time.

I'm not a fan of winter, but I absolutely love reading books set somewhere cold and snowy. Maybe it's the whole "thank god, it's you, not me" aspect, but I've always been fascinated by Alaska. It just seems so remote and wild.

Holden means to leave Sawyer's Ferry, Alaska behind and return to New York. He did his dad's bidding and failed. Gage, the man Holden tracked down, wants nothing to do with Holden's father; he left the medical research company they formed together behind two years ago and is perfectly happy practicing surgery in Sawyer's Ferry, population 10,000.

So what if Gage is the hottest man Holden's seen in a long time? There's nothing between them.

That's what Gage tells himself too. He's used to living alone, but all of a sudden he's asking Holden to fill in for a surgeon who's been injured, and Holden's moving in with him. Temporarily, of course.

These guys are really good at denying their feelings, but despite that, there really isn't a lot of angst here; it's all about the relationship. I kept worrying there was going to be a big breakup scene, and I so hate manufactured drama and crazy fights for the sake of keeping the MCs apart; it's exhausting.

Fortunately, Gage and Holden are more mature than that, and the romance never falters. This was really refreshing, and I applaud the author for not throwing in a bunch of melodrama.

This story is super sexy, one of Cate Ashwood's steamiest books. Yes, please. I want some more of that.

I liked the secondary characters, and the way Holden finally stood up to his controlling father. I loved the gorgeous epilogue and see much potential in this series. I hope both Holden's friend Frankie and Gage's friend Logan get a story (maybe together?).