Nine Stories of Lessons Outside the Classroom

By Virtue Fall by Kashmira Majumdar – The rules have changed…and so have the consequences for breaking them.

Striking Gold by S.A. James – Sometimes when we think we have no choice, life brings something brighter.

Lessons for a Lifetime by Hudson Lin – A second language, a first chance at love.

Welcome to Ms Skinner’s Freshman Composition by Aila Alvina Boyd – After auditioning for a play, professor and student find themselves cast opposite each other as romantic leads.

Piece of Cake by Valentine Wheeler – All Richard wanted was a nice, quiet retirement. His kids aren’t going to let that happen.

Professor Ghost by Damian Serbu – An otherworldly mentor might be his way out.

Bare by Jack Harbon – When a passion for art turns into something more.
The Botanist’s Apprentice by Arden Powell – Don’t get too close to the flowers.


Full Marks by Asta Idonea – When Jacob seeks out his favourite lecturer at a university reunion, will he get full marks?

By Virtue Fall by Kashmira Majumdar

Jonah Shapiro is no model student, even by the lax standards of his preppy New England boarding school. His penchant for rule-breaking and leather makes him the bête noire of his teachers—except the earnest, tea-drinking, cardigan-wearing Mr. Donovan, who’s determined to not give up on Jonah. Life used to be simpler five years ago when Mr. Donovan was just Head Boy Nick and Jonah’s best friend. Easier, too, for Jonah to kiss him when it was dark and no one was watching. Now the rules of the game have changed, and so have the consequences for flouting them…

The day Daniel met Silver shone brightly for a number of reasons. It was the last day of high school, but it was also the day he realized he could never leave home. Being the son of an alcoholic mom didn’t leave many choices for Daniel. He could only hope that life and love would treat him kindly.

Jacob Corby decides to attend his university reunion for one reason only: Professor Hobbs. Arthur Hobbs is surprised to see loner Jacob’s name on the attendance list, but it is enough to make him change his mind about going to the event. After all, he’s always harboured forbidden feelings for his favourite student.


Lessons for a Lifetime by Hudson Lin

When high school English teacher Patrick signs on to teach an adult ESL course on the weekends, he doesn’t know his life is about to change. Into the makeshift community center classroom walks Salim—tall, soulful, a refugee from Ethiopia with a heart for storytelling and a talent for music.

A midwinter offer to drive Salim home after class one week leads to the breakdown of the student-teacher boundary. As their relationship grows, the prospect of moving in together brings out both their insecurities about commitment and money. But working through differences makes them stronger and Patrick soon realizes that perhaps he had been the student all along.

After auditioning for a college production, a first year professor finds herself being cast as the romantic lead opposite her least favorite student. Just as it appears as though the production is going to be an utter failure, something clicks. From there on out, chemistry between the two of them no longer needs to be faked.


Piece of Cake by Valentine Wheeler

Richard’s daughters are worried about him, alone in his house after retirement, so they sign him up for a cooking class at the local community center. But what he ends up finding is more than just baked goods.


Antonio arrives on campus for his first day of college a little overwhelmed from the experience of moving from a rural area to the big city, not to mention that he firmly planted himself in the closet and intends to stay there. When a ghost appears before him on the first night, his terror gradually gives way to curiosity, as this hot specter promises to mentor him toward a better, and out, life at college.

Before his best friend went away for vacation, Levi Singh promised her that he would take life by the balls and live on the edge. So, when the nude model for his art class doesn’t show, Levi takes it upon himself to volunteer. To his surprise, no one seems to be staring too long at him. No one, that is, except for his professor.

When Noah Rose suggests working with him on an assignment after class, Levi suspects he might be looking for something else. Something Levi will happily give him.


The Botanist’s Apprentice by Arden Powell

Graduate student Eli Katz approaches the accomplished botanist, Robert Lord-Harding, to request access to his greenhouse of magical flora. Though Lord-Harding is reluctant to take on a new apprentice after the scandal of his last one, he is intrigued by Eli’s academic work, and agrees.

Eli is primarily interested in the violet man-eater, a carnivorous plant that preys on men by emitting a certain pheromone, luring them in close and then devouring them. Eli wants to return the man-eater to its classic status as a sexual performance enhancer, and spends his days studying the plant. But is it as safely secured in Lord-Harding’s greenhouse as they both believe, or will its pheromones wreak havoc with their new apprenticeship? 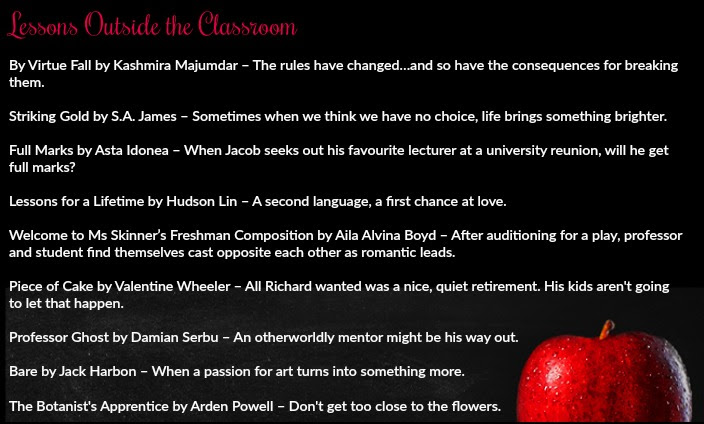