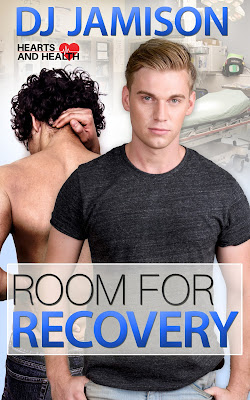 Beau James isn't out, but he's not fooling anyone. When he's cornered by two bullies, he's rescued by none other than the broody Wade Ritter, who he's crushed on from afar. Despite their family connection, Wade has resisted all of Beau's attempts at friendship -- until now. His protective streak gives Beau an opportunity to get past Wade's prickly exterior.

Wade considers Beau to be a quasi-cousin. He's been careful to keep Beau in that box because he is too tempting to a gay boy determined to remain in the closet after his coming out went all wrong. But when Wade sees bullies harassing Beau, he offers to help. Little does he know this small crack in the walls around his heart is the opening Beau needs to move in and change Wade's life.

After years off the rails, Wade realizes there's room for recovery. If he can face hard truths about his sexuality and love himself, he might be able to love Beau too.


Room for Recovery is part of the Hearts and Health series. It contains cameo appearances by other characters in the series, but it can be read as a standalone. 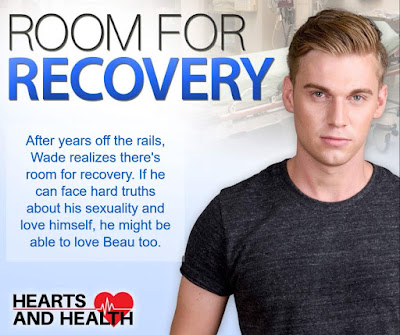 He balanced on the orange-and-brown plaid couch in Barry Gleason’s basement, a cup of beer sloshing in one hand as he tried to dance to rap blaring through Barry’s speakers. Tried to dance, as in, couldn’t dance to save his life. It was painful to watch — Beau thrust his slender hips completely off-beat — but it was also hard to look away.

It was hot in the small room with so many bodies crowding in, and Beau’s curly hair was frizzing into a halo around his flushed face. A halo for the angel, Wade thought sarcastically. A sheen of sweat made Beau look as if he were glowing. Or maybe that was the huge smile on his face, beaming his care-free, drunken joy to everyone in the room.

That smile did squirrely things to Wade’s insides. It always had, which was why he worked so hard to make that smile disappear when they were together.

He’d known Beau was gay from the moment they met three years before. With puppy dog eyes full of adoration, Beau’s crush on Wade hadn’t been subtle. Wade tried to keep his distance — because annoying or not, Beau was cute — but that was easier said than done when their families were intertwined. Wade saw Beau for Sunday dinners with the James family, for Thanksgiving and Christmas and birthdays in between.

And now, as the drunken star of Barry Gleason’s party.

Barry’s parents let kids drink, so long as none of them drove, so his house was the go-to party spot. Wade didn’t often come to these parties, but Anna had dragged him out and promptly disappeared to gossip with her friends on the cheerleading squad. He tried not to feel too relieved about that. He wasn’t in the mood to have an armful of girlfriend.

Glancing around, he noticed a couple of guys holding up phones, taking pictures or videos. Beau was going to be embarrassed come Monday morning.

“Take it off,” someone called.

Beau laughed and fluttered his eyelashes. “I don’t get naked with a guy before the second date!”

Wade was afraid things might get ugly if Beau didn’t get home soon. He had perfected the art of avoiding Beau, so he searched the room for someone who might know him. Beau mostly hung with the same two friends. Wade scanned the room and spotted Beau’s friend, Nathan something, near the television, where a video game was under way.

Nathan was tall, with dark, messy hair and skinny as a skeleton. Wade mostly remembered because of his height-to-weight ratio. Taller even than Wade, he towered over Beau when they stood side-by-side. Usually a cute, freckled blond girl stood between them, but he didn’t see her.

Nathan held a game controller, and Wade realized he was one of the players. Two others were seated in gamer chairs low to the ground.

“Dude!” a familiar voice said. “I didn’t know you could do that!”

Wade wasn’t surprised to see Shane tucked away in the gamer’s corner. His best friend was addicted to video games. He was more surprised to see Anna in the other chair, fumbling with a remote.

“How do you fire? I forgot which button to hit.”

Shane leaned over and nudged her index finger onto the A button. His hand lingered on hers a fraction longer than necessary, and Wade narrowed his eyes. Was his best friend trying to make a move on his girlfriend?

He wasn’t jealous, exactly. He’d been relieved not to have Anna all over him tonight. It was more the principle of the matter. He shelved his irritation for the moment and turned to Beau’s friend.

The guy was focused on the game, and it took him a minute to respond.


There was a hint of suspicion to his voice that made Wade wonder what Beau had said about him.

Nathan hit the pause button, and Anna protested loudly, before she noticed Wade standing there. She smiled brightly and jumped up.

“Hey, you. I thought I’d lost you to a love affair with the wall.”

Wade rolled his eyes. She thought she was funny. She was, which was part of her appeal. If only the rest of her appealed to him. Try as he might, he couldn’t get excited about the thought of the make-out session they’d have before he dropped her off at home later.

He rushed off, and Wade watched him intercept a guy trying to hand Beau yet another beer. There was laughter and boo’s as Nate coaxed Beau off the sofa and led him toward the door. Wade couldn’t hear their words, but he could tell Nate was pissed as he flipped off someone and pulled a stumbling Beau out the door.

Anna wrapped a hand around his bicep and leaned close. “I’m done playing games. You want to get out of here?”

Wade cut a glance to Shane, who stared at the television, despite the game still sitting on pause. He seemed to be avoiding watching them together, and Wade felt a fleeting sense of guilt. He knew, even before he saw them together tonight, that Shane was into Anna. But Shane had the hots for everyone. Wade didn’t take it seriously. Now, he wondered.

“You want to come out for a burger, Shane?” he asked.

“I’ll drive. We can get your car tomorrow.”

“Okay.” Shane unfolded himself from the chair. “If you’re sure I’m not going to be in the way?”

“Come with us,” Anna said easily enough, which was another reason Wade liked her. She was easy-going and genuinely a nice person. “It’ll be fun. Wade’s pretty to look at, but he’s not much of a conversationalist.”

“Fuck you say?” Wade said, though he wasn’t really offended. When she looked as if she was about to apologize, he added, “I’m not pretty.”

Anna and Shane busted up laughing, and Wade headed for the door.

Before they got in the car, Shane pulled him aside. “You’re sure I’m not a third wheel? You could just take me home.”

“Would you stop? I’m pretty sure we both like you enough to hang out for a burger before we tear off our clothes.”

Shane rolled his eyes. “Thanks so much for your patience.”

“No problem. What are friends for?” Wade joked.

But for all their playful banter, Wade was beginning to think that if there was a third wheel in their little trio, it might actually be him.