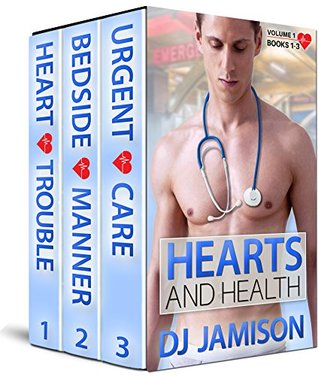 
Three full-length novels in a m/m romance series have been boxed up for one price! Sexy nurses with trust issues, overconfident doctors coping with reality checks, and hard-working students come together to find their hearts and health in small-town Kansas.

"Hearts and Health" Vol. 1 is a compilation of the first 3 books in this series. So I'm going to basically break this review down into 4 parts first I'm going to talk about the series in general and then I'll do a brief review of each of the books.

The series...overall I've enjoyed this series and while I think you could probably read the stories as standalones and not become lost, I would definitely recommend reading the stories from the beginning and in order. Each book has a different couple as the MCs and in subsequent stories they become secondary characters which for me makes the overall reading experience more enjoyable as the reader is given the connections between the characters as and when they are made helping to create an overall more complete picture.

The stories in 'Heart and Health' are each set within the medical community of the fictional town of Ashe, Kansas and this series appears to be a spin-off from the author's original series 'Ashe Sentinel Connections' since 'Heart Trouble' is the first book for this series and the 6th book of 'Ashe Sentinel Connections' I'm going to guess that I've made a safe assumption with this. Now that I've given you a little bit of background about the series from a very general perspective...let's move on the the individual stories.

Book 1 - Heart Trouble
Karen's rating:  3.5 stars
ER nurse Ben Griggs has basically sworn off of men. He's had his heart broken one time too many. But when Gage Evans enters the emergency room where he works after a motorcycle accident Ben's life is thrown into chaos when Gage sets his sights on the sexy, sweet nurse and try and he might Ben can't seem to fully deny that he's attracted to the man that he believes to be an adrenaline junkie.

I liked Gage and Ben as a couple they were cute together and as individual's they seemed like genuinely nice people. While their relationship seemed to be more tangled up by assumptions and miscommunications than anything else getting to know this pair as their lives collided and they went on a series of unusual dates was sweet and enjoyable. For me the connection between Ben and Gage was there but not as strong as I would have liked it to be.  Ben and Gage's relationship was a bit of one step forward and two steps back because of misunderstandings and miscommunications and the individual insecurities and self-doubt that both men had but while it might have been a bit much for some I found that this all stopped short of that over the top mark for me and I enjoyed this first book a little more than average as well we get to meet a number of secondary characters who show up in subsequent books like Zane and Paul who are the central figures in...

Book #2 - Bedside Manner
Karen's rating:  3 stars
We were introduced to both of these characters in book #1. Zane is a student of Gage's and ends up in the ER as a patient where he meets Ben and Dr. Paul Johnston. But it's Ben and Gage who help Zane and take care of him once he leaves the hospital until he can get  back on his feet...taking him in and looking after him until he's well enough to be on his own moves in with his friend, Xavier.  However, Ben and Gage remain Zane's surrogate parental units much to Zane's annoyance at times.

Zane meets Dr. Paul Johnston for the first time when he's to say the least 'not at his best' and while the good doctor notices that Zane's an attractive young man in spite of his injuries even he's not pervy enough to be comfortable with any kind of attraction given Zane's state when they first meet.

This one's definitely a slow burn as both men have other issues that they're dealing with.

This was definitely my least favorite of the stories in this volume. I wasn't a fan of Paul in the first story and that didn't really change much here. The age gap between these two was a bit more than I'm comfortable with and not just because Paul was literally old enough to be Zane's father but because of the actual age of each man. Paul's just this side of 40 and when they initially meet Zane's not even 21. One man's established in his life and career and the other's just starting to stretch his wings and become independent ...for me there's a power dynamic here that just doesn't work and while the story was ok, I struggled with that age difference enough that it definitely put a damper on things and kept the story from being one that I could truly enjoy...so let's just say this one's on me and call it a day. I know a lot of people out there wouldn't have an issue with this so it's very much about personal preference in my eyes.

Book #3 - Urgent Care
Karen's rating:  4 stars
We were first introduced to Xavier back in book #2 as Zane's roommate. Xav's a nursing student and he's what most would call a mature student. It seems that when Xav graduated high school he had family who needed him so it took him a bit of time to get back to school to complete his education and become a nurse.

Trent's a part of Xav's past...a part that Xav thought was done and over with until the day that he approached Xav in a local gay bar. It's been 12 years since these men have seen each other. A lot has happened...a lot has changed except for the fact that Trent still loves Xavier and wants him back. Xavier's still got feelings for Trent...strong feelings but he's not sure that he's willing to trust Trent with his heart again.

This was absolutely my favorite story from this group. I loved this one. Trent and Xavier worked for me. I'm a total sucker for second chance stories and this one was heart meltingly sweet...not sugary over the top sweet though. There were issues that both of these men had to work through before they could fully commit to making things work. There was steam and heat and a very palpable sexual tension between these two men.

So at the end of it all while I could have done a pick and choose thing with the stories in here I can honestly say that I enjoyed and appreciated each story more for having read the one before it.

An advance copy of this book was provided by the author in exchange for an honest review.