Blogtour: When Everything Is Blue by Laura Lascarso

When Everything Is Blue

When they were kids, Chris Mitcham rescued Theo from the neighborhood bullies and taught him how to “be cool.” Now, years later, Theo’s developed feelings for his best friend that arise at the most inopportune times. Theo hates lying to Chris, but in coming out, he might lose the one person who understands him best, a risk he’s not willing to take.

You know we’ve all done it. That casual hook-up that was only meant to be once or twice, but then became a regular kind of thing because it’s easy, satisfying and we all have needs.

In When Everything Is Blue, Theo is trying to wean himself off crushing on his best friend Chris, who he believes is straight, because there is always some contingent of blond babes hanging all over Chris whenever they go out. Additionally, Theo’s having real trouble with popping boners whenever Chris comes around, which is super Not Cool.

Then a new kid at school makes a move on Theo, and Theo embarks on his first series of casual hook-ups with Asshole Dave—if you read the book, you’ll understand how he got that name and why he probably still deserves it.

I actually got a real kick out of writing Theo and Dave’s relationship. Like most friends-with-benefits situations, you can tell that each of them want something a little different out of their situation. Theo wants to get over his best friend and Dave might actually want a real boyfriend-boyfriend relationship with Theo, only he doesn’t exactly know how to go about getting it. The tension inherent in two people wanting different things is what makes this dynamic so satisfying.

You can probably guess that it doesn’t end well for these two, but even in the most casual of relationships, there is real opportunity for characters (and people) to learn and grow. And not all relationships have to last a lifetime or be all encompassing. Many times the friends-with-benefits is what the participants need at the time—some regular intimacy without all the emotional investment and responsibility of a committed partnership.

It definitely has me thinking about a future friends-with-benefits situation that blows up spectacularly before turning into something more.


“No,” I interrupt him. Chris can’t have it both ways. He can’t have me as his ever-faithful lap dog and expect me to just sit around and watch him hold court with every hot babe that struts through Sabal Palm High. It’s not fair. I’m friggin’ lonely. Dave is there, and he’s into me. He’s not Chris, but he’s not nothing either.
“Maybe I’m too dependent on you, you know?” I say to him. “Like, for the past five years, it’s just been you and me. And I do whatever you tell me to.”
“You don’t do whatever I tell you.”
I give him a look. We both know Chris gets his way more often than not.
“So, Dave is like, Chris 2.0?” He winces as though the thought physically pains him. As if.
“No, he’s not. Dave is just a guy I hang out with. He’s funny and we… get along. You can’t be the only person in my life. You have your surf friends and your family and your girlfriends and I… I just have you.”
I swallow the lump in my throat. I hate getting emotional in front of him. Makes me feel like such a baby. Chris stares at me. He no longer looks angry; he looks hurt. His gaze drifts out to the water. His lower lip juts out, tempting me still. What would Chris do if I just leaned over and pulled him in for a big, fat kiss? With tongue. Probably freak out.
“You can drive us home,” Chris says, completely deflated and still not looking at me. He cleans a patch of dust off the dashboard with his finger in a slow spiral. “I’m sorry for giving you shit. You can hang out with whoever you want. I won’t bother you about it again.”
I want to say something to make him feel better, but I don’t know what, so I toss my stuff in the back and take the shortest route home, trying to concentrate on the road and not on Chris, who stares out the window the whole way with his arms crossed in front of his chest, looking sad as hell.
The exact thing I wanted to avoid is happening—I’m losing my best friend.

Laura Lascarso wants you to stay up way past your bedtime reading her stories. She aims to inspire more questions than answers in her fiction and believes in the power of storytelling to heal and transform a society. When not writing, Laura can be found screaming “finish” on the soccer fields, rewatching Veronica Mars, and trying to convince politicians that climate change is real. She lives in North Florida with her darling husband and two kids. She loves hearing from readers, and she’d be delighted to hear from you. 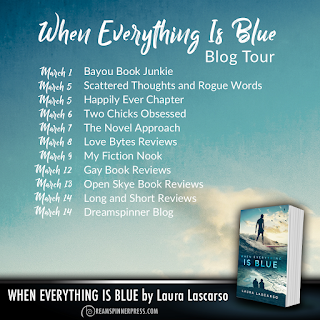