Yes, this is different than other stories I’ve written. I enjoyed writing TOUCH though it caused me some tears. It was necessary, I had to go through the dark with Foster in order to get the story how I wanted it. I really how you can check it out and be sure to review it on the DSP website! 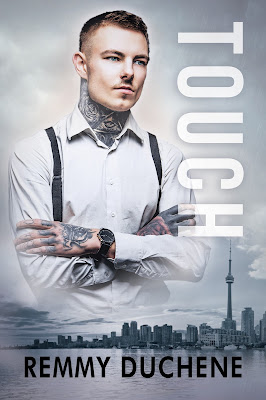 One can’t walk the path of darkness and expect to escape unscathed.

At eighteen, Foster Erickson stepped out of the closet into a world of homelessness, prostitution, and drugs. Years later, he’s pulled it together and is ready to rebuild.

Determined not to let the demons win, Foster starts university with a plan to keep others from making the same mistakes he did. The last thing he expects is Sylvester Roberts.

After years of working with his father, Sylvester decides to step out on his own. University at his age is strange, but for him, failure isn’t an option. After flunking a few tests, Sylvester’s professor assigns him a tutor—Foster Erickson. The moment they meet, Sylvester knows Foster isn’t like other guys.

As the darkness hovers and Sylvester begins falling, he will have to decide if helping Foster fight his demons will be worth it in the end.


Foster Erickson sat in the front of the unmarked police car and tapped his fingers against his thigh. People hurried to and fro, few stopping to talk, for hugs, or a handshake. Foster wondered how people could do that knowing the messed-up things human beings did to each other. “You know in Japan, bowing is a good thing—the deeper the bow the more trust it’s said you have for the person you’re bowing to.”
“Well, I’ve learned something new today,” Detective Jason Culling said.
“Sorry. I feel like my chest is about to explode.”
“I’m used to your randomness. I’ve been your friend long enough to know that when you get really nervous, you spew bits of knowledge.”
Foster turned to look out his window and sighed.
“Don’t put so much thought into it, Foster.” Jason continued after a silent bit. “It’s not all that bad.”
But it was that bad. For Foster it was like the first day of high school all over again. At twenty-seven, he should have been well on his way to a career, maybe finding a little house and settling down. Instead he was looking at his first day of university. To say he was terrified would have been the greatest understatement of all time.
“You can do this,” Jason said.
“How do you know?”
“You have a job now and from what I hear you’ve been doing great.”
Foster glanced over at his friend. “You’ve been checking up on me?”


“Of course.” Jason dragged his fingers through his dark brown hair. “I’ll always check up on you—you should now that by now. What I’m trying to say is, you’ve managed to hold down this job for, what? A year now? This is nothing compared to serving buzzed, oversexed clowns more booze.”
Foster had to chuckle at that.
“Look, Foster. I know you’re scared and that’s to be expected. You’ve been preparing for all of this for the past two years. The center wouldn’t have recommended this if they didn’t think you were ready—that you’re strong enough.”
“I don’t know, Jay.” Foster rubbed his sweaty palms into his thighs. “This may have been a bad idea. I don’t feel ready.”
“We never feel ready—do you think I felt like it was time to make detective? But I accepted the job, and look at me? Sure, it’s scary, and you know there are some fucked up days to come, but you can’t let that stop you.”
Foster glanced down at his fingers then up and out the front of the car again. “Look at all those people. They look so proper and put together, and here I am, tattooed and pierced. How am I supposed to fit into that?”
“Since when did you start worrying about fitting in? I thought you said normal was for losers.”
Foster said nothing. He’d said that, sure, but that was when he never thought he’d make it out of his hell. That was when he was perfectly happy being the emo freak, curled up in a corner with a needle sticking out of his arm. But he was clean now, lucid, and he desperately wanted more in his life.
“When was the last time you painted?” Jason broke the silence.
“I haven’t painted since—after my second attack. Painting used to make me feel pure. I don’t see how I could ever get that sensation again.”
“Come on, Foster. Why don’t you use your art as your calming place? If today gets too hectic, you go home and whip out the paint and brushes.”
Foster had to admit he liked that suggestion. But even if he did want to follow Jason’s suggestion he couldn’t. He’d tossed out all his supplies years ago. “It’s not that easy.”
“I don’t agree.”
He swallowed the growing lump in his throat and licked his lips. As his tongue passed over the tip of the small hoop in the corner of his bottom lip, Jason frowned. “If I call you to get me….”
“You won’t. You only have two classes today and they won’t be much of classes anyway.” Jason shifted in his seat. “You’re just going in, getting your syllabus, get to see what kind of asshole your profs are, and leaving. When you’re finished, I’ll be right here to take you out for a coffee.”
“But if I called you….”

Remmy Duchene is a Canadian-hockey-watching-baseball-playing kind of guy. He loves walking in the rain and bugging his friends about his latest story ideas. Remmy believes that true love comes in all shapes, sizes, and sexualities.

He is always saying "I'd rather see two gay people in love get married than two straight people that hate each other."