Her answer was that a story often comes from not one idea, but several. She gave the example for her multiple award winning story, “The Last of the Winnebagos.” Ms Willis lives in a part of Colorado which is quite mountainous and frequently gets trapped behind a motor home going some horribly slow pace, and while chugging along at 25 or 35 miles an hour—uphill—she’d think that there had to be a story there. Say, what if there came a time where such big gas suckers became illegal? But it wasn’t enough to write a story. And she also had an idea about a time where almost all animals died, most especially pets, and that it became a criminal offense of the highest to kill or cause harm any animal. Not enough for a story. But together? Yes! A story! Which as I said wound up winning her multiple awards.

That is what happened with, “Orange.” It was something like two years in the borning. But multiple ideas came together to make a novel.

1) I was at work one day and I from quite a distance away I saw these two guys talking (I work in a huge warehouse-style building).  They were standing very, very close. One was wearing a bright orange shirt. I remember that so clearly. And I am telling you, from a distance, from my angle, it looked like they were about to kiss! I was actually getting…um…aroused. I really thought they were going to kiss! Sadly, they didn’t…but it got me thinking. But it wasn’t enough for a story.

2) I don’t know so much about heterosexual people. I’m not one. But in the gay community, we tend to romanticize and eroticize uniforms/clothing/costumes etc. that have masculine connotations. Policemen, firemen, soldiers…even the UPS man in his brown shorts. It’s amazing how often the UPS man is hot. Or has a hot body anyway. All that running and jumping out of trucks I guess. Interestingly, I knew this guy who fantasized about men in those prison orange jumpsuits. Especially those men you see by the side of the highway cleaning up garage and stuff. “Bad boys,” he would whisper, his voice all husky.  Story idea there, I thought. But not enough….

3) I used to know this guy who got laid quite often by brazenly approaching men in public and saying, “Hey! Want a blow job?” Sometimes someone would take a swing at him. But a shocking about of times men said yes. Even straight men. One said to him once, “Well, I’m not gay. But I’ve always told myself I would never turn down a blow job.” Certainly, an idea for a story. But not enough. And yet….

See, the thing is, I don’t write per what’s trending. A least not if it isn’t a trend I like (for instance, I am finally writing my first shifter book, but it’s because I found a shifter I want to write about). I think writing for a trend will come across as false to the reader. So if I was going to write a fairly sexual story, it still had to be honest with characters I could believe in and love.

What if my guy who randomly approaches guys for sex and has a two-night stand rule, meets someone who gets under his skin? Someone who touches a part of himself that he didn’t know existed. What if my guy didn’t believe in love because he’d never seen love he could believe in? Until he meets the right guy.

And what if the right guy has always suspected he might be gay, but denied it, even in his days of having to wear that orange jumpsuit and was housed with hundreds of other men? What if he gives in to the guy who hits on him on the street…and discovers that “might be gay” is something far more than “might be?”

Suddenly I had a story I could believe in. And write. And fall madly in love with both my heroes...! 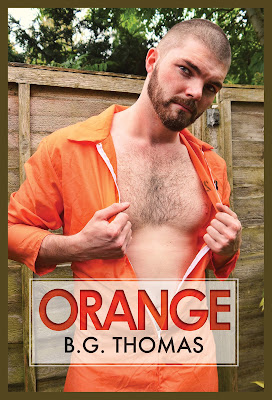 Frank Sinclair believes only in the visceral, the real, what he can touch and taste. After all, his mother left him when he was five years old, so how can love exist? His next sexual conquest is what makes his world go around, not romance and happily ever after. The hot guy he sees working along the highway in an orange jumpsuit fuels his bad-boy fantasies. Coincidentally, the guy shows up at the gas station across the street from his apartment building, and you can bet he’s going to take his shot.

Roy Ingalls is his bad boy parolee in orange, and he’s ready and oh-so-willing to be Frank’s next conquest. But Roy isn’t quite the bad boy he seems—deep down he’s sweet, naïve… and the most intoxicating man Frank has ever met.

The sex is the best of their lives, but can a man who mistrusts love and another who isn’t ready to admit he’s actually gay ever move beyond friends with benefits?

And if you want to know the answer to these many questions, why you’re just going to have to read the book! I sure hope you do!

In 2015 he made an entry every day in his blog “365 Days of Silver” where he found something every day to be grateful for.

Leave a comment below and be entered in our giveaway for one e-copy of either RED or BLUE, by B.G. Thomas. Be sure to leave contact information. The giveaway ends on 3/7/18 at midnight EST.