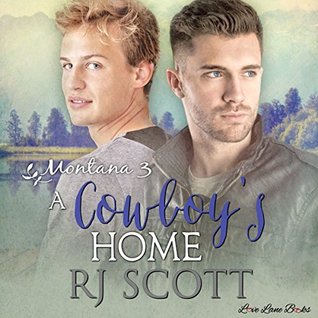 
One burned and broken man finds his way home. Can he find peace in the arms of a man easy to love?

Justin made the ultimate sacrifice for his country, battling domestic terrorism, never the man he really was, using hate to avenge the death of his best friend. The friend he'd killed.

What he doesn’t count on is getting shot, and if he's going to die he wants it to be on Crooked Tree soil. Home.

Sam is as much a part of Crooked Tree as any of the families, and the offer to buy into the ranch is a dream come true. But falling for a hidden, secretive, injured man isn’t the way to keep his head in the game.

'A Cowboy's Home' is the third book in RJ Scott's 'Montana' series and it's filled with the  answers to my questions and more.

Justin's alive but he's not anyone the man that he ever wanted to be. He's served his country, he's sacrificed everything for his country and the chance to avenge his dead best friend...only his best friend as we well know isn't dead.

When Justin gets shot...suddenly plans change and Justin wants to go home and the only place that's ever been home from Justin is 'Crooked Tree Ranch'. Justin makes his way back to the ranch hiding out in one of the unused cabins where he thinks no one will find him but that's because he's not counting on 'Sam' the chef and now part owner of Crooked Tree Ranch. Sam's tenacious and when he suspects there's someone hiding out on the ranch his curiosity is piqued more than a little bit and he pokes around until he finds what he's looking for and he's determined to help the man who's so obviously sick and desperately in need of help.

As I had hoped when I discovered that this was going to be Justin's story my questions were answered and I got a hella' good story as well. Sam's been in this series since the beginning and he's an adorable, feisty, spitfire who's added a touch of color from the word go. So I liked that he got a bigger role in this story and he got someone who needed him and ultimately fell in love with him.

But 'A Cowboy's Home' was more than just a romance story between Justin and Sam. It's a story about 'coming home' finding love, forgiveness and peace. It's about second chances and new beginnings. It's life giving you what you need which isn't always what you might want.


While I really enjoyed this one, I think I needed a bit more relationship development between Justin and Sam. This one had a lot of info to share with the reader and at the end of it all I just felt that Justin and Sam were a bit short changed...not enough to spoil the story for me but just enough to make me wish there'd been a little bit more for these two.

Sean Crisden was again the narrator for this series and he totally stepped up and made this one every bit as enjoyable of an audio experience as the previous books.

Even though all my questions have been answered about Justin and Adam and what happened to them, there's still one more story to be told in this series and while I'm going to wait for the audio book for this one and I've got my fingers crossed that Sean Crisden is again the narrator, I'm really hoping that my wait won't be too long for this one.

By the audio book: